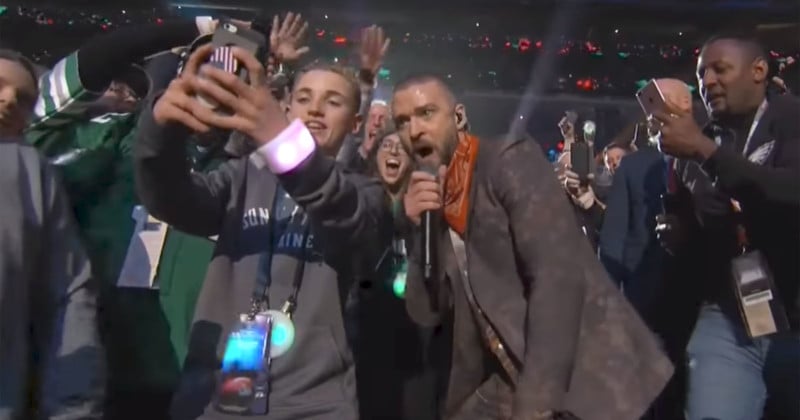 A 13-year-old 7th-grader is Insta-famous today after he snapped a selfie with singer Justin Timberlake on national TV during the Super Bowl halftime show.

Ryan McKenna found himself next to Timberlake during the concert as the singer walked up into the crowd. As Timberlake passed McKenna, he noticed the boy’s phone and posed for a quick selfie:

McKenna then posted the selfies to his social media accounts… and they went viral.

Justin Timberlake is the best guy ever

What a time love you

It seems that major media outlets are talking more about McKenna’s selfie than about the halftime show itself:

STORY: Just caught up with 13-year-old Ryan McKenna, the kid that took a selfie with Justin Timberlake at #SBLII. He's a seventh-grader at Derby Academy in Hingham, Mass. I think it's safe to say he'll be the most-popular kid at school when he returns. https://t.co/h6ls14kgxY

Here's the selfie that 13-year-old Ryan McKenna took on his iPhone with Justin Timberlake during the halftime of the Super Bowl. "I just went for it," he said. McKenna is a Patriots fan from Hingham, Mass. and is already scheduled to be on Good Morning America tomorrow. pic.twitter.com/oaxx3aaPEq

That boy who took a very public selfie with Justin Timberlake is a seventh-grader at a Hingham school. https://t.co/U3bMzce4l6 pic.twitter.com/Y6lIGJyCdL

McKenna appeared on both TODAY and Good Morning America today to talk about the selfie:

“I just thought to myself, ‘I’ll never get this opportunity again in my whole life.’ I just went for it,” McKenna tells the St. Paul Pioneer Press. “My phone is almost dead. I’ve gotten so many notifications […] It was already crazy to be at the Super Bowl in the first place. Then all of a sudden I’m up on the jumbotron and everyone is talking about me. I can’t believe it.”

How to Capture Heat on Camera Without Expensive Optics