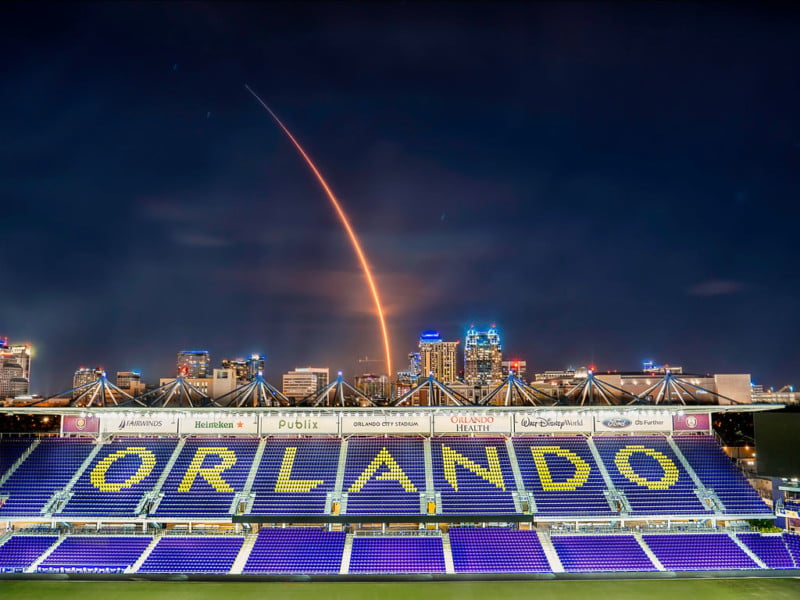 As a photographer that isn’t associated with any news media, it can sometimes be difficult to get access to certain opportunities. With space, this is especially true, since access normally means the ability to place a camera near a launchpad in areas that are heavily restricted. This is a story of how it can never hurt to ask for permission.

The first time I required a “big” camera to capture an image was for a rocket streak shot. This type of shot shows a rocket launching at night streaking through the air. It is created not by combining hundreds of images in Photoshop, but instead by using a long exposure. When any digital picture is taken light has to hit a sensor and be recorded. When there is a ton of ambient light or fast action, the shutter has to be open for a very short time (small fractions of a second). A rocket streak shot is the complete opposite of that – the shutter needs be left open for very long periods of time in “bulb” mode, typically for 120 seconds to five minutes. This needs a very steady tripod or else everything will get wobbly. As the rocket moves, the light continues to get recorded bit by bit and then this shot is created!

Flash forward a couple of years to having some better equipment and a few positive experiences of getting this style of shot. The new goal is now getting an interesting foreground in the shot with the streak in the background. I’ve had good attempts of this in places like Lake Eola and I’ve had complete duds like at the Cocoa Beach Pier where my view for a 3AM launch was blocked by clouds.

Trying to Get Permission

In early 2017, I captured a drone picture of the new Orlando City Stadium that I was very proud of. At that point, I conceptualized doing a shot with the stadium and the city skyline in the foreground and a rocket streak in the background. Unfortunately, drones are bad for long exposures. It is difficult enough to keep them still for a normal picture, but for 120 seconds it is impossible. The vantage point from the ground outside of the stadium would be atrocious. This meant that the only way to capture this shot would be with my trusty Panasonic GH5, a tripod, a precarious perch inside the stadium….and permission.

So, the journey to get that permission commenced. I started out by just sending media requests via the Orlando City Soccer website explaining what I wanted to do. I included some example shots of the stadium and a previous rocket streak and simply explained that I wanted to combine these.

Then, before a scheduled launch in November for the mysterious “Zuma” payload that the US government was sending aboard a SpaceX rocket, I decided that perhaps asking my social media network would be a better approach. At the same time, I sent a simple Facebook message to the OCSC page and they gave me an email address to contact. I sent a basic email with my short pitch and an example photo and hoped for the best. 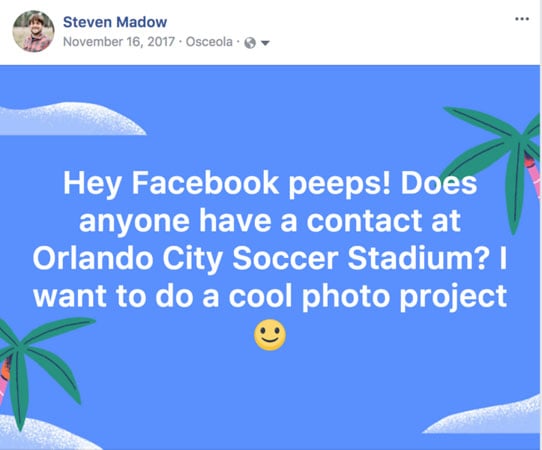 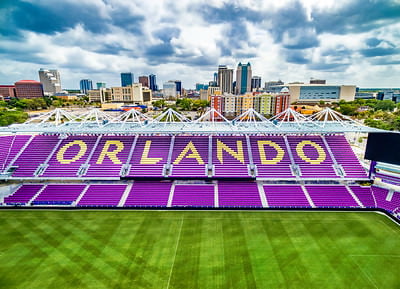 Amazingly enough, I got a response back to the email saying something negative and something very positive. The bad was that the stadium was closed for a somewhat extended Thanksgiving holiday so nothing would be possible. The good was that someone there (I’ll keep their name private) was willing to help. Fortunately (for me anyway) the launch got postponed by a few days, and then for a couple of months. That brings us to last week – the launch was scheduled for Thursday evening. I reached back out to my contact and he was still game.

After charging and packing my gear (three cameras, some tripods, and a few remote camera cables) my wife and I were off to the stadium. We were told simply to beep the car horn loudly when approaching the loading dock. Amazingly this worked, and our gracious host met us and gave a brief tour of the darkened stadium. We then went up an elevator and he opened a locked door to what looked like a utility closet. Inside the room, there was a 30-foot vertical ladder leading straight to the canopy (aka roof) over the stands.

After a scary and somewhat unstable climb, we trekked across the metal grooves of the canopy that happened to be the exact width of our feet. The view from the top was incredible. We could see the Orlando Eye, the city skyline, and much more. The camera set up took about 45 minutes and the rocket countdown continued smoothly. Looking east (towards the Space Coast), it seemed that there were some big clouds in the way, but it was tough to really know if that was the case since it was so dark. During the setup, our guide was able to control the stadium lighting, which was incredibly helpful. He actually turned the lights to full brightness for me to get some shots that I would later blend with the rocket streak. (Puzzled passers-by may have thought there was a late night soccer game!) Since my final shot was 131 seconds, the foreground of the stadium was pretty washed out – some parts were 100% white from the excessive exposure time. This meant that the extra shots taken ahead of time were critical to the success of the final image. 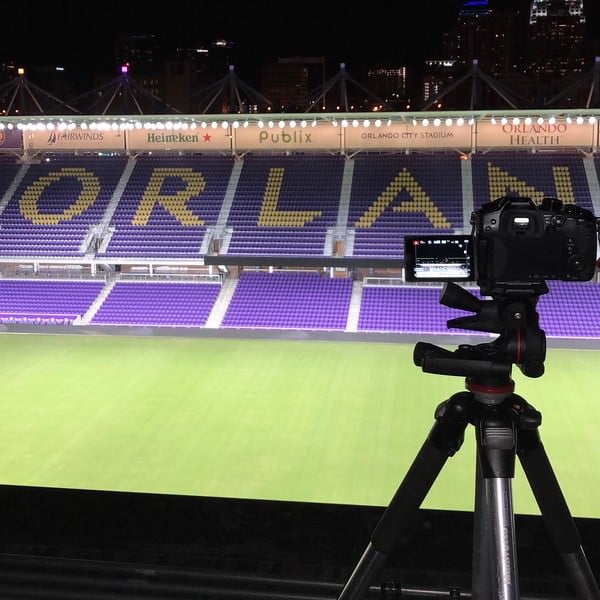 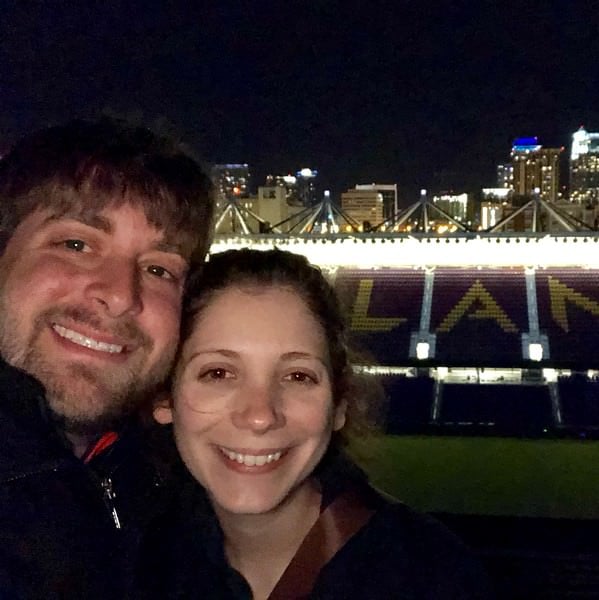 The tripods and cameras were all well-tested and the stadium lights were dimmed. The moment of truth was upon us. Would the clouds be too dense? Would the rocket launch be scrubbed at the last-minute? Would the camera (and backup cameras) fail?

“10,9,8,7,6,5,4,3,2,1, liftoff of the Falcon 9” came roaring out of our phones watching the live stream. The next 30-60 seconds were agonizing waiting for the rocket to rise in the horizon enough to be seen some 60 miles away from the launchpad. And then finally the bottom of the sky began to glow orange and a nice dot of the rocket was clearly visible in the sky. It was rising dead center in the shot, exactly where I needed it to be. The clouds were mostly gone and it was incredibly clear. A few seconds into the view, the Falcon rocket started to head strongly northward, which was perfect for the composition I was seeking.

131 seconds after we first saw it, I decided to stop my shot. The cameras then had to process a noise reduction protocol (I’ll leave the technical details of this part out), but this takes an additional 131 seconds. The camera screens counted down the seconds and we waited, and waited. Finally, the images revealed and they were more than I could have ever hoped for! My primary composition had the rocket perfectly in frame. While it was processing, we could see the second stage begin and later on we saw one of the landing burns from the first stage of the rocket. This was captured as well, and added to an alternate version of the shot shown here.

As we headed back towards the vertigo-inducing ladder, we saw some fireworks from Disney in the distance. It was a perfect ending to an amazing experience, and goes to prove – it never hurts to ask. 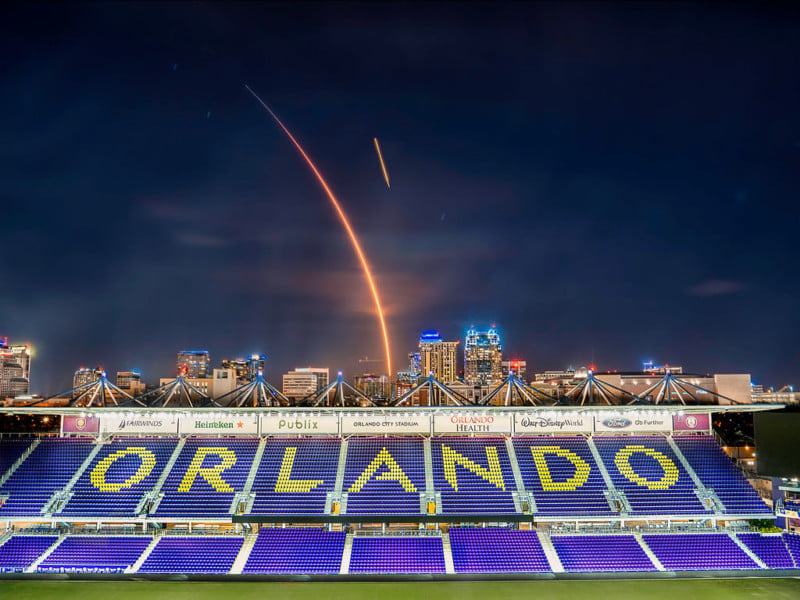 How to Make a DIY Pinhole Lens with a Camera Body Cap: A 1-Minute Guide