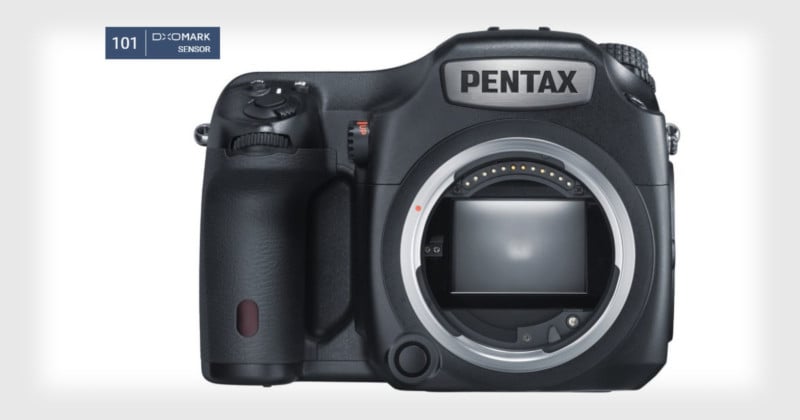 Last month, we reported that DxOMark had reviewed the Pentax 645Z back in 2015 and given it a highest-ever score of 101 before pausing its medium format camera reviews prior to publishing any. That Pentax 645Z review is finally out, and DxOMark still has glowing things to say about the camera.

DxOMark says the 51.4-megapixel camera has extremely good image quality scores, and the large pixels on the sensor gives the camera the best low-light ISO scores ever recorded up to this point among all cameras.

“It’s clear from our testing that the Pentax 645Z’s sensor is extremely capable, coming within a whisper of matching the performance of the Hasselblad X1D sensor (our highest-scoring sensor to date),” DxOMark says. “The 645Z’s high dynamic range and color sensitivity make it ideally suited for capturing the types of scenes that are traditionally favored by medium-format photographers — landscapes, weddings, portraits, and still lifes (commercial).”

The camera is interesting to compare against the Nikon D850, DxOMark says. The Pentax has a sensor that’s 1.7 times larger, but the D850 is about 3 years newer. The Nikon D850 actually stacks up well against the medium format camera thanks to Sony’s sensor manufacturing prowess.

“While the 645Z beats the Nikon sensor in our tests, the Nikon comes closer than you might expect, given the size difference,” DxOMark says. “If Sony made a medium-format sensor with the same design as the D850, it would beat the sensors in both the Pentax 645Z and the Hasselblad X1D-50c.”

If you’d like a medium format camera that has the look and feel of a 35mm DSLR and fantastic image quality, the Pentax 645Z is one option you may want to take a look at these days. It costs just $5,500 new now, which is a significant discount from its original retail price of over $8,500.

Leica Unveils the CL, A Crop Mirrorless Camera with a Classic Design