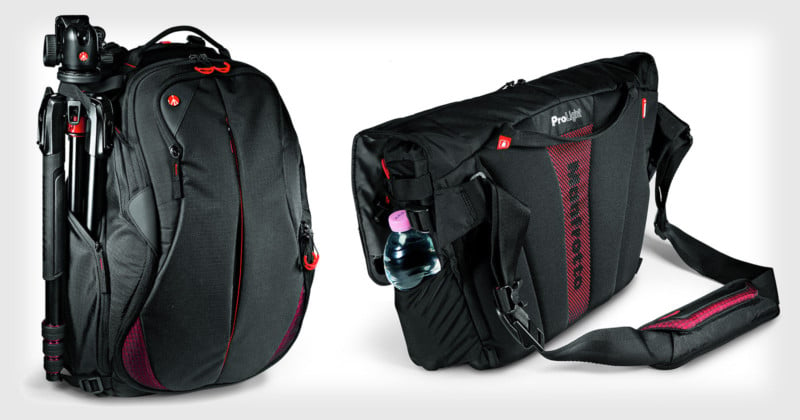 Manfrotto has updated its line of Pro Light Bumblebee camera bags with two backpacks and two messenger bags, which the company says are designed for comfort in harsh outdoor conditions and huge storage capacity.

These two backpacks are designed to take stress and heat off the shoulders, neck, and lower back through the use of a breathable harness system. The system includes a suspended mesh panel for breathability, along with adjustable load lifters, sternum straps, shoulder straps, and waist belt.

Both bags have dual side pockets, top and side strap handles, external tripod connections, interchangeable internal dividers, and fold-out rain/UV protectors. The main compartment can optionally be split in to a top and lower compartment to separate gear.

Like the backpacks, the messenger bags also have a breathable harness system for comfort. The length of the straps on the bags can be quickly controlled with a buckle.

The messengers have a built-in Velcro silencer on the main access flap, to minimise noise when shooting in quiet environments. They can hold a handheld gimbal safely with an elastic strap, and a small tripod with two bungee cord straps under the main flap.

A fold-out rain/UV protector is included with both bags, as well as the same interchangeable dividers featured in the backpacks.

My Worst Nightmare Came True: I S**t My Pants on a Photo Shoot