This incredibly creative ad from Gatorade uses a “liquid printer” and precision-timed strobe photography to create a stop-motion athlete from drops of water. What’s more, it was created entirely in-camera, according to the company.

The video starts off with a human figure being pumped out of a water printer. Okay, that’s pretty cool, but water printers are nothing new. But then the figure jogs over to a box and starts doing box jumps, with water splashing as its feet hit the box.

The figure stands and starts kicking a punching bag, which recoils with each strike. The ad would be pretty impressive on its own, but Gatorade says that the entire thing was created in-camera.

The water printer itself comprises over 20,000 parts, and took over 5,000 man hours to construct. The printer they built had 2,048 individual nozzles, which turned on and off within 2 milliseconds. The strobes were then set to freeze the droplets mid-air. James Medcraft, the project’s director of photography explains:

We’re using the flash to freeze the water droplets at a very precise moment in space, and we’re having to do that with millimetre and microsecond accuracy.

To create the motion, the nozzles were driven by motion capture data of a real athlete who ran, jumped, and kicked while wearing sensors. The water rig would then drop a frame-by-frame animation, which was frozen with each flash. 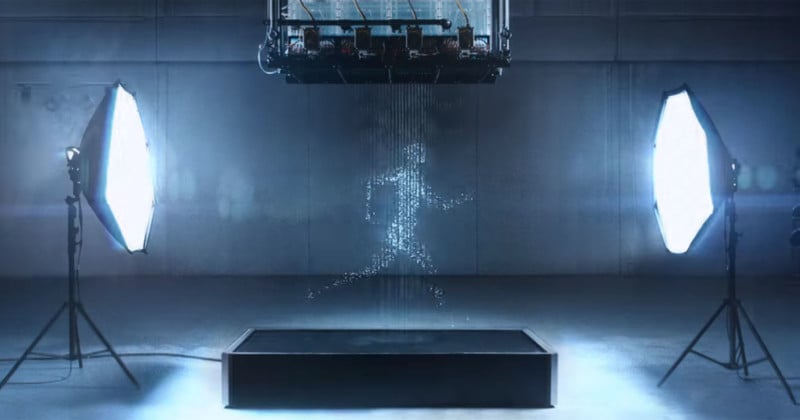 The result is the very impressive ad, that you can watch in full at the top. The one thing we can’t figure out – how did they create the punching bag scene without CGI?

Gatorade has shared a behind the scenes video, which you can watch below. How do you think they did it?

(via Gatorade via Fstoppers)

This is What a Bad Reviews Extortion Scam Looks Like

GoPro on Weather Balloon Captures an Airliner Flyby at 38,000 Feet