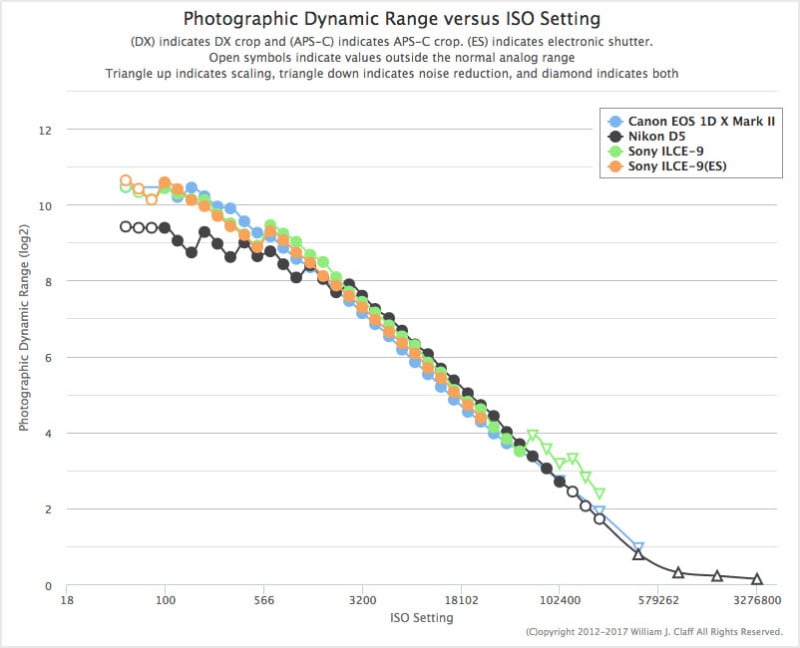 Photons to Photos has updated its Photographic Dynamic Range versus ISO Setting test database with results from the new Sony a9, and it found that the a9 holds its own against the flagship Nikon D5 and Canon 1D X Mark II DSLRs.

The Sony a9 “performs very well against its competitors up till 3200 ISO, where the Nikon D5 just edges it out,” writes Sony Addict. “The Sony a9 beats the Canon 1D X Mark II across the board, but falls just behind the Nikon D5 in low light, while besting it in maximum dynamic range.”

Here’s a chart with the test result numbers:

The test results also show that shooting with the electronic shutter of the a9 doesn’t result in very much dynamic range loss at all compared to using the mechanical shutter.

When tested against the Sony a7 II and a7R II, the Sony a9 didn’t fare as well. The a9 fell short against both of those cameras in dynamic range, but it outperformed the a7 II in low light situations.

You can pit the a9 against other cameras (or any camera combinations) yourself in the interactive Photons to Photos test chart.

This Photographer Captures Chicago’s Skyline as an ‘Urban Quilt’