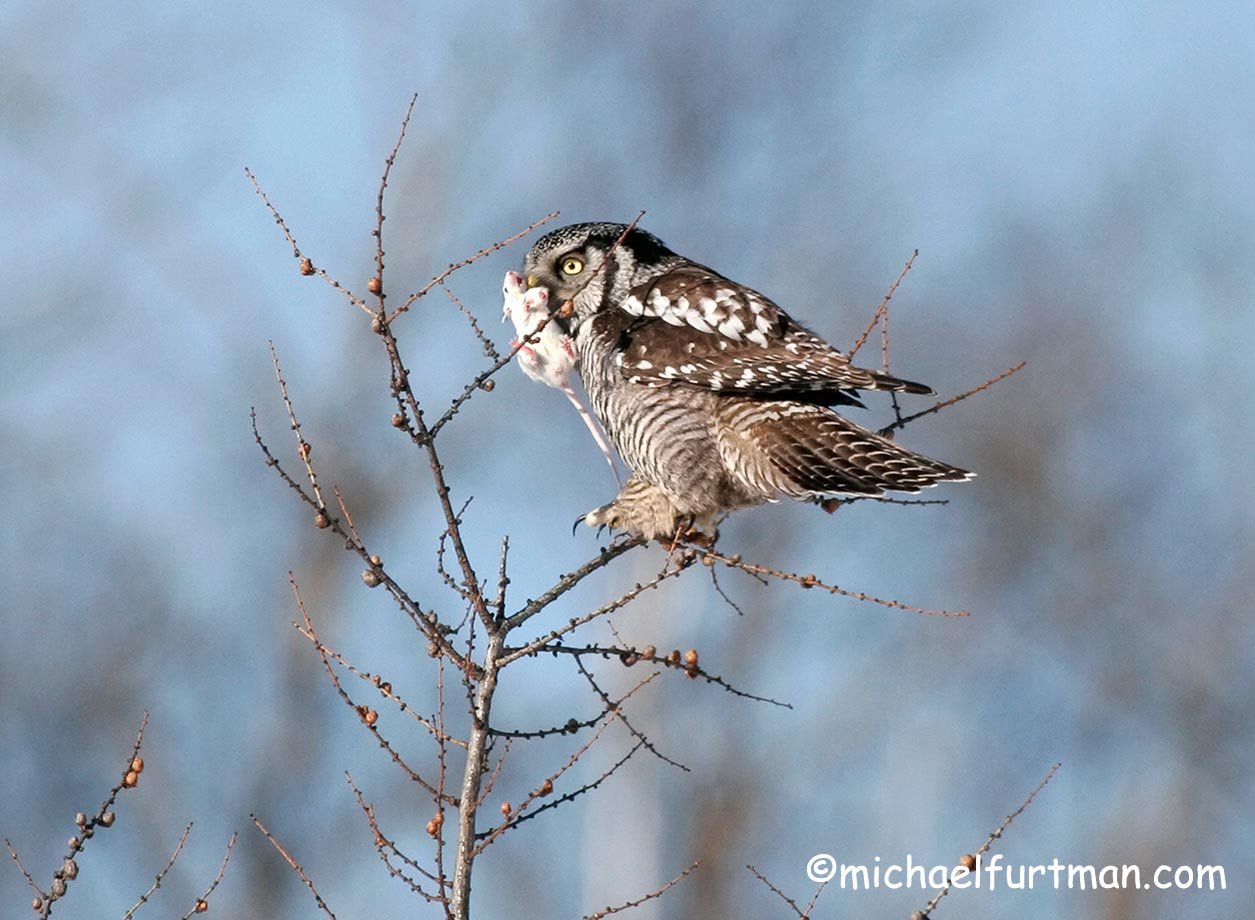 Veteran wildlife photographer Michael Furtman has seen many images of northern owls swooping down, talons drawn on an unsuspecting black or white mouse on the surface of the snow. This kind of imagery makes his blood boil.

This is because he knows, without a doubt, that the mouse in question was procured by the “wildlife photographer” from a pet store to bait the owl. You see, the only mice that are native to the snow are brown ones.

Native brown mice burrow under the snow where it is warmer, and seldom come out on the surface where there are predators waiting for them.

The northern owl (migrating a little southwards from northern US or Canada) glides over the snow with its flat face funneling the sounds its prey makes beneath the snow like a dish antenna straight to its sensitive ears. When it locates the native rodent (mouse or vole) under the snow, it dives face first to place the sounds to a precise location and then, at the last moment, it will pivot to reach its long legs into the snow and dig out the mouse.

In short: the capture happens mostly under the snow and not on the surface as seen in many of the photos.

“Baiting is a practice in which a photographer uses either a live mouse or a toy mouse manipulated with a fishing rod to entice an owl to attack and then capture a photo of the action,” Furtman, who is a full time wildlife photographer living in Minnesota, told me over the phone. “It’s become more and more widespread in recent years. These relatively rare birds, we’re talking about Northern Owls (Great Gray, Snowy, Northern Hawk Owl), not so much the resident owls that we have here that are primarily nocturnal; but these winter migrating owls will hunt in the daytime frequently, which makes them an attractive photo subject.”

“These photographers will locate the birds usually through social media,” he continued. “Once these relatively rare owls are spotted by birders or other photographers, their locations are posted online, and quite literally within hours, they will be surrounded by photographers, some of whom are baiters.”

The owls positively cannot refuse a mouse that is offered to them. Unlike backyard birds, which will scatter when you approach the feeders, these northern owls will approach. They will take the mouse from a tripod or even your hat, and this “helps” the photographer to get a better diving photo with its talons outstretched.

Baiters will make the bird go from perch to perch for hours with the intention of getting different backgrounds. They will keep on feeding mice to get more and more photos, till the birds are stuffed to the gills. This, despite the fact that Audubon recommends you, “never lure hawks or owls with live bait, or with decoys such as artificial or dead mice,” since, “baiting can change the behavior of these predatory birds in ways that are harmful for them.”

In the film days, wildlife photography was practiced only by the pros or advanced amateurs, as pro gear, including long telephoto lenses, was expensive. Today, as gear gets more affordable and online tips and techniques and wildlife workshops are increasing in popularity, there has been a major surge in wildlife photography.

“The popularity of wildlife photography has exploded in the past decade with the advent of high speed, digital technology. That’s helped spark intense competition, said Keith Crowley, a professional wildlife photographer based in Hudson, Wis.” reports Minnesota Public Radio. “Several magazines and photo contests have begun to reject baited photographs of owls and other predators. Many photographers now label their shots with the hashtag #ethicalowlphoto.” You can understand, then, why this cover of the Feb/Mar 2015 National Wildlife, a magazine published by the 80-year-old National Wildlife Federation, created some controversy. Editor Lisa Moore went so far as to write an open letter in a later edition to address the issue:

Last year we ran a cover of a snowy owl with open talons. An astute reader wrote to ask if the owl had been baited. We didn’t know, so we investigated and learned that, yes, it had been baited with live mice, a practice we find unethical. We have since changed our photography guidelines, rejecting such baited images of raptors and other predators … and adding new rules about disclosure so we can make informed judgments about photo selection and captioning.

If photographers get too close to wildlife, cause stress, … or pass off captive shots as ‘wild’, they cross an ethical line. Such images also can create distrust in readers. You expect and deserve photographs that are ethically obtained and honestly labeled—and that’s what we’ll strive to bring you.

There are several serious problems with baiting owls:

1. These pet shop mice pose a risk to the bird, as they frequently carry salmonella bacteria, pathogens, or parasites.

2. Another risk is that these birds then almost instantly associate people with food. This leads to the birds approaching cars as soon they pull off on the shoulder of roads, and that is when they get hit by passing vehicles. Also, when they return home, they start visiting humans because they’ve learned to beg for food.

3. You are getting a fictionalized photo as this owl never hunts in this particular way… in other words: the deceit is obvious to the trained eye.

Currently owl baiting is legal in most regions of the US and Canada outside a National Park or Wildlife Preserve, which leads to some unfortunate practices.

Expensive owl photography workshops in particular often use the technique since the owls have to “perform” on the fixed days of the workshop at times when the lighting is right. This, in turn, teaches the workshop participants this harmful technique, which they then go out and practice on their own.

Furtman, of course, seriously objects to the practice, but he says there’s virtually nothing he can do. When he has called out these workshops, he has been threatened by lawsuits.

This Video Explains All 27 Photoshop Blending Modes in Detail

The NPF Rule: A Formula for Sharp Star Photos Every Time