Not even Leica is sure what the Leicina VC is. Is it a directors viewfinder? A call back to the Leicina Super 8 cameras of old? A gimbal? The answer seems to be (D) All of the above… sort of.

Photokina is a great place to debut a strange or crazy concept—look no further than the viral Laowa 24mm f/14 2x Macro Lens, or Hasselblad’s sexy V-Series concept. But Leica probably should have fleshed this concept out a touch more before presenting it to the press.

NewsShooter got a chance to talk to Leica about the Leicina VC, and from what we can understand, the primary function of the device is to be an advanced director’s viewfinder. Take a gimbal, slap a Leica lens on the front, an SL-series electronic viewfinder on the back, a sensor in the middle, and a smartphone on top, and you can use this combo as a way to frame and test your shots on-location.

As such, it may indeed be best described as an “an assistant tool” with a “sensor type of thing,” as the rep so eloquently put it. 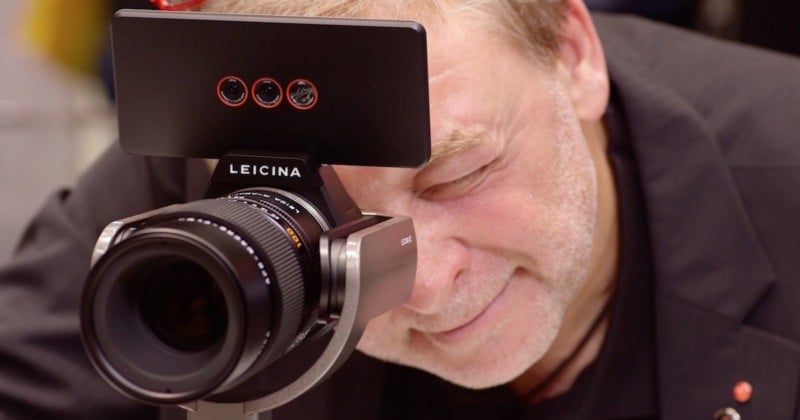 The Leica rep was keen to point out that this isn’t a camera, although it can be. In fact, he didn’t seem to know exactly what it was, and that’s why Leica decided to bring it to Photokina.

The feedback they get from people looking at the odd Leicina VC will help the German camera giant determine if they should produce something like this and how they could make it more popular with consumers if they do.

For our money, an “accessory device” like this feels too niche, too superfluous, too … something to ever really take off. But who knows. Maybe in a few odd years we’ll be eating our words and praising the rebirth of the Leica Leicina.

A Few Words of Wisdom from Iconic Photographer Elliott Erwitt