So, time to stock up on bottled water and canned goods — the apocalypse is upon us. The iPhone 7 is here, and with its new and improved high res, dual lens, RAW shooting imaging system, it’s going to kill the consumer/enthusiast camera industry.

No less erudite a periodical than The New Yorker is predicting it, backed up by no less an authority than Chase Jarvis, the face that launched a thousand Instagram accounts. Whether he knew it or not, Chase lent his oft-quoted nugget of wisdom to the piece, “the best camera is the one you have with you…” I hope he gets a nickel every time somebody uses that line.

There’s little doubt that this new iPhone will be a game changer, as long as it doesn’t set its users’ shorts on fire. It’s becoming very clear that from this point forward, the joy of photography for almost everyone will be defined more by touching and swiping and less by pointing and shooting.

Just not by me. I’m drawing a line in the silica. It’s finally time to push the furniture up against the door.

For some people, and not just the luddites out there, technology takes all the fun out of everything. I’m betting that most of you reading this aren’t among them, although, like me, you may be skeptical. Those of us who cast out into the stream of technology without necessarily taking the bait hook, line and sinker are known to technophiles as edge cases. I’m a classic edge case, but I’ve gotten about as close to the edge as I care to.

I already use my phone to turn the lights on and off in my house, to adjust the heat and air conditioning (even when I’m not home), to listen to music and to watch TV, to try to figure out why I’m not where I thought I was, and to claim the long lost fortune left to me by some distant relative living in Nigeria.

What I don’t use it for all that much is to make phone calls, since everybody stopped talking to me once I started writing these grumpy articles for PetaPixel.

If Chase Jarvis and The New Yorker is to be believed, I’d better start getting used to using it for the one thing that has consistently brought meaning, challenge, enjoyment, and employment to my life. Ever since the day I borrowed my mom’s 126 Instamatic and a few packs of film (and, like an idiot, flashcubes) to take pictures of my boyhood idol, tennis legend Rod Laver, photography and I have been on a first name basis.

You can probably imagine how those flashcubes went over at an indoor tournament, but I didn’t have to. Laver promptly fired a ball at me as some guy with a walkie talkie hustled me away from the court. And of course, the pictures sucked.

But after a year or two of teaching myself how to do things better, I went back to the same tournament with my shiny new Nikkormat and a 200mm Quantaray lens. While my new pictures still sucked, my more appropriate equipment and growing knowledge helped them suck a little bit less. That same year, Laver’s long, remarkable career came to a close as players half his age using more advanced rackets, tactics and fitness regimens quickly moved in and grew the game.

Yes, that was a metaphor. Get over it.

With photography, we’ve been through this so many times before, haven’t we? Ever since Niepce’s science project with asphalt and iodine nearly 200 year ago, subsequent tools and methods attempted to make  “the art of fixing a shadow” easier, more accessible and, yes, better.

Think about the march of progress in the medium’s short analog era- the Daguerreotype, the ambrotype, the tintype, the Autochrome, nitrate film, fire extinguishers, safety film, Polaroid, Kodacolor, the Advanced Photo System…okay, maybe not that one. Each welcome technological innovation improved, replaced or expanded on what came before it, even if a few holdouts griped.

This is what the tech term creative destruction refers to — the untidy end of one thing because something better comes along. We can trace the concept back to the industrial revolution of the mid-nineteenth century, when many agrarian economies rapidly converted to manufacturing.

Or back even further, to Johannes Gutenberg, who, in the fifteenth century, put a whole generation of monks with neat handwriting out of business with the invention of movable type and the printing press. While certainly refined quite a bit, Gutenberg’s concept of mechanized printing would remain basically unchanged for over 500 years.

Basically unchanged, that is, until the the 1970’s, when electronic word processors, photo-typesetting and, eventually, minicomputers running desktop publishing and design applications came on the scene. For most people, these powerful innovations made the written word easier to compose, reproduce and share. A few pushed back by fetishizing things like “legendary” Moleskine notebooks and old typewriters, and by dismissing any attempt at literature written on a computer.

But for anyone working in the printing, publishing, newspaper and graphic design industries, it was one of those existential “grow or die” moments we hear so much about these days, and one that photographers would soon have to reckon with themselves.

To hear some describe it, you would think that digital photography sprung snarling from the loins of the mother of all killjoys. Somebody called “bullsh*t”, and for the first time, technological progress in picture making suddenly became a dirty word. It happened while the rest of us were striking up the band and selling off our darkrooms.

It created its own cast of contrarians, the film fetishist, who blow raspberries at the likes of photographer and author Kirk Tuck for exquisite lines like  “making the process harder for the sake of artisanal martyrdom doesn’t move the art along its way.” Kirk can write.

But this is where my neat little history lesson circles back and bites me on the hiney.

Isn’t that the point of smartphone photography — to make what was once a very complicated  process nearly effortless? To put the emphasis where it should be — on the picture, not the way the picture is made? Following Kirk’s line of thinking, aren’t we all just a bunch of artisanal martyrs every time we head out with a heavy camera bag (or stay in with Lightroom and Photoshop), when a phone and a few apps might do the job as well or better with a lot less fuss? Don’t we all run the risk of turning into, pardon the shameless backlink here, just a bunch of hypocritical old poops?

I’m so conflicted- I’ve always resisted using a phone to make “serious” pictures. At first, it was a rational choice- early mobile phone cameras felt more like gimmicks than useful tools. But now that they are extremely useful tools, I’ve become irrational. Call me crazy, but the prospect of replacing my cameras with a phone is kind of depressing. It’s like everything I’ve spent my life learning, doing and teaching would go right out the window, and I’m back to using something like an idiot-proof Instamatc and flashcubes. I was there too, with my Fuji X100T way up in the cheap seats, which aren’t all that cheap, by the way. All I got with my very good camera was a bunch of tack sharp pictures of the two knuckleheads in front of me. I should’ve just used my phone, right? Isn’t there an app for that?

BUT… check out that nice creamy bokeh on Rafa Nadal down there on the court. Show me a phone that can do… say what? The iPhone 7 does bokeh, too? I give up.

Like I said, I’m a conflicted, irrational hypocrite, one who the Universe apparently gets a kick out of routinely tapping on the shoulder. Without a phone, I wouldn’t have this nifty picture of Jenny and me with my aforementioned boyhood hero, Rod Laver. The guy at the US Open bookstore only gave us about 10 seconds to get the shot, and it would have taken way longer than that to show him which end of the Fuji to point at us. 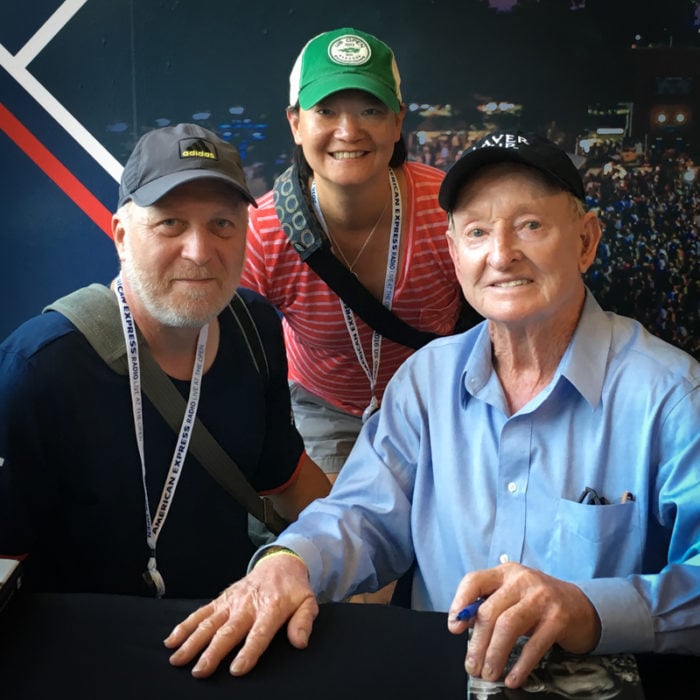 I don’t mean to end this on a downer, but the generation of photographers to which I belong only has a few more decades of relevance and coherent work left in us. I heard through the grapevine that after the recent grand opening reception for the new Leica boutique in Boston, someone quipped that it looked like the “old guys’ table at Dunkin’ Donuts.” Exactly.

I can’t say I blame anyone in the younger generation for growing tired of listening to us fetishize our cameras, our processes, our heroes and icons, our experience and our opinions. Frankly, I’m getting a little tired of it all, too. It’s inevitable that by the time those of us in the Pepsi Generation start dribbling in our soup, something like the iPhone 7, or its competitors and successors, will be how future generations “move the art along its way”.

Please just raise a toast to us when some brilliant new, creatively destructive technology comes along to make even smartphone cameras, and everything you learned how to do with them, obsolete.

In the meantime, Apple will have to pry my real cameras from my cold dead hands.

The views expressed in this article are solely those of the author.

Nikon Unveils Its ‘KeyMission’ Action Cameras, Including a 4K 360° Camera