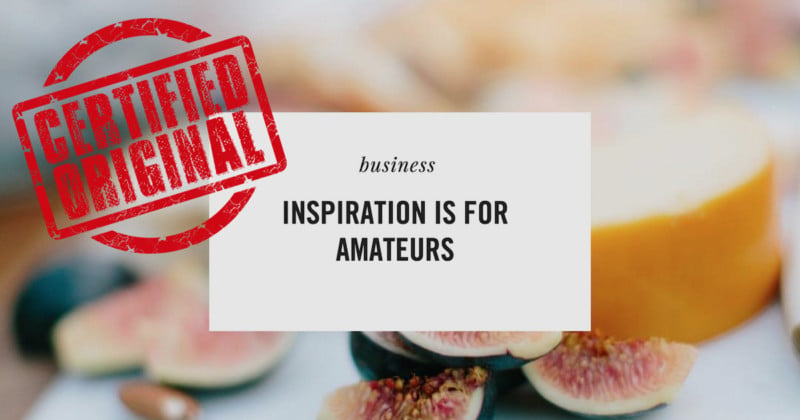 Wedding photographer Jasmine Star is probably still recovering from the first slew of plagiarism accusations leveled against her in 2013; however, it seems the saga is entering Episode II. The folks at Stop Stealing Photos are accusing Jasmine of another transgression.

The story today is unfortunately similar to the one posted three years ago. Back then, the accusations against Star—which she posted a public apology about—surrounded blog posts and inspirational quotes that were lifted without credit; this time the alleged plagiarism was found in an “Inspiration is for Amateurs” blog post that bears some striking similarities to a quote from Chuck Close.

Here’s a PDF created by Stop Stealing Photos that puts the two side-by-side, highlighting the phrase that appear in both: 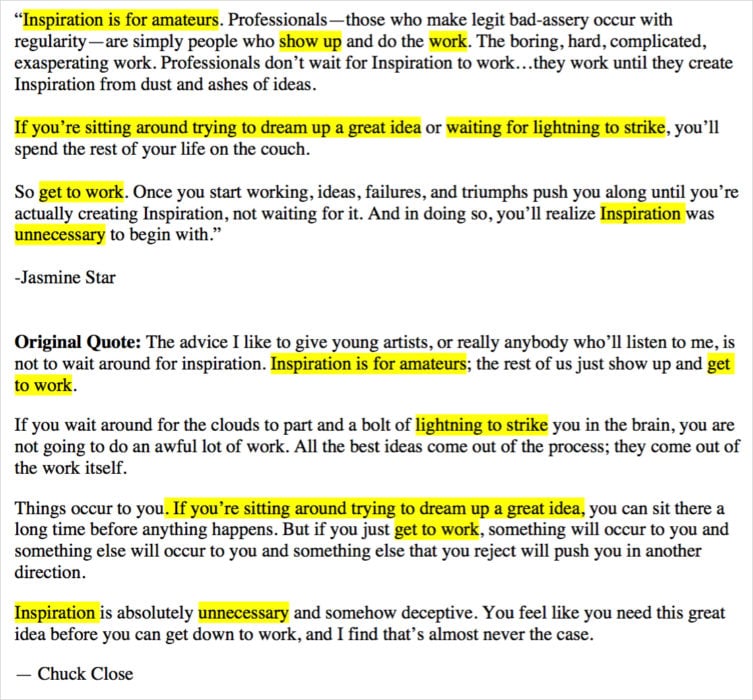 Unlike last time when the evidence was damming and the response swift and ruthless from the photo community, Star is finding that some people are actually on her side this time around.

“To play devil’s advocate for a minute that’s hardly damning. Phrases like ‘show up and do the work’, ‘don’t wait for lightning to strike’, and ‘inspiration is for amateurs’ are hardly unique,” writes one Redditor.

“Guys this is a hair on the witch hunt side no? If she blatantly copy and pasted it with no credit tag sure but I mean shit some of these quotes people are grabbing I’ve heard millions of times,” asks another.

Of course, others have been significantly harsher, but even those in the middle ground make a good point: given Star’s history with plagiarism, it probably behooves her to be overly cautious than others, attributing inspiration as well as direct quotes.

We’ve reached out to Ms. Star for comment, and she has replied with the following statement, which we are reprinting in full:

Many thanks to the kind people who pointed out that this post strikes similarities to a Chuck Close quote. I am—and remain—totally inspired by who he is. I read his words and it stirred the desire to write my thoughts on Inspiration.

My apologies for not attributing inspirational credit to him, but you can find his full quote where I first discovered it HERE.

The similarities in words in like “do the work” and “waiting for lightening to strike” and “inspiration is for amateurs” were never intended to take credit for his words, but, rather, a distinct reflection of the verbiage I use with regularity, which blurred the lines of attributing credit. And this was a mistake. To those I’ve offended, I apologize. To those who’ve extended support and grace, thank you.

Should We Care Who Took This Photo?