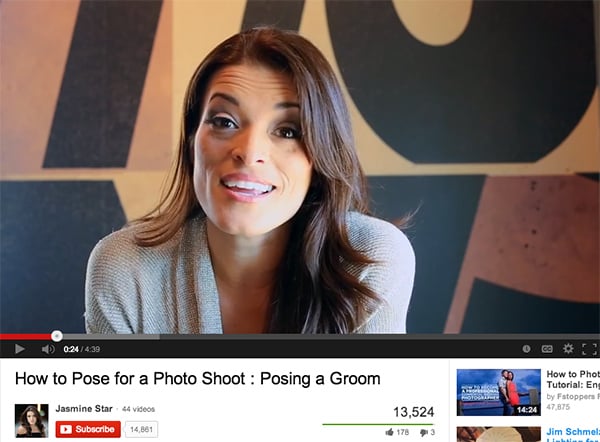 There are few photo conferences where the enthusiasm is palpable – where everyone from the doe-eyed to the veteran clamors for pearls of wisdom from an accomplished speaker roster. That’s the reality at WPPI where 13,000 wedding and portrait photographers descend upon Las Vegas in the early Spring. Unlike the run-of-the-mill photo conference, this one is filled with people looking to be inspired, and ready to carve a path in the business of photography. It is the conference of optimists and exuberance. I thoroughly enjoy it.

Jasmine Star was one of those names that would fill rooms with hundred, if not thousands of people. People counted on her anecdotes and words of wisdom to inspire their own photography. She is a rockstar in the wedding photography market – an internet famous, master marketer with good looks and an authentic demeanor that seemed perfectly suited for her audience.

But over the past few weeks, her integrity and authenticity have come into question as allegations of plagiarism in her writing and tweeting have surfaced in some pretty unambiguous ways. These revelations come on the heels of similar findings in the writings of Doug Gordon, another workshop rockstar.

With the amount of content that the two produce, it’s almost inevitable that something they say will sound similar to someone else. We all read the same blogs and industry websites, and this exposure undoubtedly affects the ideation of our thoughts and opinions over time. A few similar thoughts might be coincidental. But a slew of nearly verbatim posts is inexplicable, and it forces us to question everything. Did they really write that inspiring quote? How did they get so funny? Did Doug Gordon really license a Jason Mraz song for his website?

As the din of the allegations have grown louder, a group calling themselves “Photographers with Ethics” has started an online petition to drop both speakers from the 2014 WPPI conference. Conference director Jason Groupp has, to his credit, publicly stated that they are looking very closely at the matter and listening to all the feedback they are getting from their audience.

Power and fame are addictive. Seeing a torrent of “Likes” the moment you post an Instagram feels validating. Reading hundreds or thousands of retweets of every word you utter is like crack. And SEO algorithms actually reward content creators who yield this type of response on social media. So I can understand how it happens. I certainly don’t condone, nor do I justify the behavior, but I get it.

I also get that these photographers employ staff who ghostwrite pieces on their behalf, and perhaps there is a very logical explanation about an intern who swiped a blog entry or a tweet because their boss told them to create some content.

But when two top educators in the wedding photography field are caught in a web of plagiarism, there is an institutional problem that must be addressed. Doug apparently had a half-assed apology in July on his Facebook page that has since disappeared, and Jasmine hasn’t issued any statement whatsoever. Their behavior reflects poorly on every other photographer who is trying to carve a niche through education [disclosure: I served on a panel at WPPI 2013]. And it sucks all the good will out of the conference hall.

So let me join the chorus of critics calling for their dismissal from WPPI. No explanation or apology this late in the game will be good enough. WPPI has the power to take away Jasmine and Doug’s biggest platform while taking a stand for credibility and intellectual property. It’s the right thing to do, and the right thing for the business.