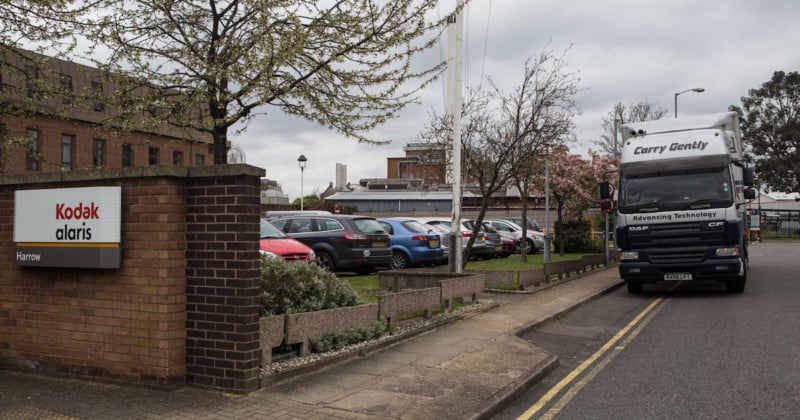 Kodak Alaris, the spin-off of Eastman Kodak that produces the photographic film products the Kodak name is known for, may be in trouble. The company plans to shut down one of its five major manufacturing facilities by the end of this year.

Born out of the Kodak bankruptcy, Kodak Alaris was created in 2013 to “keep the Kodak legacy alive.” But according to getwestlondon, the company is already in trouble.

Alaris is moving to shutter one of only 5 major manufacturing plants listed on the Kodak Alaris website. Apparently the plant, which is located in Harrow UK, is being shut down due to a “drop in demand coming into the factory over the last 18 months,” and will affect about 250 of the 3,000 people Alaris employs worldwide.

In an optimistic report from December of 2013, then head of the company Lee Palmer told the Harrow Times that the Harrow plant was “vital to the future of the company” because “all the global manufacture of all colour negative paper is done in Harrow.”

We’re not sure if the word “vital” still applies, but this move can’t bode well for the young company. “The site is unfortunately unable to develop a viable business plan for the future going forward,” explained head of Kodak Alaris operations Brian McGowan.

The full impact of this closure on Kodak’s remaining product line is still unknown—it doesn’t seem that any of Kodak’s photographic film is produced in Harrow—but we’ll be keeping an eye on the situation and updating you as more news breaks.

UPDATE: After publishing this piece, Audrey Jonckheer, Director of Worldwide Public Relations for Kodak Alaris’ Imaging Division, reached out to us to clarify a few things and answer some of the questions the news had brought up.

Here is her statement, pasted in full with her permission:

Across the board, the color negative paper has undergone industry declines. This market decline has led to a partially-filled manufacturing factory and intense productivity pressures.

In response to these pressures, we’ve proposed that we would source a majority of our CNP from Carestream Health in the U.S. (subject to U.K. union consultation). As a result, we would cease manufacturing operations in our Harrow, UK factory, which sensitizes and converts CNP and finishes Thermal Media. This proposed action would likely result in closure of the site. This is not a reflection on Harrow employees who have worked tirelessly to meet our customers’ needs. The team has worked quite hard to align capacity and costs with lower CNP volumes over the past several years. We will still actively participate in the CNP market – but will do so with a different supply chain.

Some background on Carestream: The people and facilities of Carestream Health have a long history of producing the Kodak-branded CNP products for us and we have the utmost confidence in their ability to maintain the same high manufacturing quality. The proposed transition of the CNP manufacturing to Carestream Health would be planned for the 4th quarter of this year. Through other Kodak Alaris facilities, we will continue to produce Thermal media.

I know one of the questions you asked in your article was about any impact on film – it does not. We continue to provide professional and amateur photographers with ongoing supplies of still film and Photo Chemicals.

We continue to establish our position as an independent company. We’ve seen growth within our primary businesses, as well as opportunities to expand beyond our core portfolio. As part establishing ourselves, we recognised the need to propose this action at the appropriate time to place both our CNP business and the overall company in a stronger, more sustainable financial position. And like I mentioned earlier (but definitely bears repeating), the efforts of our team at Harrow enabled us to go as long as we have before proposing the closure of the Harrow facility.

Once you’ve read through this, hopefully it puts the proposed action in a bit better context.

Update on 4/23/16: Here’s a statement from a Kodak spokesperson:

Plans we announced today are to ensure the ongoing availability of color negative paper (CNP). We communicated that, due to worldwide industry market declines for CNP, we propose that we outsource the manufacture of CNP to Carestream Health in Windsor, Colorado in Q4 2016. With this action, it’s proposed that manufacturing in our Harrow facility ceases, which would result in closure of the facility. Also, this does not affect our supply of still film to the market. Manufacturing of film is done in Rochester, NY.

The Ugly Side of Wildlife Photography