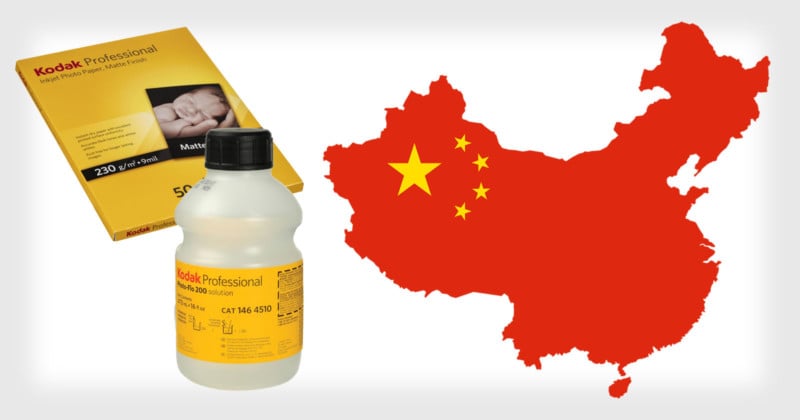 The Kodak paper and photochemical business is reportedly being sold to a Chinese company.

Inside Imaging reports that an announcement of the proposed sale to Sino Promise Holdings was made internally on July 7th by Kodak Alaris, the British company that shares ownership of the Kodak brand name with the US-based Eastman Kodak Company.

After Kodak’s bankruptcy in 2012, a $2.8 billion claim by the UK Kodak Pension Plan (KPP) was resolved by the formation of Kodak Alaris, which acquired Kodak’s personalized imaging and document imaging businesses.

Established in Hong Kong in 1993, Sino Promise now bills itself as “the largest distributor of Kodak Alaris in the world.” The company has manufactured Kodak brand paper and chemistry in its factories in China over the past several years.

According to Inside Imaging, the paper and chemistry business makes up about 56% of Kodak Alaris’ Paper, Photochemicals and Film (PPF) business while film contributes 36%. That film segment, not included in this sale, will reportedly be transferred to the Kodak Moments unit, which handles things like online photo services, kiosks, and more.

Sino Promise and Kodak Alaris had been in talks to strike a deal on a much larger chunk of Kodak Alaris’ business, but that fell through prior to this smaller deal being reached, Inside Imaging reports.

Oh, and Eastman Kodak was also reportedly interested in buying back the paper and chemistry business from Kodak Alaris, but it was apparently in no position to bid against the likes of Sino Promise.

Does Micro Four Thirds Have a Future in Photography?

My (Reluctant) Love Affair with My Smartphone Camera