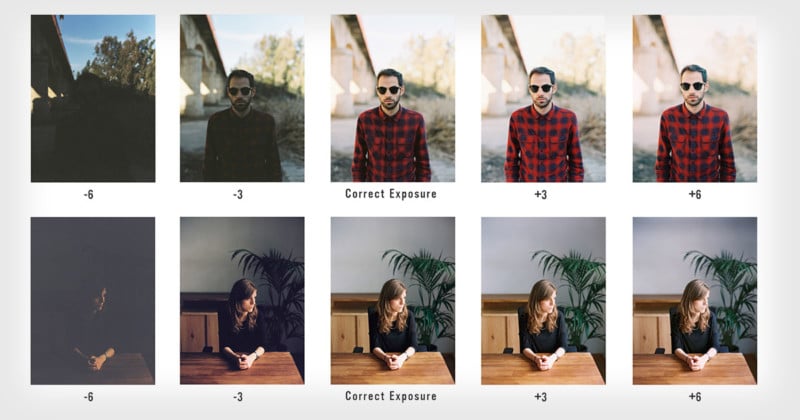 One of the things about film photography is that exposure on film, unlike in digital photography, is not equivalent at all to overall brightness of an image.

For example, in the digital photography world when someone speaks of an overexposed image, you instantly imagine a bright, all-white image with (probably) clipped highlights. In the film world this is not necessarily so.

Color film’s latitude is huge… like 2 to 3 stops for underexposure and up to 6 stops for over-exposure (depending on the film stock). Also, clipped highlights are literally impossible on film (straight from the scanner). What’s more, brightness can be controlled during the scanning process.

So then what’s the big deal with all that “overexposed 1 stop” film talk you read everywhere on the Internet?

To answer these questions, we decided to shoot some stuff and show you guys how this thing works. Here is a shot of our colleague Héctor we shot on Fuji 400H film and a Contax 645 medium format camera. 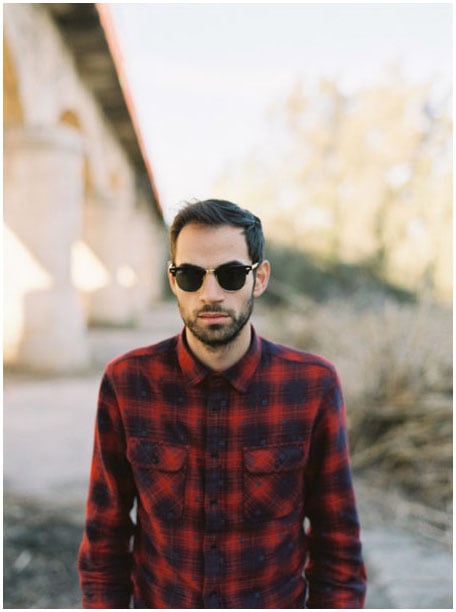 We metered with our handheld (incident) light meter below his chin with the bulb out facing the shooter. That shot will be considered our “anchor” or “box speed” example, meaning it was shot at 400 ISO not over or under-exposing.

Here’s the full spectrum of the 13 stops of the test: 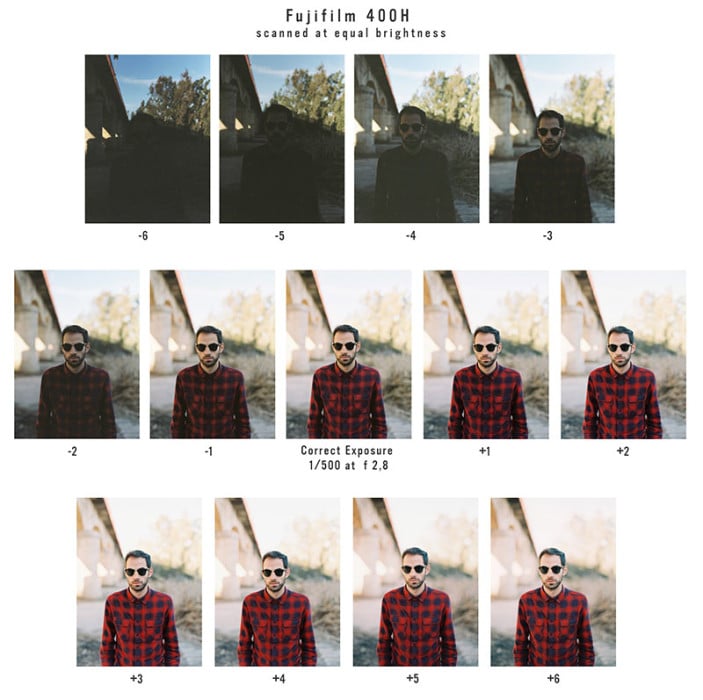 Now zooming in on the overexposure side: 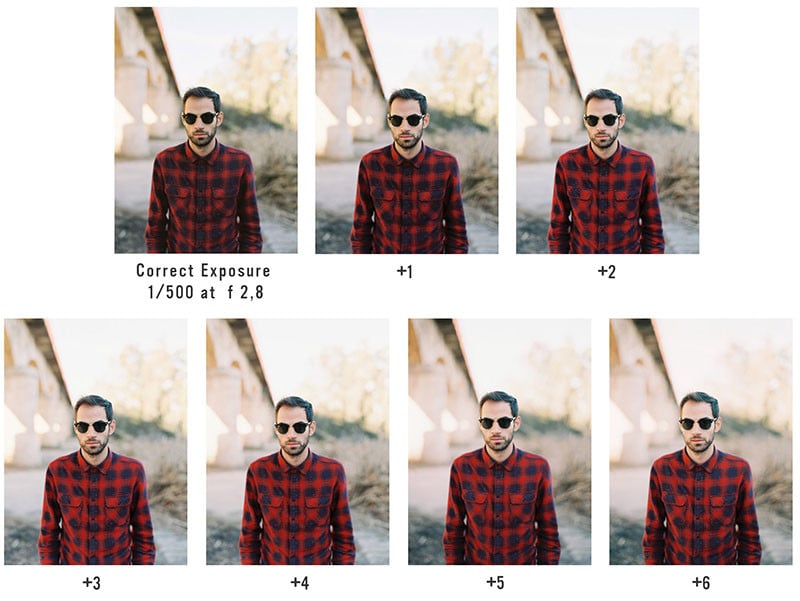 And finally the underexposure side of the test: 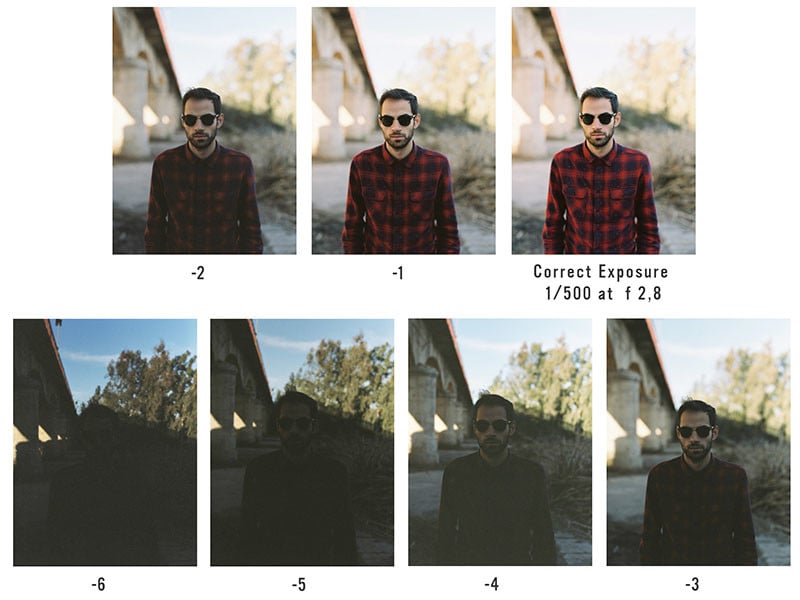 We did the same thing for these shots of our colleague Gloria, but this time in a totally different light situation and on Kodak Portra 400 film. The properly exposed shot: 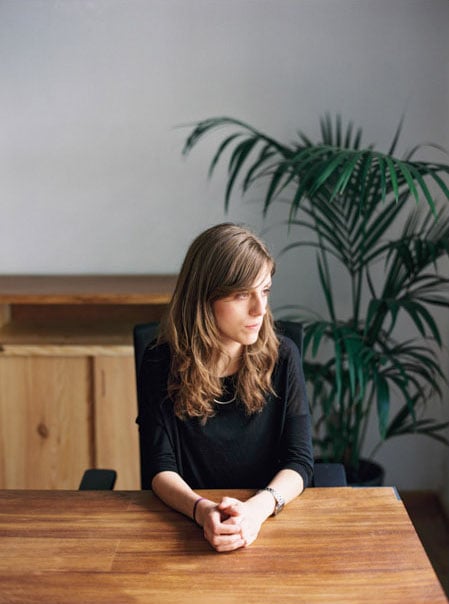 The full spectrum of 13 stops: 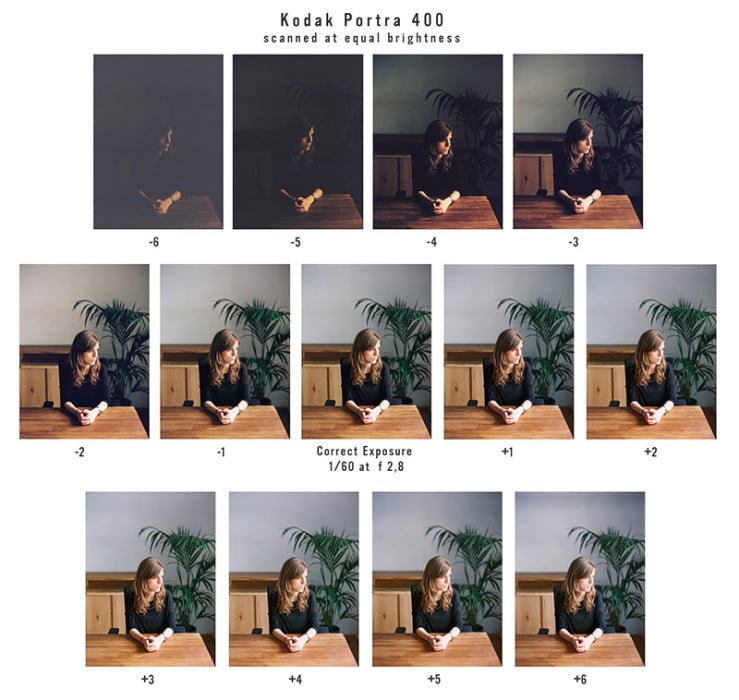 Zooming in on the overexposure side: 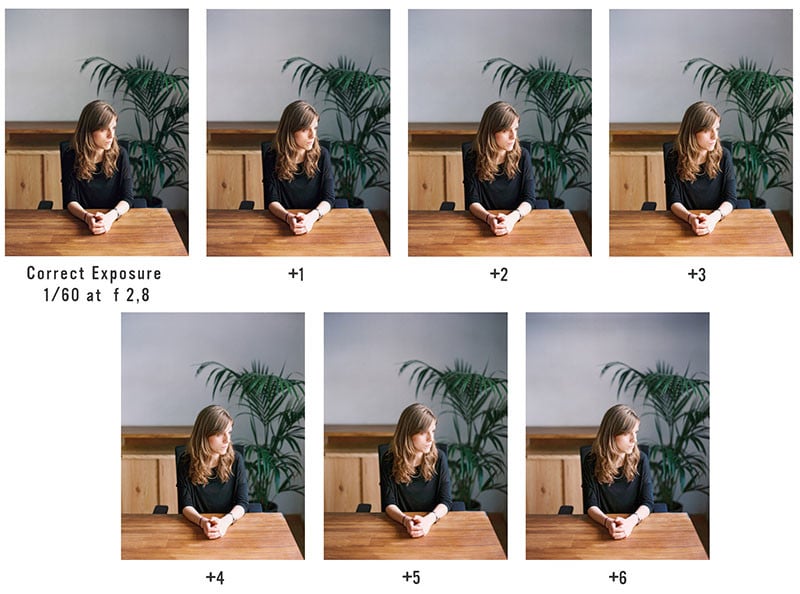 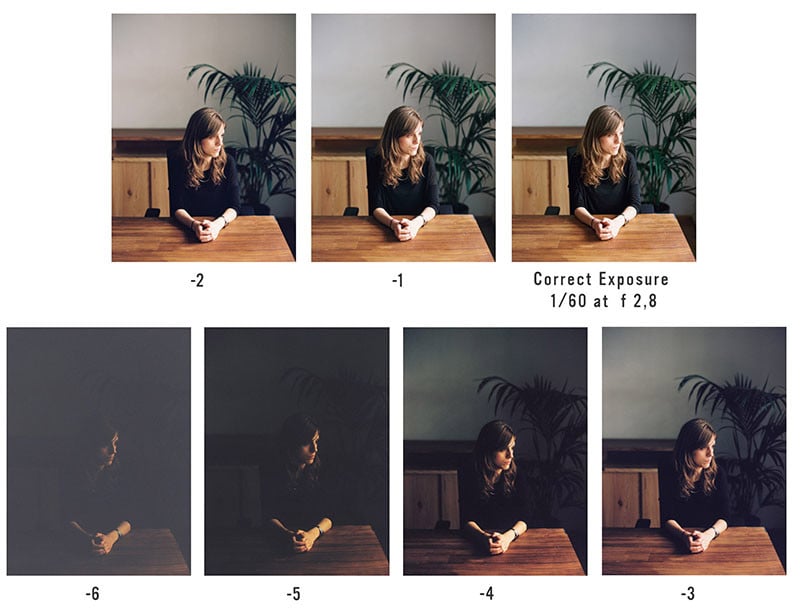 What conclusions can be made from this test?

Well, first of all… 6 stops overexposed? And it still looks amazing? That’s pretty sweet. Overall, there seems to be a higher number of usable shots on the overexposure side than on the underexposure side. So what does this tell us?

Unlike what happens in digital photography, overexposed film gets a little more saturated and you get more details on the shadows, but definitely no clipped highlights or “all-white” burnt images. That’s why it’s totally safe to say that if you’re in doubt between two possible camera values for your exposure you’ll always be safer on the “over” side than on the “under” one.

It must be noted also that underexposure brings out grain and colors shifts, and that extreme overexposure will make images flat, contrast-less and with magenta or yellow highlights.

Also bear in mind that these were scanned and then posted unedited. It goes without saying that with very basic edits, the -1 shot can be made to look maybe similar to the correctly exposed one. And, for example, the -3 can be scanned darker and slightly edited to look more “chiaroscuro”-like.

That’s a lot of info to digest! Hope this clarifies some doubts that we’ve heard so often, and that it helps you somehow to be more confident when you’re shooting and getting you closer to the look you want out of your scans.

About the author: Carmencita Film Lab is a film lab based in Valencia, Spain, that’s dedicated to delivering outstanding-quality processed and scanned film to its clients. You can find out more about the lab and connect with it on its website, blog, Twitter, Facebook, and Instagram. This article was also published here.