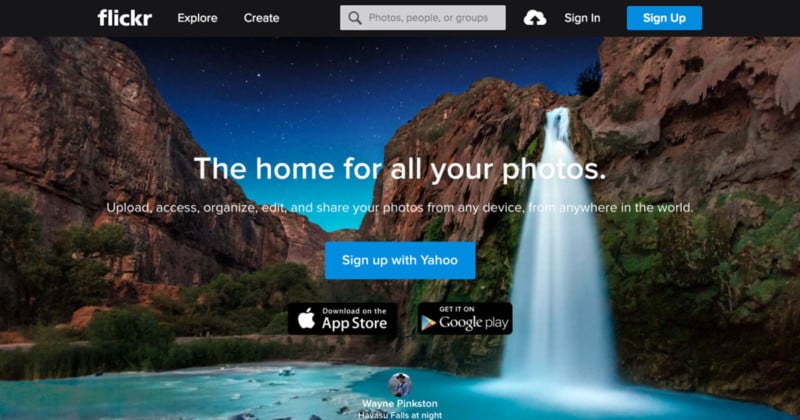 In yet another example that maintaining dominance within a space cannot be taken for granted, Flickr announced earlier this month that they are only allowing auto-uploads from the desktop for paying customers. Wired declared “Time to Give up on Flickr, Everybody.”

In the past few years, Yahoo spent considerable resources updating the service with both a mobile app and a very well-integrated desktop uploader, but in the end, it was impossible to thwart 1) years of Yahoo mismanagement, 2) an inability to monetize a huge repository of images (the Getty Images/Flickr Collection was a piss-poor attempt), and 3) the rise of Instagram (and the diminishing relevance of Web-based imagery in an app-centric world).

While the world was building Giphy, Imgur and Instagram, Yahoo was maintaining FlickrMail.

In the meantime, Google continued to learn from their Picasa acquisition (now shuttered) and Google+ Photos experiment (now shuttered) in rolling out a swell consumer tool named Google Photos that is well-integrated into the Google ecosystem (Gmail, Drive, Docs, etc). Photos not only has all the modern trappings that you’d expect (e.g. cloud-based, accessible anywhere from multiple devices), but is also becoming a proving ground for their image recognition AI with both auto image tagging and facial recognition (US-only).

For millions of users who have invested time in building their Flickr archives (one friend told me he’s uploaded 50,000 images so he’s staying put for now), sticking with the service is a bit akin to maintaining a Hotmail account in a Gmail age. It’s quaint, ain’t it? But given the precarious state of Yahoo, I would surmise the Flickr will eventually get spun off to another company that could use the platform to bolster their image offerings – perhaps a company like Dropbox that doesn’t have a true competence in image display/distribution.

More than anything, the diminishing power of Flickr reminds me that despite the importance of imagery in this “Visual Age,” consumers are unwilling to spend money for anything but gear. Paying for a service? Bah humbug. Consumers will demand “free”, even if that means surrendering their privacy (how do you feel about Google scanning every photo you upload to try to extract keywords, and “learning” from your data?).

Flickr had a great run, but sadly it might be best remembered for starting the trend of vowel-less Internet start-up names.