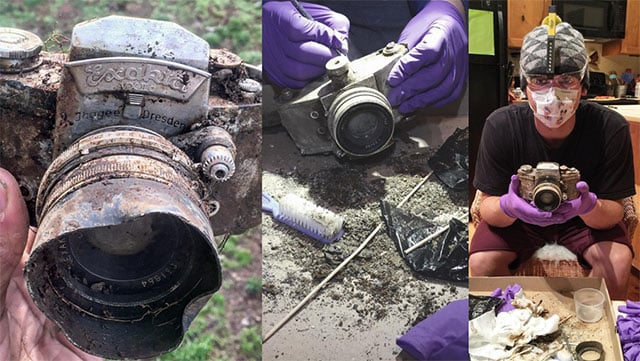 Ethan Field and Ron Campbell were hiking off-trail in Oregon’s Columbia Gorge last week when something shiny caught their eye. Bending over, they discovered an old camera that was mostly covered by rocks, dirt, and vegetation.

Here’s a short video clip of them finding the camera:

The camera appears to be a Exakta VX IIa, an East German SLR that was produced between 1957 and 1963. The corrosion on the camera and lens suggest that it’s been outside for quite some time:

“Obviously we were in a spot not many people have been,” Ron writes on Instagram. “Down a high steep slope next to the creek!”

They soon discovered that there was still film loaded in the camera, and now they’re working to get it processed to see if any historic photos appear.

After getting tens of thousands of Likes on Instagram, the discovery soon caught the attention of local Oregon news station KATU2, which just aired a segment on the find.

#LostandFound Camera 50+ years lost in Columbia Gorge just found by hikers. Only #LiveOnK2 this AM. pic.twitter.com/iTuAw8Dcxz

Ethan and Ron are also trying to locate the owner of the camera using a number found engraved on it — possibly a social security number, they say.

We’ll update this post if we hear of any interesting developments.

Update on 2/16/16: No photos were recovered from the old film inside the camera.

Image credits: All photographs by Ethan Field and Ron Campbell