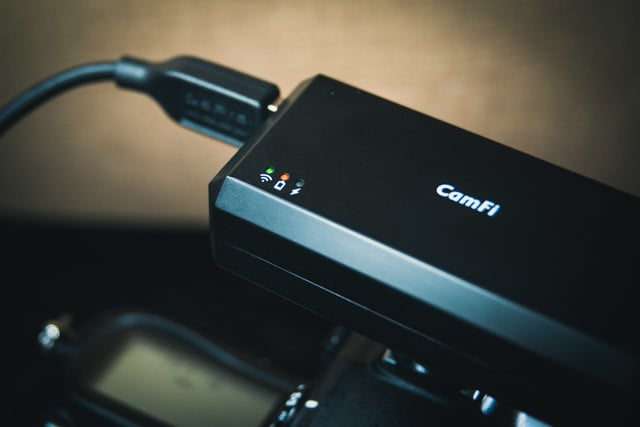 The day I bought my first Wi-Fi enabled “smart” camera was the day I realized how inconvenient it was to use a camera that lacked the enhancements offered with a built-in wireless connection. Not ever having been able to interact with my camera via my iPhone, it was truly a case of not knowing what I’d been missing.

But I quickly became enlightened. In New York City, I was effortlessly able to pull my pictures off my Sony A7 (what I consider to be one of the best cameras ever made) and share with my friends while riding the train. No hoops to jump through and no third-party Wi-Fi required.

In my mind this was the coolest thing ever and it became a highly used tool in my arsenal for both professional and personal photography.

However the majority of my professional work is shot on my Nikon DSLRs, few of which have had built in wireless for control, live viewing or exporting of images directly to your iPhone. There are workarounds, including but not limited to Nikon’s own $749 WT-4A or $599 WT-5A wireless transmitter (Canon has similar options available) or Eyefi’s broad selection of Wi-Fi enabled SD cards. 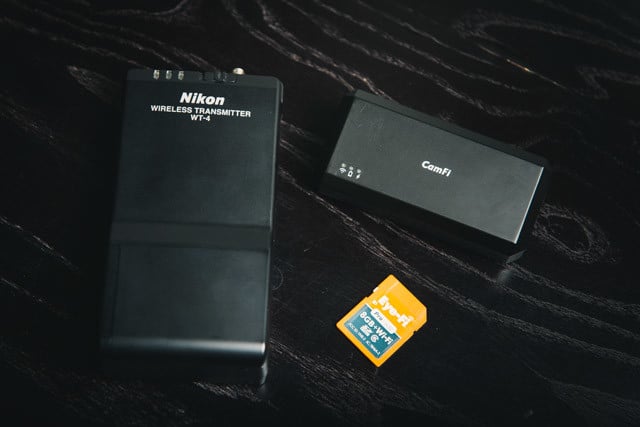 None of those are perfect solutions — each has its own pros and cons that I’m sure most are aware of. The ever popular Eye-Fi works well most of the time but in my experiences has suffered from connectivity issues. But it’s very inexpensive, only offering the ability to export pictures off the camera not control the camera or see “live view” of your camera via your phone.

For the older Nikons, their own WT-4A has great range and connectivity thanks to an external antenna or Ethernet port, but it’s bulky and works with only select Nikon cameras. Canon’s version of the WT-4A, the WFT-E7A is also bulky. Neither of these offer live view via your phone (though can via a laptop) and both are incredibly expensive. Nikon’s newer Wt-5a can do access via both a mobile device and laptop but it’s $599 and doesn’t work with older series of cameras such as the Nikon D3, D300, D90. 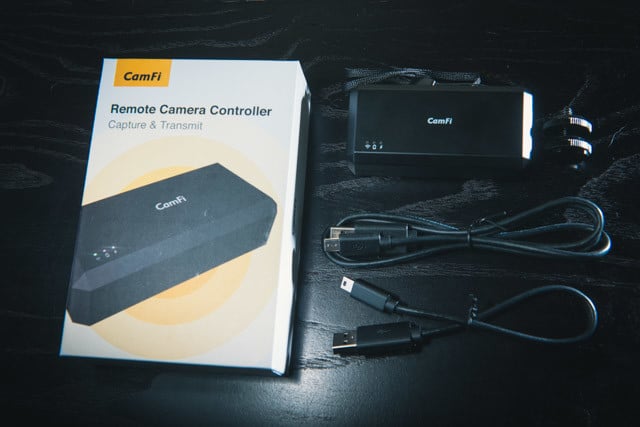 In steps the inexpensive new CamFi.

Before I talk about what the CamFi can do, let me first begin with some quick tidbits.

Firstly it’s brand agnostic, if you shoot Nikon and switch to Canon, you won’t have to buy a new CamFi.

Secondly, it supports a massive list of both old and new cameras, such as the Nikon D3 and the Canon 5D, which came out in 2007 and 2005 respectively. Here’s the full list of supported cameras:

If you don’t see your camera on this list I’d suggesting Googling to find out for sure if anyone out there has tried your body with the CamFi. I have a strong suspicion that there’s a few unlisted cameras that will work with the CamFi. Maybe not 100% functional but perhaps enough to warrant a purchase. 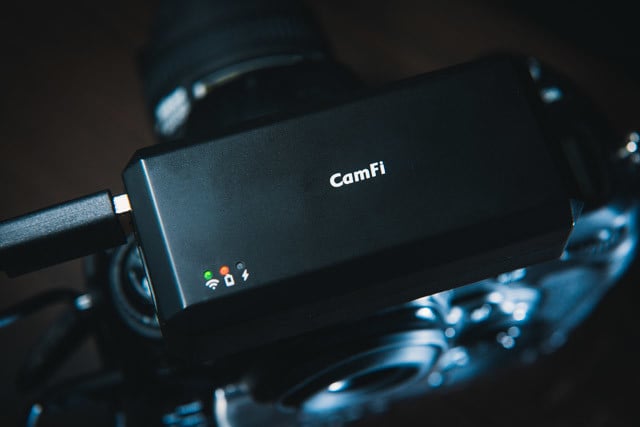 Speaking of purchasing, let’s discuss price. I’ve already mentioned how expensive the similar models of Nikon and Canon are, both sitting somewhere around $600 to $800. The CamFi is just $130 on Amazon. That, to me, is as close to a steal as you can get for a product this dynamic.

Now that you know the price and that it’ll work with your camera, I should probably tell you what it can do for you.

You’ve no doubt figured out already that it’s a wireless image transmitting device that can perform even with old “dumb cameras” via an iOS or Android device and even in a full desktop environment like Windows or OS X. 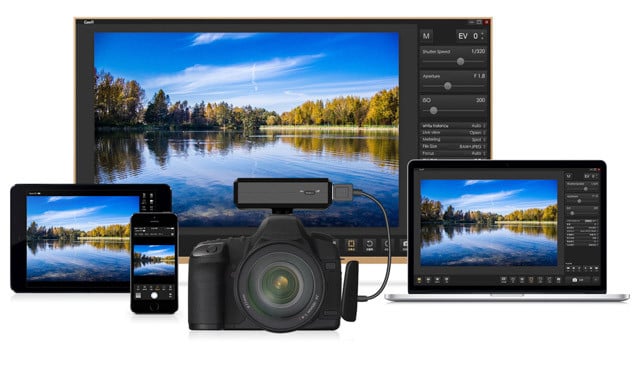 But that is just the beginning, because in those apps I could not only view my images but also control the camera — yup, really. I’m not just saying I could click a button and snap the shutter, but I could actually live view the through the lens composition from my camera to your iPhone!

It gets better still because in the app I could adjust my focus on autofocus lenses. First I would pinch-zoom to digitally zoom in on my iPhone, then tap focus on the live view and focus precisely on an object. If I needed to I could then micro-adjust the focus even more precisely using the app, rocking the focus forward or back in steps of -3, -2, -1 or +1, +2 and +3.

I can see that being a “never-leave-home-without” type of tool for anyone doing macro photography, still life or even landscape work. 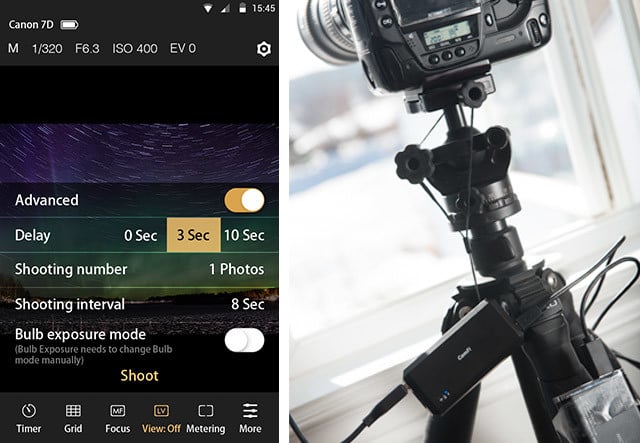 On top of all of that live view awesomeness, it can do time lapse photography, which is neat but kind of redundant given that a lot of cameras, old and new, do this already.

But if you happen to own an older lower end consumer level camera that lacks an intervalometer — as many do — this little box will open some doors for you. It’s internal battery spec’s a life of up to 6 hours and charges via USB, meaning you can plug in any external USB battery backup like most already own for their iPhone/Android and extend that CamFi battery even further.

I can foresee the CamFi being very popular with sports, wedding or event photographers. In these fields it’s common to mount a camera remotely; that is to say, out of arms reach for a long period of time, pre-focused and fired via Pocket Wizard or some other form of wireless release.

For remote work, the beautiful thing about the CamFi is it’s size. It’s so small. It’s not quite small enough to misplace, but it’s sleek enough to fit inside a pocket or utility pack on your belt without being in the way for those long periods when you won’t need it. When you DO need it however, it’s invaluable.

There’s two big reasons why this little CamFi is a delicious tool for remote camera work.

One is the ability to see your camera view angle and composition on your phone. This alone, along with the ability to tap focus or manually micro-adjust the focus are huge features. 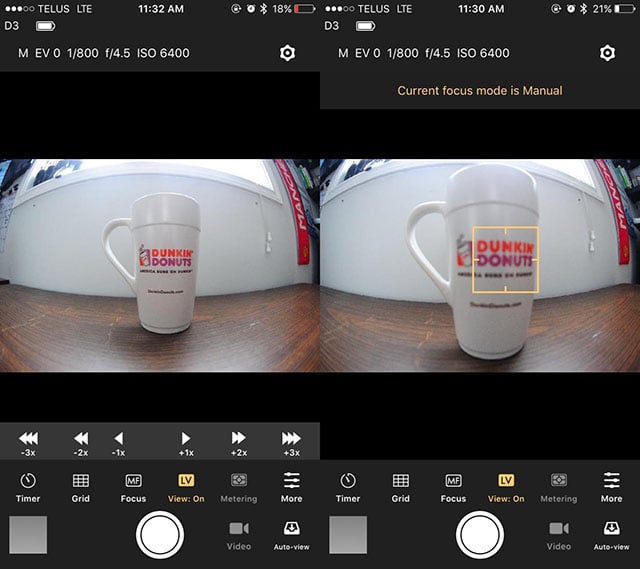 I’ve lost count of how many times I’d remotely mounted a camera, taped it all down and then realized that someway, somehow the focus was tweaked just a bit in the process, unable to fix the problem without backing off all the security holding the camera in place.

On some cameras you’ll even be able to adjust the cameras exposure values and white balance.

To me all of this “remote access” functionality is the main selling point of the CamFi. But selling point and marketing tend to differ. On the CamFi website, their most marketed feature is theis it’s ability to stream photos wirelessly from your camera to your television.

I’ve gotta be honest, this doesn’t excite me like it may others. There’s multiple ways to do this already, but if you’ve already ticked the box on some of the other CamFi’s abilities, this is just one more function you can stash away for later use.

If I were a big time studio photographer and didn’t already have a solution (or the solution I had was dated) I’d be giving this a serious look. An Android TV stick and a television is all you need to quickly begin proofing photos with clients, no additional Wi-Fi or computers necessary.

The CamFi can even send the RAW files straight from the camera to a computer for quick on the spot adjustments, export and print. 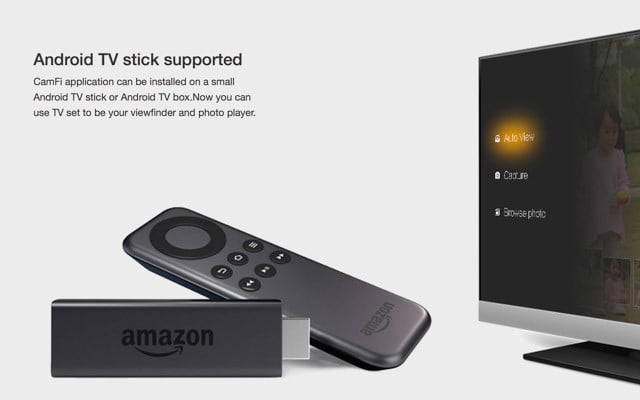 Lastly is the only puzzling aspect of the CamFi: the mounting and attachment. I’d describe this with one word: dumb. Included is a threaded hot-shoe adapter allowing you to mount the CamFi to the top of your camera. It looks stupid. It is stupid. 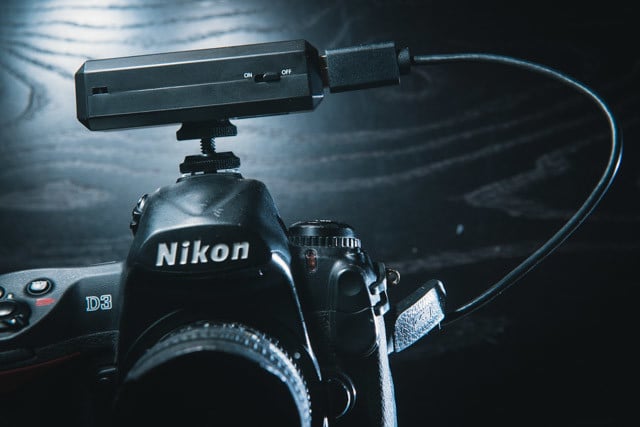 If I was going to be attaching the CamFi to my camera on a regular basis I would get a double ended threaded stud, cut it to length and super glued one end into the CamFi, thus allowing myself to mount the CamFi securely to my camera for studio sessions.

Having it mount to the hot-shoe makes it kind of hard to use a hot-shoe trigger like a Pocket Wizard or Radio Popper.

There’s no reason why there isn’t a hole through the middle of the CamFi case to thread the CamFi directly to the bottom of your camera, similar to the Canon wireless transmitter.

The point is, this little $130 device does a lot and can find a deserving place in the work flow of various different genres of photography. Suddenly a feature that was so overpriced in the WT-5A and WFT-E7A is now just $130 and really within the grasp of any photographer.

This Blind Photographer Paints with Light in the Midst of Darkness