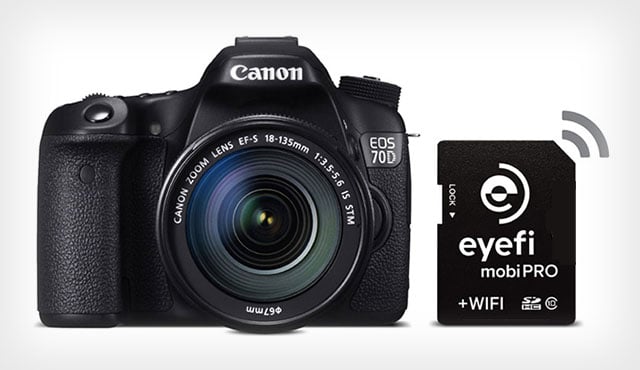 Eye-Fi has announced the new Mobi Pro, a 32GB WiFi SD card that the company is calling “the most powerful wireless SD card ever.” As more and more cameras are being launched with built-in Wi-Fi functionality, Eyefi is rolling out improvements to its memory card offerings to try and keep up.

The new Mobi Pro is a high-end card that sits a tier higher than the company’s Mobi cards, which are available in 8GB and 16GB capacities. It also offers a number of new features that serious photographers will appreciate.

First, you can now transfer RAW files from your camera to your desktop or mobile device. Mobi cards could previously only work with JPEG images.

Next, the card can now do selective transfers of photos. Instead of simply syncing the entire memory card to your external device, photographers will now be able to use their cameras menu to select and transfer only photos they’d like to send while ignoring everything else.

Finally, you can now connect to a trusted wireless network (e.g. at home) for even faster transfers of files instead of having to use the slower Wi-Fi network created by the card itself.

The Eyefi Mobi Pro is now available through the Eyefi online store and through other retail outlets for $100. It comes with a $50 1-year membership to Eyefi’s Cloud service for unlimited syncing and cloud storage.