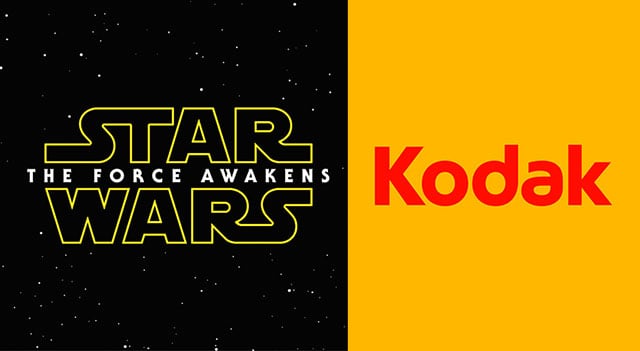 Back in July 2013, we shared how major filmmakers had banded together to rescue Kodak by committing to purchasing film from the company. One of the big names was J.J. Abrams, the director of Star Wars: The Force Awakens, which opens this week.

The new Star Wars was shot on Kodak film, and thanks to a number of other major productions using Kodak as well, Kodak says it may be profitable starting next year.

Rochester’s Democrat and Chronicle reports that Abrams used 65mm film for Episode VII, and that Episode VIII is expected to be shot on Kodak film as well.

“We’ve had a lot of success with people coming back to film, mainly because (of) the aesthetics of it,” Kodak commercial film president Andrew Evenski tells the Democrat. “It’s more natural looking.”

We’re so proud to be here at the world premiere of #StarWars #TheForceAwakens! The force is with Kodak! #ShotOnFilm pic.twitter.com/j2I0Xg3bLR

Kodak CEO Jeff Clarke tells the Hollywood Reporter that Kodak has gone from losing $100 million a year in its film business to breaking even the past 3 quarters of 2015. Clarke believes that Kodak will see profits from film in 2016.

700 people are still employed by Kodak’s film division, and most of them are working in the Rochester area, where Kodak is based. No word yet on whether the revival of Kodak commercial film will lead to a new era of Kodak photographic film. Cross your fingers.