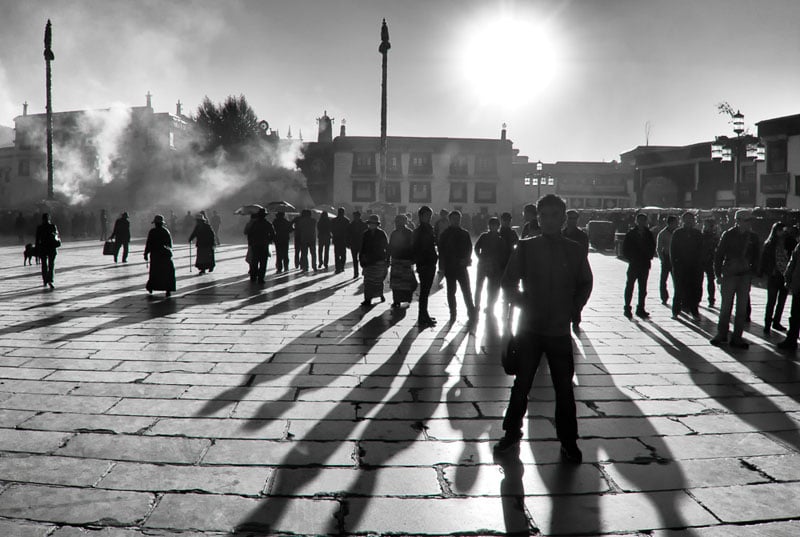 For the past 29 years I’ve been traveling to China for my day job as an industrial designer to manage the ramp-up of new products manufactured in China. I’ve discovered that it’s become a common career path for product designers to morph into Asian sourcing managers because of our background in product development. That’s exactly what happened in my career about 30 years ago, with the exception that I’ve remained active in product design plus I’ve become a street photographer in China over the course of the last 5 years.

I studied both industrial design and photography at the University of Notre Dame but decided to pursue a career in design after discovering the pathetically low starting salaries for photographers in 1980. Junior photographers lived just above the poverty level. During my design career I’ve developed consumer products ranging from clocks, to organization products (Rubbermaid), and now multi-tools & knives. The common element for all of these products is the “Made in China” label. I’ve been the guy who jumps on an airplane about 4 times a year and works with factories to get them manufactured. I spend about 25% of the year in China – 3 weeks at a time.

While working in China I’ve always photographed each factory I visit as a record of their capabilities and scale. Also after 29 years they’ve all started blending together, so it helps me remember them. I’ve probably walked through 200+ injection molding factories in China. I’ve seen the good, the bad and the ugly. For several years I actually worked for a China-based company and stayed in a company-owned apartment in a village near Shenzhen. I was living a pretty “local” lifestyle during that era.

About 5 years ago I went through a divorce that became the catalyst for several life-changing decisions. During that period I woke up to the fact that my China travel shouldn’t be viewed as work – but instead as a gift. Only a handful of people on the planet have the access to the collection of places I’ve seen. I’ve enjoyed over one hundred all-expenses-paid trips to a foreign country and was embedded in some amazing cities.

Before my epiphany I would hang out at the hotel and watch CNN in my room. Maybe I would go out for a few beers with the local factory guy at night. After I realized I was given the gift of traveling to China, I changed quite a few things in my life. I re-embraced my love of photography and invested in some mid-range gear so I could document my “new life” in China. But I wasn’t interested in the pretty postcard images you see in the travel magazines, I wanted to photograph the real China that I had been experiencing for 25 years but had previously let slip through my fingers.

I stumbled onto street photography by taking photos of strangers in a factory village about five years ago. I really enjoyed the ephemeral quality of street photos. That split second in time would never be repeated again – and I captured it. I started channeling my inner photojournalist and began stalking the village for unique photos.

After about 6 months I realized this was a whole genre of photography and began studying the history and culture of street photography to better appreciate the rabbit hole I was crawling into. I quickly learned that street photography was much more than high contrast, grainy black and white ambush photos.

While I’m in China, my work schedule varies from 10 hour days at factories to a single short meeting in the hotel lobby. Sometimes I have dwell-time waiting for samples to appear from factories. Now I fill those gaps with street photography, often walking several miles during the course of a day. I wander the streets of factory towns looking for cultural anomalies and interesting alignments of composition and light.

There aren’t a lot of western people in the Chinese factory towns I work in, so I stand-out, especially carrying a DSLR. Most people look at me first, then notice the camera. I think that’s the opposite from most street photographers. In the last five years I’ve never seen another photographer out on the streets of towns like Qingxi or Yangjiang.

Recently I started taking street photos at night using a flash. I realize this isn’t a very stealthy method to take street photos, but I love the gritty look of the image. I use a small Nikon P7800 (my poor man’s Leica) for night shots. I can palm the camera body and get some interesting angles without looking through the viewfinder. I call this my “night camera” because it usually follows me out to the bars at night and I use a wrist strap to prevent gravity-related problems. 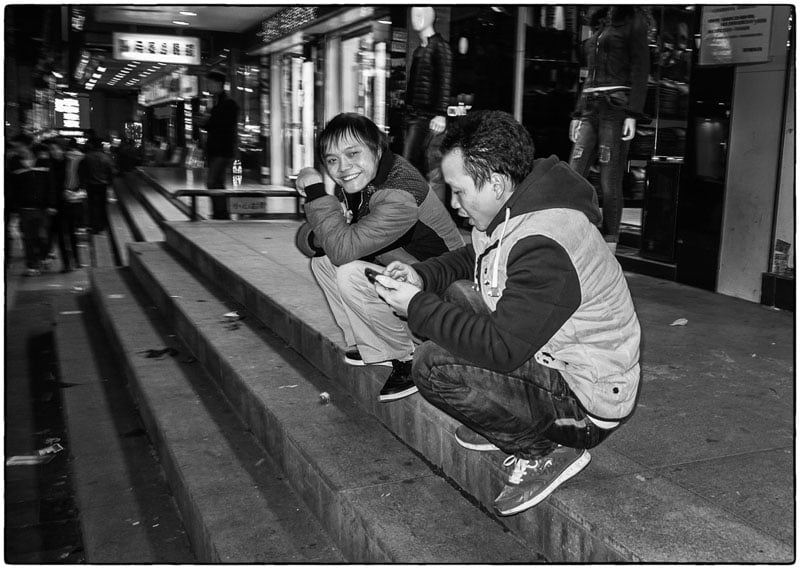 I’ve lost count of how many times I’ve been asked if I speak Chinese. It’s become one of my major regrets in life that I didn’t learn Chinese when I first began traveling to China, but I had no idea that I would still be going after 29 years! I’ve picked up several hundred words and phases over the years – mostly associated with ordering food and beer in restaurants. I also took a serious run at learning the language about 3 years ago as part of my epiphany, but it didn’t take. A combination of being too old to learn a new language plus I was an awful student. My tutor was a pretty Chinese PhD student and I had some difficulty focusing.

I rarely trot-out my crappy Chinese on the streets for fear of mispronouncing a word or phrase and accidentally insulting someone. There have been two exceptions when I asked permission in Chinese to take someone’s photo. One of them was to take a photo of twin girls who were being watched by their grandfather. The other time was a guy with an amazing gravity-defying hair style. But in most cases I use the language barrier to my advantage. People will rarely complain about having their photo taken if they don’t speak the photographer’s language. I can’t think of a single instance of someone refusing a photo in China!

When I first began shooting in China about 5 years ago I used a Nikon D7000 and a super-zoom. Since then I started collecting semi-fast prime lenses and have upgraded to a D7200. Even after experimenting with the primes, I end up shooting most of my street work using a new Tamron 28-75mm f2.8 and a Tokina 11-16mm f2.8. I like to shoot REALLY close up.

For about a year I also shot with a Nikon 85mm f1.8 so I could experiment with street portraiture. I love the shallow depth of field that lens provides when wide open, but it was tough to use for fast-moving street photography. Also by most standards, 85mm is a little too telephoto for street photography. It borders on “Creep Photography”.

Occasionally I use an 8mm fisheye in markets and tight areas like restaurant kitchens (two of my favorite locations). Photographing crowded wet markets in China is an incredible target-rich environment. I usually go shortly after sunrise to capture the amazing low angle light.

I travel to China with a Pelican case full of lenses and flash gear because I also shoot product photos for my company. Sometimes we don’t have time to get final photo samples to the US because of a tight schedule, so I set up a portable studio in my hotel room. I’m slowly buying studio equipment in China and storing it at a friend’s place. I have a full studio at home in the US for tinkering when I’m not in China. I enjoy the two ends of the photographic spectrum: complete control in a studio and virtually no control on the street. The proverbial yin and yang.

I read a lot of the street photography blogs – probably too many. Some of them preach the “rules” you need to follow to be a great street photographer and it’s beginning to trouble me. I consider photography to be an art form that’s boundless. If I want to crop, or shoot from the hip, or process my shots immediately instead of waiting six months I still consider myself a street photographer. I certainly appreciate the suggestions and potential “tools”, but I prefer to develop my own style through experimentation and refinement. 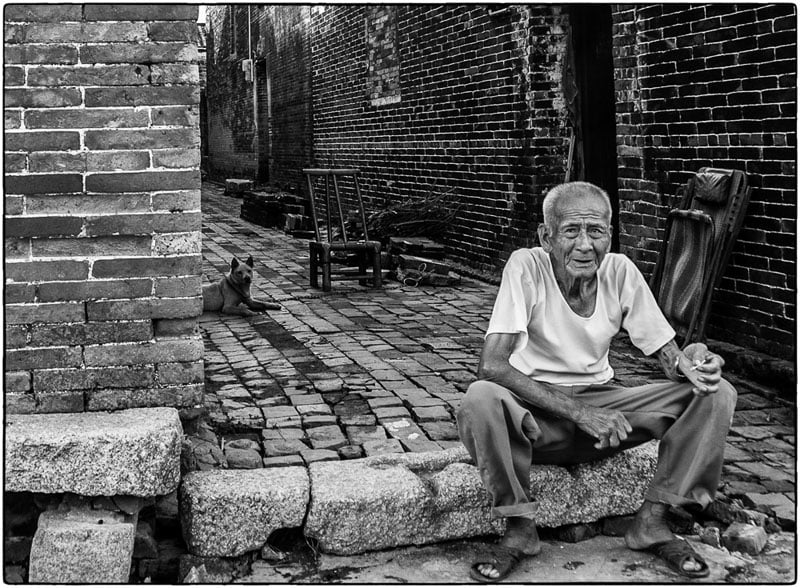 I agree with the photographer Ian Plant who said the “Rule of Thirds” should be changed to the “Tool of Thirds”. It’s a composition device that works in many instances, but you shouldn’t let it rule your life. Creating boundaries and rules for a whole genre of photography is ludicrous. If a photographer wants to work with self-imposed constraints to develop a style or common look for a project that’s fine. But preaching “absolutes” for street photography is counter to the definition of art. Just because HCB did it doesn’t make it gospel. Do other genres of photography (or art) have the same lists of rules? Probably not.

Having said that, I do have 5 personal “Tools of the Road – err… Street” when I shoot in China. I’m not suggesting these are absolutes that every street photographer should embrace. Far from it. These are simply the things that go through my head:

1.) I pick a camera body and two lenses. I like to have choices. Other street photographers prefer to use the “one camera – one lens” strategy. I’ve tried that and have often regretted not having a different lens for a new environment. But I always keep it down to two lenses that cover a broad range of focal lengths.

2.) Check all of the camera settings BEFORE leaving the hotel. One day I accidentally shot at ISO 1,000 all day. Duh.

3.) Anticipate great photographs. Look for the shot from all angles – including up. Always be aware of your surroundings – as if you were in a battle zone.

4.) 99.9% of the time photos of the back of people’s heads isn’t interesting, and the other .1% better have a damn great environment! People show emotion in their face. That’s what I target. A combination of emotion and environment makes a truly great street photo (or street portrait).

5.) I do a quick “dignity-check” before taking a photo. I no longer take photos of homeless people or beggars in China. There are plenty of other people in the 1.3 billion population.

My “Faces & Places in China” street photography project is coming up on its 5th anniversary in a few months. Recently I looked back at some of my early images and realized they were absolute crap. The processing was awful and the composition was ordinary. The content brought back great memories, but I’ve grown a lot as a photographer since those early photos. I guess that’s a good thing. Like most photographers, I’ve experimented with many phases – HDR, processing filters, selective color (yuk), etc. I think I’ve come full circle now and will be processing “au naturel” in the future.

I’ve also realized all of those early blurry photos weren’t entirely my fault. The D7000’s focusing mechanism isn’t the greatest for fast street photography. My new D7200 is awesome. I’ve put myself on a self-imposed 4 year cycle for new camera bodies. I think my next camera will be full frame and I’ll only be buying appropriate lenses until then. Or maybe the next generation Fuji viewfinder. Who knows.

Oh, and I’ve started dating a great (English speaking) lady in Shenzhen, China and she has promised to teach me Chinese. Yeah. We’ll see how that goes…

About the author: Jim Hofman is a businessman and street photographer who has been traveling to China over the past 29 years, with an average of 5 to 6 trips per year. You can find a collection of his work on his website.