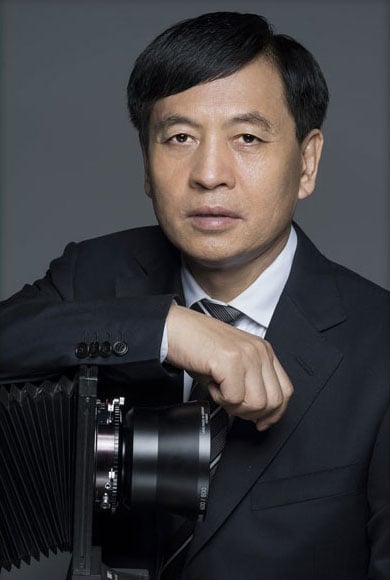 As China expands its anticorruption initiatives, quite a few government officials have met their political demise through being caught in a wide range of unethical behavior. One of them, a politician named Qin Yuhai, was busted under different circumstances than most: his corruption was related to his love for photography.

The South China Morning Post reports that Qin, seen in the picture above that was used for a Kodak-sponsored exhibition, received millions of Chinese yuan worth of cameras, exhibitions, and gifts in return for business contracts.

After investigating Qin’s career and dealings, the government’s Central Commission for Discipline Inspection concluded that Qin had become obsessed with photography while serving as mayor of the city of Jiaozuo. After shooting photos to promote his city’s tourism industry, Qin began devoting increasing amounts of time toward making pictures rather than policies, reportedly doing photo shoots in the mountains every weekend and holiday.

Qin eventually became a council member of the China Photographers Association and began winning national prizes for his images while holding exhibitions around the world. Companies took notice of his hobby and used it to win his favor. “For officials obsessed with photography, if you give him a camera, it is like giving him opium,” one photo company in Beijing tells SCMP.

One company was found to have spent nearly 5.8 million yuan ($935K) promoting his photography both in China and internationally. Another spent hundreds of thousands purchasing 24 cameras for Qin. He was also pampered with photos being published, documentary features, and special exhibitions.

In exchange for the photo-related gifts, Qin use his position to approve lucrative contracts to those businesses.

Qin’s downfall came late last year when the government caught wind of his corruption and began to investigate him. The Wall Street Journal reports that Qin soon began “ditching photography gear worth hundreds of thousands of Chinese yuan, including camera lenses and other equipment found ‘abandoned’ by police and security personnel within his residential compound.”

Qin was expelled from the Chinese Communist Party last month as a result of the investigation. Photos of his that had been on display in various subway platforms in Beijing have since been removed from those stations as well.

The Mirrorless Party of 2015: A Fun Stop-Motion Look at the State of the Industry