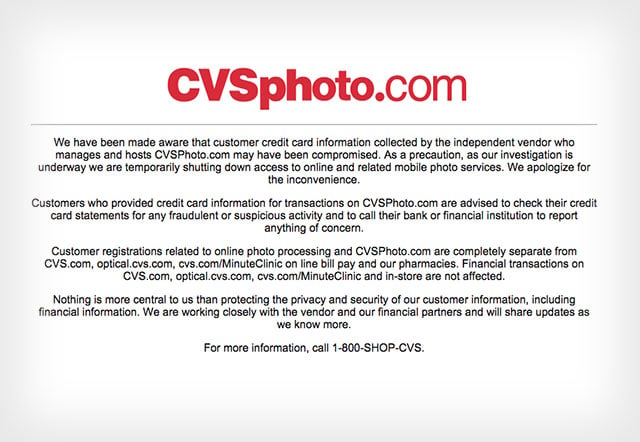 CVSPhoto is offline. The popular photo printing business of the nation’s second largest pharmacy chain has revealed that customer credit card information may have been compromised. As a precautionary measure, both the website and the mobile photo services have been shut down while the possible breach is being investigated.

In a message posted to its front page, CVSPhoto says that it has been “made aware that customer credit card information collected by the independent vendor who manages and hosts CVSPhoto.com may have been compromised.”

If you’ve ever provided CVSPhoto.com with your credit card information in order to buy prints or other photo products, you’re being advised by the company to monitor your credit card statements for suspicious activity.

CNN Money reports that the “independent vendor” is a Vancouver-based company called PNI Digital Media, which is owned by Staples, which itself had 1.2 million credit card numbers stolen in a hack last year.

There’s currently no word on the scope of this breach and how many customers may potentially be affected, or whether other types of data (e.g. customer photographs) were possibly stolen as well.