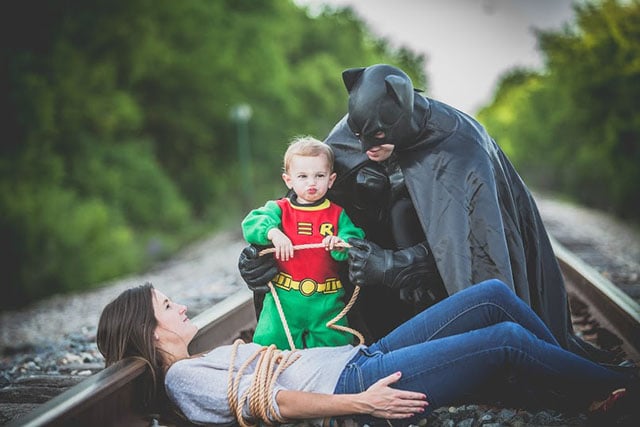 A family in Wisconsin says that they’ve received threats online after pictures from a recent family photo shoot went viral. The shots show the family dressed up in superhero costumes and acting out a rescue scene on railroad tracks.

There have been numerous stories in recent years of photographers, newlyweds, and film crews having fatal accidents or close calls while doing a shoot on tracks, as trains often travel so fast that people have little time to react before being struck.

Mike and Roxanne Daly of Hartford, Wisconsin, didn’t get the memo though, and recently picked train tracks as the setting for their photos, which show Mike and his son Finn as Batman and Robin rescuing Roxanne, the “damsel in distress.” Here are some of the shots that were captured by Eric Thiele of Thiele Photography: The photographs quickly went viral online, appearing on some of the Web’s biggest news sites and blogs. But not everyone reacted warmly towards the images. CBS 58 reports that many people were angered by them — so much so that they directed personal attacks at the family, posting their home address online and threatening to visit at night:

The critics argue that the parents put themselves and their baby in harms way for their photos, and that the viral photographs promote the dangerous and illegal idea.

The family says they were never aware of how dangerous the idea was, and that they’re not planning to do any more photo shoots on train tracks.

Alert: Freedom of Panorama Under Threat in Europe