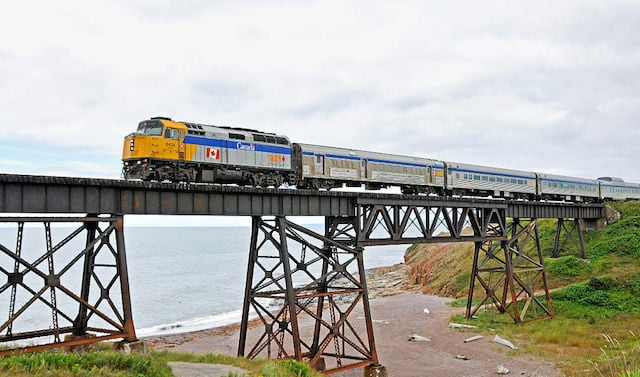 One day the stories of photographers being hit or nearly hit by trains while taking photos on the tracks will become so prevalent that people just stop doing it altogether, but today is not that day. Just this last weekend another unidentified photographer and the newlyweds he or she was photographing had an uncomfortably close call.

According to a report by MetroNews Canada, the incident happened on the tracks of the Orangeville Brampton Railway, on a 1,150ft long bridge that was 85ft tall at its highest point and offered no obvious means for escape.

Fortunately for the participants, the train approaching them was the Credit Valley Explorer, a sightseeing train, and as such it was moving very slowly. It was able to come to a safe and complete stop, but before it did, Mike Davis (a local magazine publisher on board) captured this photo of the group scrambling to safety.

The freight trains that frequently use the line would not have been moving at such a leisurely pace, said Steve Gallagher, manager of operations for the Orangeville Brampton Railway.

The train crew, understandably upset given that “No Trespassing” signs line the tracks, confronted the couple, but according to the report they ‘declined’ to stay and talk to the police, hurrying off in a stretch limo instead.

It’s a sadly common story and one that doesn’t frequently end so uneventfully. The couple and photographer are incredibly lucky they didn’t get hurt and were able to simply drive away without any consequences for their actions.

We just hope this story, or in their case the first hand experience, serves as a warning that those “no trespassing” signs are not merely suggestions.