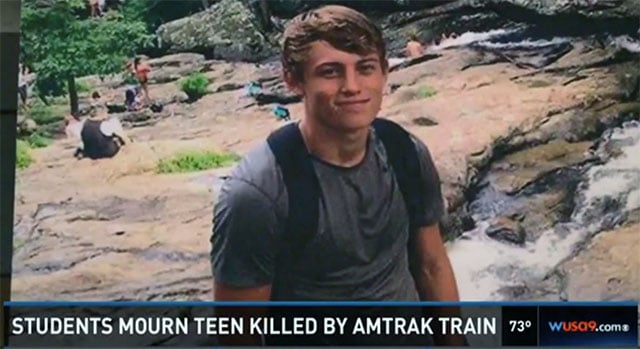 There has been another tragedy involving a dangerous photo shoot on train tracks. A 16-year-old boy was struck and killed by an Amtrack train this past Monday afternoon while doing a casual photo shoot with his girlfriend.

The Washington Post reports that John DeReggi, his girlfriend Natalie Crim, and Crim’s sister (the photographer on the shoot) were at a “picturesque spot” at some railroad tracks in Boyds, Maryland, when the accident happened.

rest in paradise john?? you know I'm right around the corner. I love you so much❤️

The location is reportedly a popular photo spot for local teens — the Washington Post says that “lots of kids have been getting their photos made there.” John and Natalie’s photos were intended to mark the couple’s one-year anniversary and for part of a school assignment.

20 minutes after leaving DeReggi’s home for the shoot, the boy’s mother received a frantic phone call from Natalie saying that “John got hit by the train.”

Investigators say that the train was traveling at more than 70 miles per hour, faster than the kids realized, and that John simply wasn’t able to get away in time. Approaching trains can be quieter than people may think — especially with what they see in movies — and figuring out how fast they’re going can be difficult due to perspective.

Bends in tracks can make approaching trains even harder to detect, and that’s reportedly what happened in this incident.

Whether you’re a photographer or just someone looking to do a photo shoot, please heed the warning that can’t be repeated enough these days: don’t do photo shoots on train tracks.

VSCO Keys Lives On By Going Free and Open Source

A Photo of a Sunset Over the Mountains of Pluto