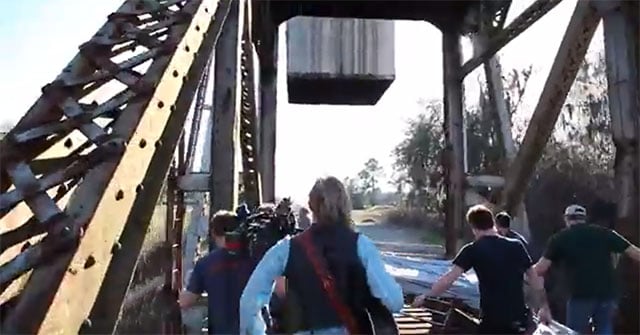 There have been a number of cases in recent years of people getting struck and killed by trains after doing photo or film shoots on train tracks. One of the cases last year involved the filming of a movie titled “Midnight Rider.” While filming on a narrow trestle bridge, a train passed through and killed one of the crew members.

The director, Randall Miller, pleaded guilty to involuntary manslaughter and has now been sentenced to two years in prison and eight years of probation for his recklessness.


Miller will also be required to pay a $25,000 fine, perform 360 hours of community service, and refrain from directing for the 10 years of his sentence.

The incident happened on February 20, 2014, when the movie’s crew ventured on a narrow railroad trestle to film a scene. A train approached unexpectedly, and the crew wasn’t able to get off the tracks in time to reach safety.

A number of crew members were injured, and a 27-year-old camera assistant named Sarah Jones was struck by the train and killed.

One of the pieces of evidence shown in court was a horrifying video recorded by a videographer on the team. It shows the crew members scrambling to flee the tracks as the sound of the train’s whistle can be heard. The video cuts out just as the train reaches the crew:

The train operator has since produced evidence showing that it had refused permission after the film’s crew had requested it. Miller’s argument is that his location manager never informed him of the lack of permission, and that he’s simply the scapegoat after a tragic failure in communication.

After delivering the sentencing, Judge Anthony Harrison said he hoped the case would help prevent this type of accident in the future. “I hope that this day will contribute to your goal of sending a message of safety to the industry” and “give some meaning to this tragedy,” he said to the Jones family.

If you’re ever choosing a location for a photo or video shoot, make sure active train tracks stay off your list — the risks just aren’t worth it.

(via Variety and NYTimes via TOP)