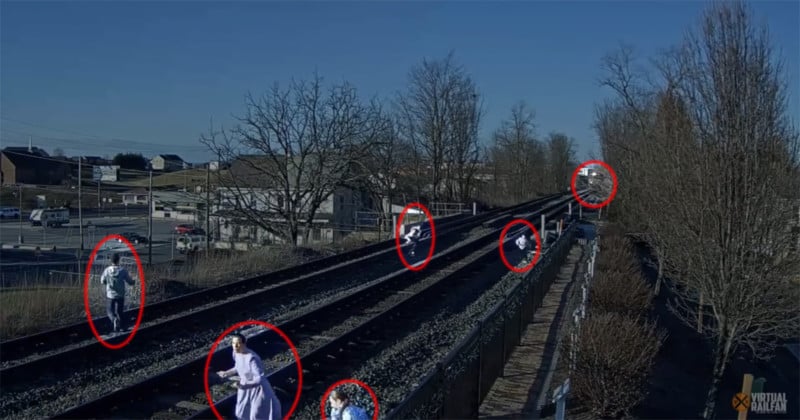 An ill-advised family photo shoot on a set of active train tracks in Greencastle, Pennsylvania nearly ended in tragedy when a freight train came barreling through, narrowly missing the photographer, parents, and five children.

The video was captured by Virtual Railfan, Inc and posted yesterday as “no better example why you should stay off the tracks.” Already it’s going viral as photographers and trainspotters alike share it on social media alongside angry warnings and admonitions to never ever do a photo shoot on train tracks unless you have the proper permission and can be absolutely certain of safety.

In the video, a family of seven plus a photographer are wandering up and down on the tracks when one of them screams “here comes the train.” From there it’s a mad scramble to get everyone—including a few very young children—off the tracks before it’s too late. You can watch the full ordeal below:

Fortunately, tragedy was avoided in this case, as all eight people got off the tracks in time, but as we’ve said many times before: it’s illegal and simply not worth the risk. It was just a few months ago that a 17-year-old was killed during a senior portrait shoot on the tracks in Oregon, and a woman nearly lost her life in December when a train got so close it tore a piece off of her coat.

Each time this happens, we’re inclined to share the same video: a TODAY show segment that showed just how silent and deadly a fast-moving freight train can be. In this case, someone saw the train coming from a distance; had they seen it just a few seconds later, things could have ended very differently.