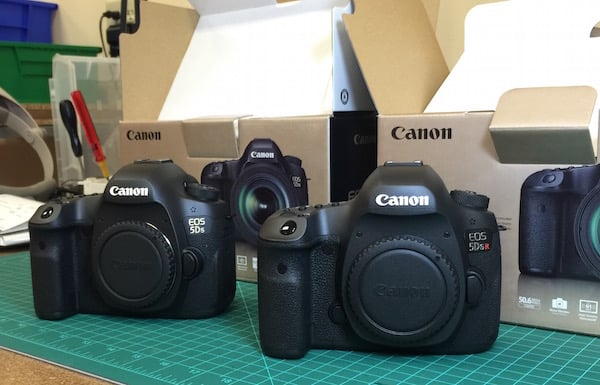 Like everybody else, we at LensRentals were pretty excited to get our hands on Canon’s new 5DS and 5DS R. There are already a lot of hands-on articles about the cameras that probably have told you more than you need to know to make your purchase decision. Of course, for most of the Canon shooters who read this blog, the purchase decision was just which place you want to buy it from.

For me, I want some lab data to see just how much of a difference those megapixels make. More particularly, I want to see how much of a difference they make when shot through a reasonably good lens, an excellent lens, and an adequate lens. Some people want to simplify things too much and claim certain lenses are ‘good enough’ for the new cameras and others aren’t. It’s not that simple.

So we begged and threw temper tantrums until we were able to have a couple of the new cameras for a couple of days testing in our Imatest lab. That was enough time for us to get a quick overview using several different sample lenses, but it will be months before we have a good database of which lenses are most capable on the new cameras.

There are several significant differences between the “S” and “R” models and the standard 5D Mk III that these new cameras are not replacing. Lots of real reviews will cover this in detail. Both the new cameras have 50.2 megapixel sensors, compared to the 5D Mk III’s 22.1 megapixels. The 5DS R version has self-canceling low pass filters; effectively eliminating the low-pass filter blur. That should give the 5DS R version a bit higher resolution than the 5DS.

There is one point I want to make early and often, though. Determining how much difference the sensor will make when it is one piece of an imaging system is not a simple thing. Some experts will throw out a calculated number, saying you can see ‘this much’ resolution difference when moving from a 5D III to a 5DS or 5DS R. That number will usually be accurate if you are considering just the center resolution. When using a lens with a long exit-pupil distance, like many telephoto lenses, the calculated number may even be accurate off-axis. On the other hand, some lenses will not show much resolution difference in the edges and corners of the image.

Over time we’ll find which lenses take best advantage of the new, high-resolution sensors, and which don’t. Almost every lens is going to benefit to some degree, of course. The idea that certain lenses are “50 megapixel ready” is kind of silly. The 18-55mm kit lens will still have more resolution on a 5DS than it will on a 5D III.

We used an ultra-high resolution backlit film chart for the telephoto Imatest images, trying to make certain the chart used didn’t limit the resolution of the final images. Given the very high resolutions these sensors can produce with excellent lenses, I had some concern that a printed paper chart could become the rate limiting factor when testing resolution. (I expect some test labs that use inkjet printed resolution charts are going to find this to be a problem. Linotype prints probably not so much.) 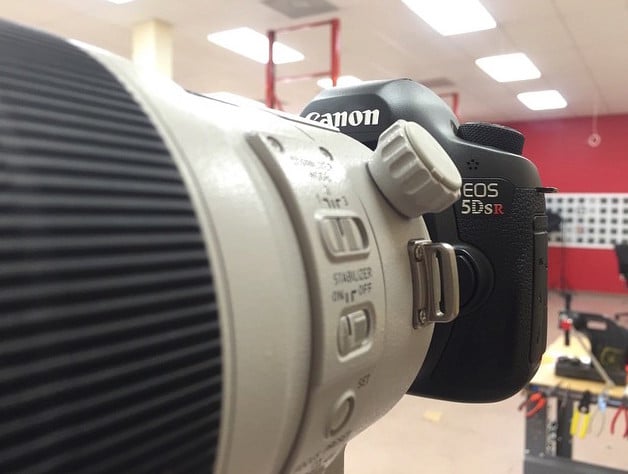 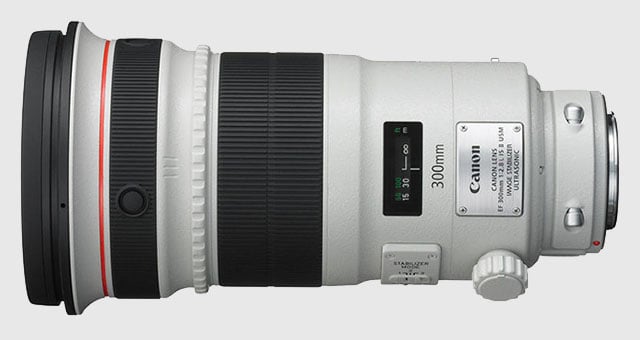 The Canon 300mm f/2.8 IS II is a really sharp telephoto lens that is still small enough to work with easily in the lab. We shot all 3 cameras through the same copy of the lens. Mirror lock up, 10 second timer, focus bracketing, and all the routine techniques used in all our other Imatest articles were used. The table below shows the resolution differences between the original 5D Mk III and the two newer cameras when shot through the same copy of the lens.

Resolution increased about 30% when moving from the 5D III to the 5DS in the center and for the average of the entire surface of the lens, which was about what we had expected. Resolution in the absolute corners increased about 20%. This isn’t shocking since we would expect the corners of the image to be more limited by the lens (although I had hoped such an excellent telephoto lens might do a bit better).

I was a bit surprised at the difference between the 5DS and the 5DS R in this test. The 5DS R version provided about a 10% increase in resolution over the 5DS. 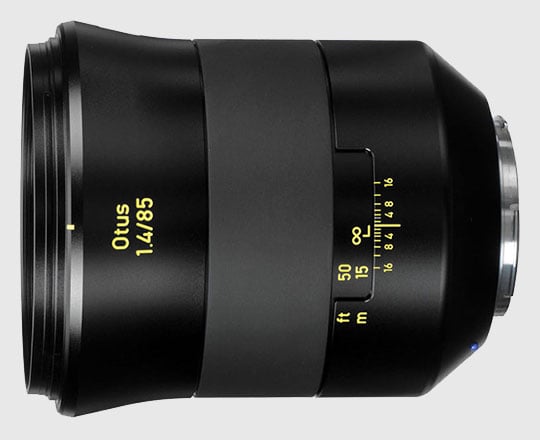 We were wanting to make this test about the cameras more than the lenses so we chose one of the sharpest standard range lenses we could think of, the Zeiss 85mm f/1.4 Otus. We repeated the test the same way, shooting at f/2.8 again.

With the Zeiss 85mm Otus things are just a bit different. The improvement between the 5D III and the 5DS is about 20% in the center, slightly less off-axis. The 5DS R version adds about 5% more resolution compared to the 5DS. I was a bit surprised at the result and repeated it several times to confirm the numbers and it was so. The reason I was surprised is the Otus is the highest resolving lens, and my first thought was it therefore would benefit the most from the higher resolution cameras. 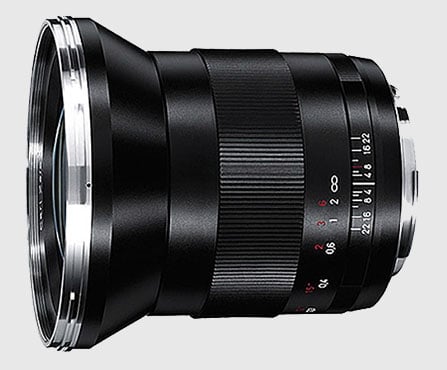 For this test we moved back to our largest printed paper resolution chart and are shooting even then at a fairly close distance (about 9 feet). The Zeiss 21mm f/2.8, old as the design is, is still on of the sharpest wide-angle lenses in the edges and corners.

Again, we see the resolution is greatly improved, with the 5DS MTF50 numbers about 30% higher than the 5D Mk III, even in the corners. Throughout most of the image, the 5DS R MTF50 numbers are about 10% higher than the 5DS. However, in the absolute corners there is only a small difference between the 5DS and 5DS R cameras. From other things we know about this lens, I would assume this is because the corner resolution with this lens is limited by astigmatism.

I want to clarify this just a bit because depending upon how a tester is presenting data, you may see them present this corner data differently. Imatest doesn’t measure astigmatism exactly, but does measure slanted lines that are nearly vertical and nearly horizontal. When I present corner data I average 8 numbers: the horizontal and vertical reading in each corner. Someone else may present only the best corner number, or the median corner number, or just vertical or horizontal numbers. This might have a corner number better or worse than what we are presenting. 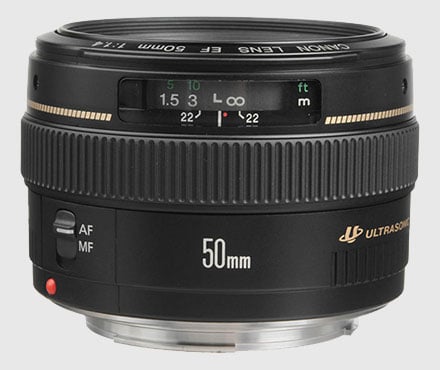 I wanted to add this to make a point. I’m beginning to read people discussing “50-megapixel capable lenses” and I’m afraid it creates some confusion. It’s true, these high-resolution sensors are going to magnify the difference between lenses. But that doesn’t mean they don’t benefit every lens. With this in mind I went and found a battered old copy of the Canon 50mm f/1.4 lens. This is a decent, although few would claim fabulous, lens. This particular copy was also very slightly decentered. It wasn’t even the best of the 50mm f/1.4. I test all three cameras with this lens just like I did the others (except this test was done at f/1.4 — I want the lens to be just as weak as it could be).

Even with a weak copy of an average lens, there’s no question the high resolution sensors improve the resolution, at least in the center. The improvement isn’t as great as it is with the excellent lenses we tested above. The 5DS had about 20% better resolution in the center and as an average compared to the 5D III. Corner resolution, though, changed very little. The difference between the 5DS and 5DS R was also negligible with this lens. But there’s no question even a weak lens shows significantly improved resolution on the new cameras.

It will take months of testing and photographer experience to determine which lenses do exactly what with the new cameras. But it’s not a critical thing to know at first. Every lens will perform better on the new cameras, at least in the center of the image. How much of a difference will range from noticeably better, to “wow” depending upon the lens, type of photography, and subject matter.

About the author: Roger Cicala is the founder of LensRentals, one of the top camera gear rental companies. This article originally appeared here.