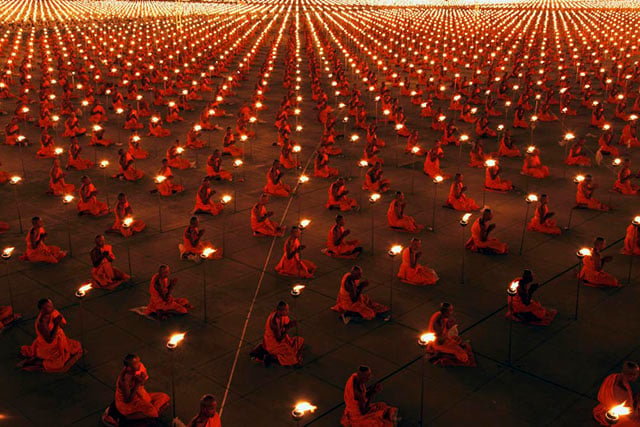 It’s pretty common for great images to go viral on social media sites, but what happens when a photo goes viral with an incorrect caption… twice? Bangkok-based photographer Luke Duggleby recently experienced that firsthand when his 2010 image of 40,000 Thai monks in prayer at the Dhammakaya Temple made the rounds on social media following the Nepal earthquake, captioned as “100,000 monks in prayer after the Nepal earthquake as a necessary gesture of power.” Years ago, the image had gone viral in a similar fashion, only that time it was captioned “praying monks in Myanmar.”


Luke’s photo has been shared countless times over the past couple months with the altered Nepal caption—here are just a couple of the places we found it:

Here’s the real story of how the image was made: Years ago, Luke began photographing the monks at the Dhammakaya Temple in Thailand. In 2010, during the celebration of the Buddhist holy day of Makha Bucha, Luke made his third trip to the temple and created a powerful series of images including the aforementioned image of 40,000 Thai monks in prayer.

During Luke’s repeat trips to the temple, he had gained the trust of the monks. Before the Makha Bucha ceremony, they gave him a call and told him if he bought and wore a white Thai-style meditation jacket and trousers, he could have complete access and be free to roam around at will—a rare occurrence for an observing photographer.

During the prayers, Luke managed to use air vents as foot holds and scramble to the top of a control room to get a photo from above. He sat atop the control room and waited patiently in the heat (almost 90 degrees Fahrenheit that day) for the sun to drop. Eventually, the sun set, the candles came out and Luke was ready with his tripod to get the shot he had been waiting for. Check out the full image below:

The photo was first published along with Luke’s other images in the series in the Wall Street Journal in 2010. Around that same time, Luke posted the photo to his website and his personal Facebook page. In 2011, Luke received a Facebook message from a man in South Africa—he was asking if he could post Luke’s image of the Thai monks to his Facebook page with proper credit. That’s when Luke said he first learned of the image’s journey around the web:

“I asked him how he saw it, and that was when I saw that it had been shared some 15,000 times without any credit and captioned as ‘Praying Monks in Myanmar’,” Luke says. “He had tracked me down to ask, which was very kind of him. That is when I realized the image had gone off on its own, out of my control.”

It’s easy to see how a photo like this can go viral—it’s a beautifully composed shot of a massive, unusual event. But what good can come of an image that is traveling around social media without credit and with an incorrect caption? Naturally, Luke was initially unhappy about the exposure (or lack thereof), but he learned from it and decided to get a stronger grasp on social media. He was amazed that a photo posted to a personal Facebook account with only a few hundred friends could go so viral, so he decided to setup his photography fan page so that he could continue to promote his work to a larger audience.

“There were just two problems with all this extra coverage. One, I wasn’t mentioned in any of it as the image was mostly used without credit and two, the image was described as something that it wasn’t. It was an odd sensation,” Luke says.

“I was annoyed whilst being honored that that many people had chosen to share the image that many times. But I frequently get very nice messages from people from all over the world who intentionally tracked me down because it has inspired them in a certain way and they wanted to thank the artist.”

In 2012, the image was published again as a double-page spread in the “Visions of Earth” section in National Geographic Magazine. Again, the image went viral, although Luke doesn’t have any idea how many times it has been shared from that particular spread. 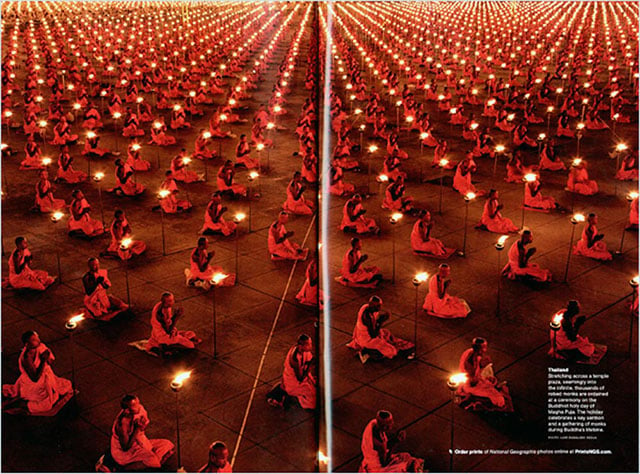 That brings us back to the present. A few weeks ago, Luke received a message from a Facebook friend who he describes as a lovely lady in Australia who regularly updates him when she sees his images being used without proper credit. That’s when Luke saw that a popular American hip-hop artist with more than nine million Facebook likes, B.o.B., had posted his image on his Facebook page. Above Luke’s credit-less image was the latest incorrect caption: “100,000 monks in prayer after the Nepal earthquake as a necessary gesture of power.”

Who knows how many times the image has been shared this time around, and who knows if it’ll happen again in the years to come. Luke hasn’t taken any action regarding the improper use, and he doesn’t plan to do so — mostly because it would be extremely time-consuming and nearly impossible to get a handle on. When people use it on blogs, Luke politely asks for credit and a link to his website, but on Facebook there is little he can do. To Luke, it’s a great compliment that all those people have shared his image because they liked the picture in some way.

For him, the most important issue is the misinterpretation of his photo: “The old famous quote that a ‘photograph never lies’ is still followed today by almost everyone. A photograph shows what it shows, and until the rise of Photoshop that was most often the case,” Luke says.

“But a photograph must always be accompanied by an explanation, and if that explanation is incorrect, misleading or a total lie then the image becomes something that it’s not. With social media being able to access so many people very quickly that could be a very dangerous thing.”

Check out Luke’s website if you’d like to see more of his work. Check out the full series from the temple here, and read Luke’s blog post about the experience here.

About the author: Kelley King is part of the team at Wonderful Machine. This article originally appeared here.