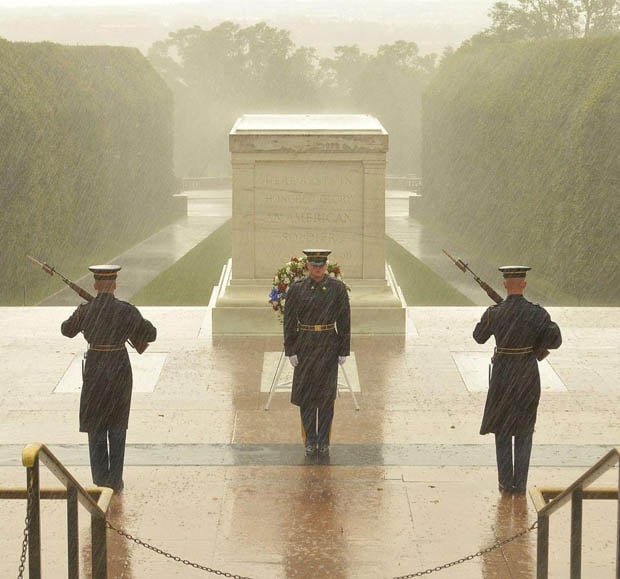 A few hours ago, the official Facebook page of the First Army Division East posted the above photograph with the caption:

Soldiers of the 3rd Inf Reg continue to stand guard at the Tomb of the Unknown Soldier, despite the worsening weather conditions surrounding Hurricane Sandy. The tomb has been guarded continuously since 1948.

News publications began picking up on the story and sharing it as part of their Hurricane Sandy coverage — sites like CNN, NPR, and FOX.

Unfortunately for those who pounced on the story, that’s not Hurricane Sandy seen in the photo. The image was actually captured last month by photographer K.L. Market during rather ordinary bad weather. The original FB photo’s description has been updated to read, “despite adverse weather conditions.” 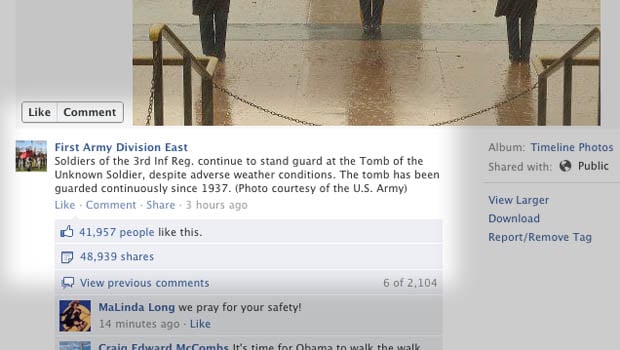 Regardless of which storm it actually shows, it’s still a beautiful and noteworthy photograph showing the dedication of those guarding the Tomb of the Unknown Soldier:

A military guard was first posted on March 25, 1926. The first 24-hour guard was posted on midnight, July 2, 1937. The Tomb of the Unknowns has been guarded continuously, 24 hours a day, 7 days a week, since that time. Inclement weather, terrorist attacks, et cetera, do not cause the watch to cease. [#]

Indeed, there are guards still attending the tomb at this very moment, even as Sandy bears down on the East Coast.

Update: You can find some photos of the Sentinels maintaining their vigil today in this Facebook album.

Image-Stabilized Version of the Canon 24-70 f/2.8L Rumored to be Floating Around