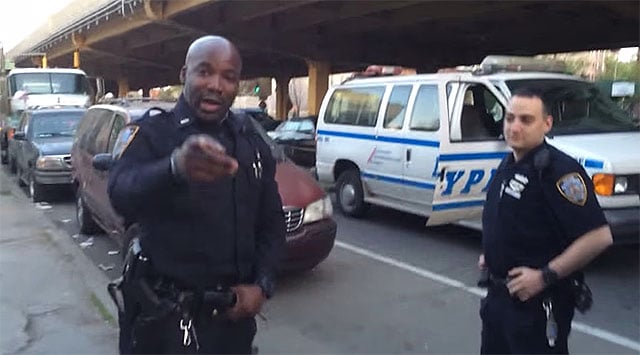 For more than a decade, Brooklyn-based professional photographer Shawn Thomas has been an outspoken activist for photographers’ rights to photograph and record in public on the streets of New York City. In the process, he has been arrested and jailed at least six times but never convicted of any crime.

This week, Thomas is making headlines again after posting a video showing how he put an end to an “unlawful search” in just 7 seconds while pointing a camera at officers.

“Shawn, whatchu got in your bag,” an officer asks Thomas.

“None of your f**king business, that’s what I have in the bag,” Thomas responds as he walks away, adding: “Honor your oath, scumbag!”

In a post on Facebook, Thomas defends his actions, saying, “I have never been rude, or ‘disrespectful’ to any police officer unless that police officer was actively engaged in acts of treason. In such cases, it is my patriotic duty to respond in such a manner.”

Less than a week after being shared on Facebook, the video has already been viewed nearly 400,000 times. From the comments and ratings, it’s clear that public sentiment is divided. While many people are praising Thomas for not giving in to an unlawful search by an officer, others are criticizing the rude and profane manner in which Thomas handled the situation — an attitude that could give photographers as a whole a bad reputation.

Another consideration is the fighting words doctrine in US law, which describes a type of speech not protected by the First Amendment’s freedom of speech. In a 1942 case titled “Chaplinsky v. New Hampshire,” the Supreme Court ruled that “a criminal conviction for causing a breach of the peace through the use of ‘fighting words’ does not violate the Free Speech guarantee of the First Amendment.”

Here’s what’s interesting: that original case was the result of a man being arrested for calling a New Hampshire town marshal a “a God-damned racketeer” and “a damned fascist.”

When Watermarking Photos Gets Taken Too Far…