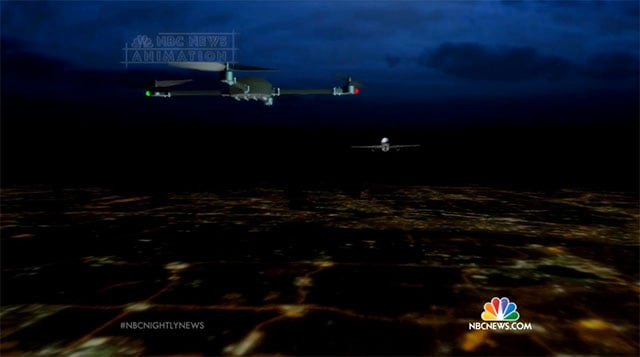 Some drone operator gave a pilot a scare this past Tuesday after flying the quadcopter way too close to an airport. A Virgin America flight reportedly came within 200 feet of the drone while landing at Dallas Love Field airport. To put that distance in perspective, consider this: the Airbus A319 airplane involved has a wingspan of about 117 feet.

The local NBC affiliate station covered the issue of bird strikes (and the danger of drone strikes) in more detail:

The pilot says the quadcopter with red and green lights rose straight up into the sky, flying above the jet as it landed below. The incident happened while the plane was about 600 feet above ground and 1.5 miles away from the airport — it’s illegal to fly drones within 5 miles of airports without clearance.

The Dallas Police Department was immediately notified, and a helicopter was sent into the sky to try and locate the drone and its owner. They were unable to locate either one.

So, a reminder: if you use a drone in your photography, make sure you keep it 5 miles from restricted airspace and under 400 feet.

The ‘Take Every Photo Gig You Can Get’ Approach