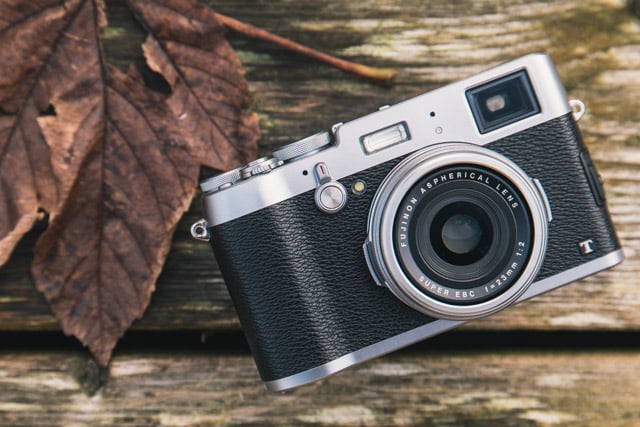 When the X100 was first released by Fujifilm the camera world popped with excitement. It was revolutionary in the eyes of many photographers. When the X100S dropped, we lauded Fujifilm shouting “Yes! They fixed so much!”.

Now with the December release of the X100T, we are tickled pink with excit… err… well… In a market now saturated with vintage-styled cameras, all of which are more than capable in every aspect, do we still care about the new Fuji offering?


At first glance of the brand new Fujifilm X100T there is nothing that is immediately apparent as being different. Even with a quick comparison of the X100T side by side to the previous generation’s X100S it can be a chore to determine which is which. And when you get right down to it, when shooting photos many may find that there’s little reason to pick the X100T over the X100S, and anyone considering upgrading will have a hard time justifying the expenditure. 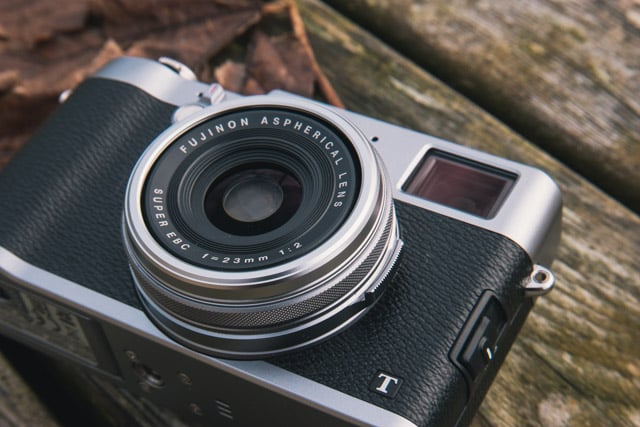 Let’s address the external features first. Aside from the new T badge on the bottom right, the differences to the physical appearance of the body are subtle. The EVF/OVF lever is different, gone is the arrow and the angular flow of the lever arm itself. The dimpled microphone port is now flat and the previously black colored Fn button is now silver. 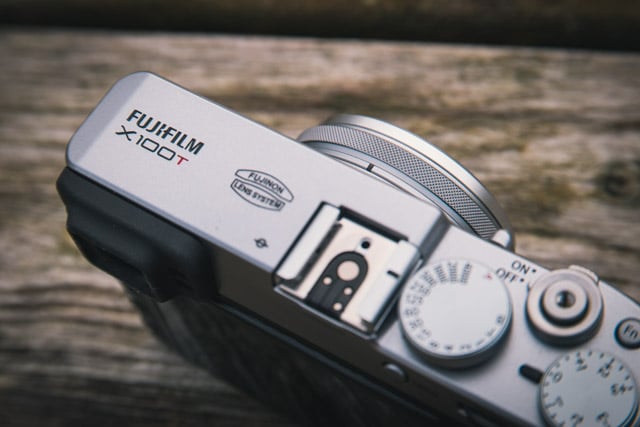 But it’s the backside where we see the largest modifications to the external aspects of the new X100T. To sum up the changes with one word it has to be “simplified”. There’s far less labeling as Fujifilm has done away with the superfluous text on the four directional pad buttons — which by the way, are actual buttons now, an upgrade over the farce of a scroll wheel that many are sure to welcome. 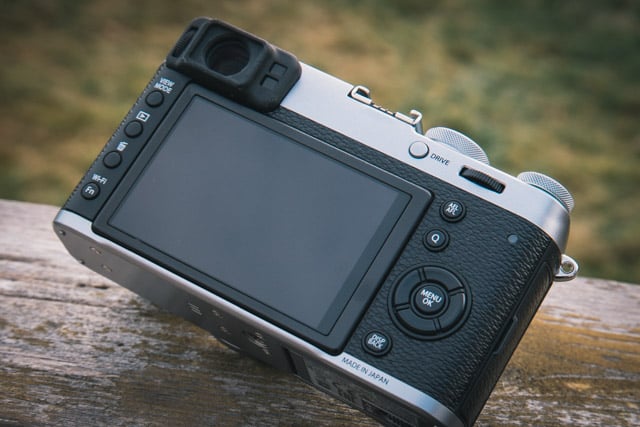 The lack of labeling is not simply to clean up the backside of the X100T. Fans of the customized button layouts will surely rejoice having gained the ability to change a grand total of 7 buttons to various abilities and functions, including the newly dedicated “Drive” button. The seventh Fn button also doubles as the “Wi-Fi” button to allow for quicker access to image uploading, remote shooting or location data via your smartphone.

As if that weren’t enough, Fujifilm has enabled USB charging on the X100T, a long desired function by many – including me. The rear rocker/selection button is now a dial, aiding in a more fluid operation of the camera. And no longer buried beneath the palm of my hand, the Q button has moved to a position that my thumb can finally reach without requiring hand-yoga. Finally the left side buttons are now circular with an improved click sensation and ample spacing between them and the LCD screen which is, by the way, now .2-inches larger.

But that’s not all they’ve done. The viewfinder itself has been damn near completely overhauled. Fujifilm is calling this an “Advanced Hybrid Viewfinder”. Here they’ve added a wonderful bit of technology to the X100T that excited me very much to test out.

All you do is push the OVF/EVF lever opposite the normal direction and up pops a little electronic screen in the bottom right corner of the optical viewfinder. This allows for rapid exposure, focus and white balance adjustments without losing the ability to shoot optically through the viewfinder. 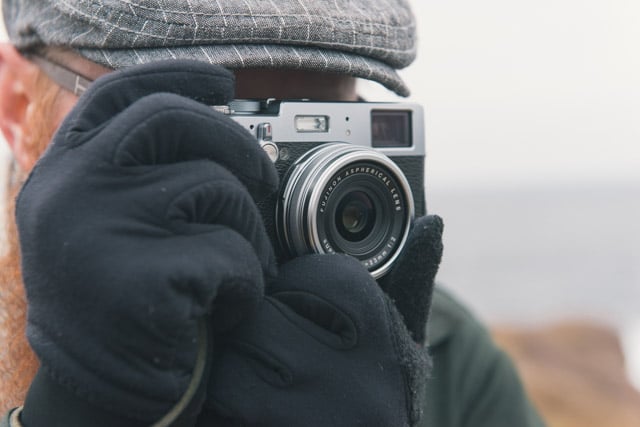 Admittedly this took a little getting used to. The X100T’s EVF itself has graduated to a point where this holdout for the good ole’ days of optical-only viewfinders felt more than comfortable with a digital-only view. But now having real time parallax and the EVF preview box gave me the best of both worlds. After a week of dedicated use I became quite accustomed to peeping at the bottom right corner on every shot, blissfully using the optical viewfinder while still having the live digital confirmation.

Moving on to the internals of software and hardware, a lot has changed here too. The list is long so here we go. Fujifilm has introduced: face detection, ISO range of 100 to 51200, interval timer shooting, electronic shutter up to 1/3200sec, Wi-Fi for remote capture or sharing and location services, the Q menu can now be customized, the viewfinder’s info display now adjust for vertical or horizontal, there’s a new film simulation dubbed “Classic Chrome”, multi and variable target AF and dynamic range in live view.

All of this to go along with the beautiful 16.3mp APS-C X-Trans CMOS II sensor you all know and love. Oh and they’ve added third stops to the aperture as well. Huzzah!

With that said let’s turn our attention to the act of actually taking and making a picture, this is after all, a camera.

As I mentioned a moment ago, the real time parallax feature that has been added to the optical viewfinder is a blessing. In moments of haste I cannot count how frequently I’d chopped the dome off of a subject by misjudging exactly where the framing was. Finally I can see my actual frame, real time in the VF without needing to re-frame the picture after grabbing focus. This feature alone is enough of a selling point for me and it will not only ensure I don’t screw up but also speeds up my whole process and removes one more to-do on my mental checklist when taking a picture.

Fujifilm is clearly determined to make this camera better as time goes on and not simply rest on their laurels. The grip is as subtle and functional as ever and didn’t bother me switching between a full size DSLR and the X100T. It sits in my average sized hand just right. There just isn’t any other way to put it. And should you feel it is too small there is an attachment to pad that grip into your monster sized hands.

In standard use, aside from the newly introduced pep that the X100T has over the previous iterations, I find it hard to discern between the full line of this series. Yes the X100T felt snappier and a lot of the new aspects were wonderful but I just don’t know if the X100T offers enough benefits to tempt me to trade in a X100S for the new T variation. 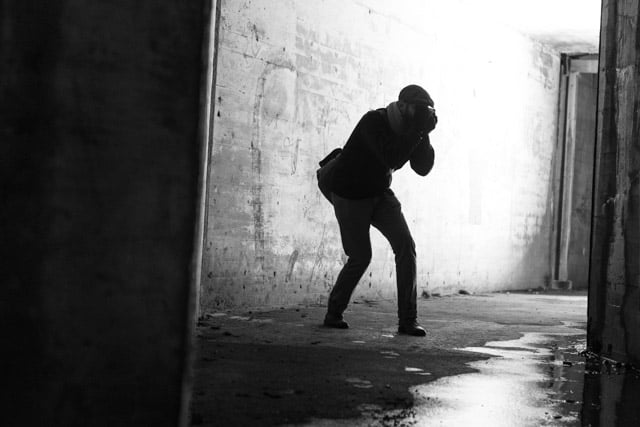 Yes, yes the added features list is long, in fact so long I’m no doubt forgetting something here in this review. If I had an X100 or X100S I would have to closely consider the financial details of the trade up and really give pause to whether or not the new features are worth the cost.

As it stands I do not actually have an X100 camera. As tax season approaches with the prospects of a tax return, I’m left asking myself the other question: do I opt to save a few dollars by going with an older X100/S thereby missing out on all of the X100T’s new features?

No. Not at all. Even if you do not use half the newly added attributes of the X100T, you’re still going to benefit long term from the key ingredients —  third stops, real time parallax, 7 custom buttons and the embedded EVF pane inside the optical viewfinder. All of these will benefit me in taking better photos, making all the other doodads such as Wi-Fi and USB charging the cherry on top of this delicious cake.

If you have the original X100, you buy. Now is the time to upgrade. You’ll get all of the features the S version brought plus a boat load more.

If you have an X100S I have to say no, unless you manage to score fantastic resale value on your S OR manage to find a used X100T that is in near mint condition.