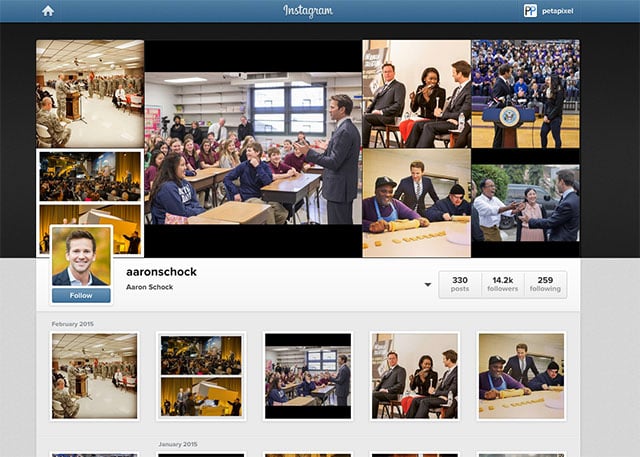 Illinois representative Aaron Schock is facing serious scrutiny over accusations that he has been misusing taxpayer money for expensive travel and entertainment. His downfall came in the form of Instagram photos: the EXIF data gave him away.

The report comes from The Associated Press, which dug deep into the congressman’s records and activity in order to uncover the truth about his spending habits.

Schock took more than one dozen flights above donors’ planes, travel worth more than $40,000, since the mid-2011s, the AP found. It was through examining the EXIF data of Schock’s Instagram photos that these details were uncovered.

The AP tracked Schock’s reliance on the aircraft partly through the congressman’s penchant for uploading pictures and videos of himself to his Instagram account. The AP extracted location data associated with each image then correlated it with flight records showing airport stopovers and expenses later billed for air travel against Schock’s office and campaign records.

Instagram photos were also used to prove that Schock spent thousands of dollars on things like music concerts.

Beyond air travel, Schock spent thousands more on tickets for concerts, car mileage reimbursements — among the highest in Congress — and took his interns to a sold-out Katy Perry concert in Washington last June […]

“You can’t say no when your boss invites you. Danced my butt off,” one former intern posted on his Instagram account with a picture of Perry at her June 2014 show. PAC records show a $1,928 expense for the ticket service StubHub.com two months later, listing it only as a “PAC fundraising event.”

Schock is known for living a lavish lifestyle. Earlier this month he faced criticism for decorating his congressional office in the style of the popular show Downton Abbey.

Here are some photographs found on Schock’s Instagram page (it’s unclear which photos the AP picked out in its report, or whether those photos are still public):

We’ve shared multiple stories in the past in which people were busted after sharing their illegal activities on Instagram. Now the same kind of over-sharing of photos has put a serious black mark on the reputation of a “rising star” in the GOP. We’re guessing Schock wishes now that he had scrubbed the EXIF data in his photos prior to posting them.

(via AP via Engadget)