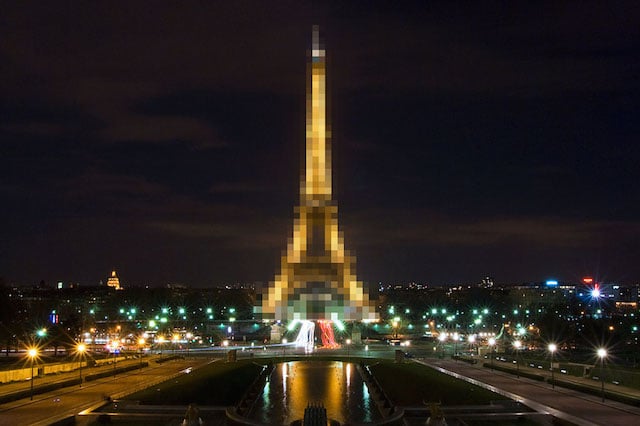 According to an oft-forgotten clause in EU copyright laws, it is illegal to publish nighttime photos of certain public buildings in certain countries without asking permission from the owners of the buildings.

So why isn’t everyone who captures and posts images of iconic building such as France’s Eiffel Tower prosecuted then? Because the clause and accompanying law are rather vague, only accepted by certain states, and all-round confusing to interpret.

Certain buildings also have their own rules in place, such as the rules the Eiffel Tower website lays out, which state:

Daytime views from the Eiffel Tower are rights-free.

However, its various illuminations are subject to author’s rights as well as brand rights. Usage of these images is subject to prior request from the “Société d’Exploitation de la Tour Eiffel” (the Eiffel Tower’s operating company, or SETE).

Another example is the architecture of the European Parliament. The buildings’ copyrights are not held by the parliament, but by a French architecture bureau that only allows for news photos. EUobserver reports that Wikipedia recently had trouble using a photo of the Strasbourg assembly building due to this issue, despite getting written permission from parliament.

These EU laws and clauses have caused a great deal of confusion; enough to entice EU lawmakers to do something about it. In fact, in 2001 the EU implemented a law that says photos of architectural projects in public areas can be taken free of charge. However, the problem with this particular law is that it’s opt-in, not mandatory — so building owners tend to avoid following it.

Laws written well before the advent of smartphones and other image-capturing devices are necessarily outdated now, but even before smartphones, all those disposable camera shots of the Eiffel Tower lit up that you took on your trip to Paris way back? You better not publish those…

Image credits: Photo Illustration based on Eiffel Tower at Trocadéro by Sathish J

To Aspiring Professional Photographers: What If The Problem Is That You Suck?