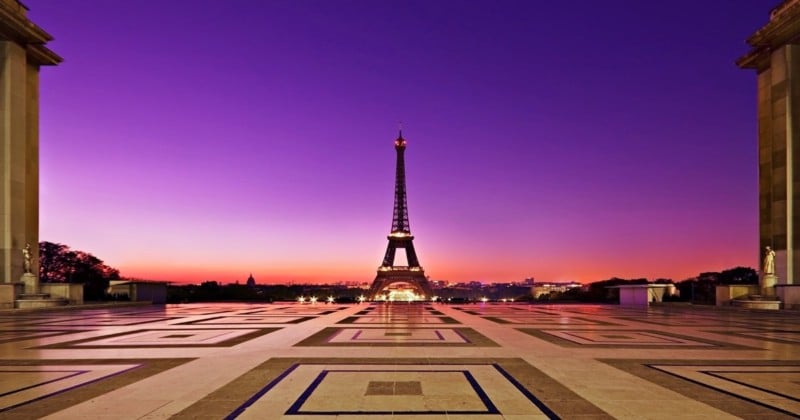 Today, we know the Eiffel Tower as the much beloved symbol of Paris. It wasn’t always like this though. In fact, many Parisians were not too fond of their new landmark back in 1889 and many of them wanted it taken down.

Even before its construction, a group of eminent French authors and artists published a public letter in which they proclaimed the following:

We, writers, painters, sculptors, architects and passionate devotees of the untouched beauty of Paris, protest with all our strength, with all our indignation in the name of slighted French taste, against the erection … of this useless and monstrous Eiffel Tower … And for 20 years … we shall see stretching like a blot of ink the hateful shadow of the hateful column of bolted sheet metal.

Wow! Tell us what you really think guys. I think it’s safe to say that they weren’t too impressed. The writer, Guy de Maupassant is said to have eaten in a restaurant in the tower everyday as it was the one place in the city from which the tower was not visible!

With such a rocky start, it is all the more impressive that the tower is not only still standing, but is one of the most visited landmarks in the world, with almost 7m visitors per year! In fact, it would be hard to imagine Paris without the Eiffel Tower today. And so, on a cool Autumn morning, I set off to photograph this iconic tower (or hateful column depending on how you see it).

The Palais de Chaillot is an austere structure consisting of two separate buildings on a hill overlooking the Eiffel Tower. The current rather dour building replaced a much more flamboyant palace in 1937. Despite the quite unappealing architecture of the new palace, the space between the two wings, provides a superb viewing point over the Eiffel Tower on the far bank of the River Seine. It was from here that Adolf Hitler viewed the tower when he visited an occupied Paris in 1940. The crafty Parisians however had already cut the cables of the lift to the top of the tower and prevented history’s greatest monster from reaching the top.

I arrived with much more benign intentions on a cool October morning at 6am. I love photographing cities early in the morning. Not only is the light often very beautiful but usually crowded locations are often completely empty. This was almost the case on this particular morning. The giant esplanade between the buildings was completely deserted except for one very drunk Parisian who kept wandering into the frame every so often much to my annoyance.

The sun hadn’t risen yet the sky was an interesting mix of pinks and purples. I set up a symmetrical shot from the back of the square using the pattern on the ground as leading lines. It’s a very simple composition but I think it works well. The buildings on either side also ‘frame’ the scene’ nicely. You can read more about these compositional techniques in my Guide to Composition.

My unsteady friend had now taken up permanent residence in the centre of the square so it was time to move off to the side and get some shots with the golden statues that line the esplanade. I will say this though: even Parisian drunks are a class above the rest of the world. I’m used to seeing drunks drinking cheap cider from a plastic bottle. This guy however, was drinking a bottle of 1997 Chateauneuf du Pape!

It’s very hard to take an original photo of a famous landmark. The Eiffel Tower is no exception. I decided to try something a bit different for this shot by focusing in on the bottom half of the tower and cutting off the top half entirely. I set up the frame with two of the statues on the right looking in towards the Eiffel Tower. Unlike the first shot, I stood back and zoomed in to 70mm in order to compress the perspective and make the Eiffel Tower seem closer. If you look under the arch of the tower, you can see the lamppost lined Champ de Mars leading up to the Military School that counts Napoleon himself as an alumnus.

I once again had to move on as my drinking buddy had now started to chat up one of the statues and I didn’t really want to cramp his style. I’d like to think he was successful. He was certainly trying very hard as he regaled Goldie with his tales of bravado.

For my final shot of the morning, I again focused on the bottom section of the Eiffel Tower but included the Pont d’Iena as well. A long exposure of 8 seconds allowed me to capture the light trails of the early morning traffic as it crossed the bridge.

I was getting hungry now and decided to head for breakfast in one of the numerous cafés Paris is renowned for. As I sat eating my croissant and drinking a hot chocolate, I wondered if my discerning wine drinking companion friend back at the Palais de Chaillot was having any luck in his en-devours to impress the golden statue he had taken a shine to. You gotta love a trier.

The final photo in this series was actually taken several years earlier on a trip to the city of light with my wife. The Eiffel Tower is a pretty terrible place to view Paris from. After all you can’t see the most famous structure in Paris when you’re up there….. The Eiffel Tower itself. A much better option is the Montparnasse Tower in the 15th Arrondissement. For €15, you can take a lift to the 56th floor and enjoy a panoramic view of the City of Light. Two more flights of stairs will then bring you to the roof itself.

Now to be perfectly honest, the Montparnasse Tower is one ugly building. Frankly, the architect should have been made stand outside it in his underpants every day for the rest of his life for putting up such a monstrosity in the heart of Paris. Thankfully, when you are up there, you can’t see it. It’s roof however, provides a unparalleled view of the much more attractive Eiffel Tower.

I’ve been up the Montparnasse Tower a few times now. I love going there about an hour before sunset and watching as the sun sets over the city and the night lights come to life. The photo above was taken not long after sunset when the sky had turned a very striking shade of purple which contrasted nicely with the city lights below. Even at this height, the Eiffel Tower dominates the city.

After getting my shots in the bag, I like to go to the cafe below the viewing deck and sip a glass of wine (Chateuneuf du Pape of course) and just take in the magnificence of the ‘City of Light’ below. I highly recommend it.

About the author: Barry O Carroll is a Dublin, Ireland-based photographer specializing in landscape photography with a particular emphasis on urban landscapes, street scenes and architecture photography. You can find more of his work on his website or by following him on Facebook and Twitter. This article was also published here.