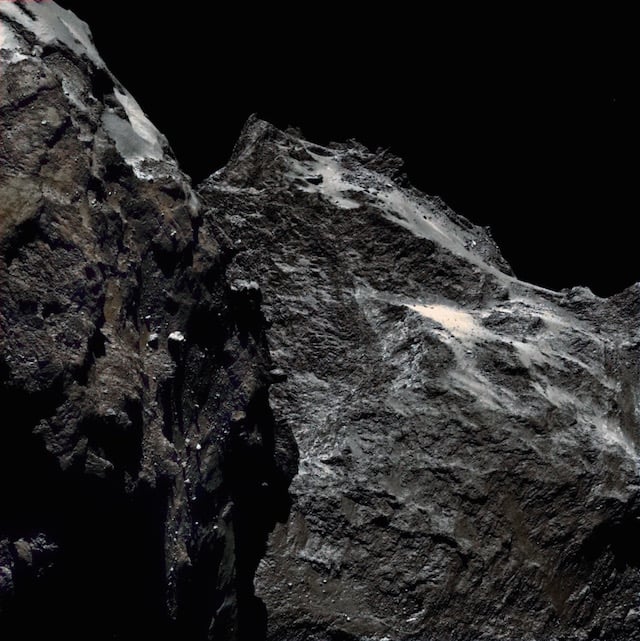 On September 5th of this year, the OSIRIS imaging system aboard the European Space Agency’s Rosetta Orbiter snapped one of the closest looks at a comet that we’ve ever seen. Roughly 38.5 miles from the surface of Comet 67P, the photograph captured an incredible amount of detail, even showing the boulders on the surface of the comet.

After the original black and white image was published though, Flickr user 2di7 & titanio44 decided to bring the image to life even more by using obtainable information about Comet 67P to colorize it to the best of his or her ability. You can see the resulting image above.

Flickr user 2di7 & titanio44 explained in a comment below the colorized image that this was indeed a simulated colored image, rather than an actual color image created from RAW data, which can sometimes be drawn from multiple images captured using different filters:

We started with a single image, working on the information that we all know (low albedo, dusty surface, and so on), obtaining three virtual layers. Processing, as long as even our eyes were pleased and believed what they was looking at.

Even though the original image was amazing in its own right, something about adding color to it just solidifies the reality of this hulking piece of rock and metal. As for how detailed the image itself is, the ESA said the very pixel on the original photo translates to approximately 1.1 square meters (3.6 feet).