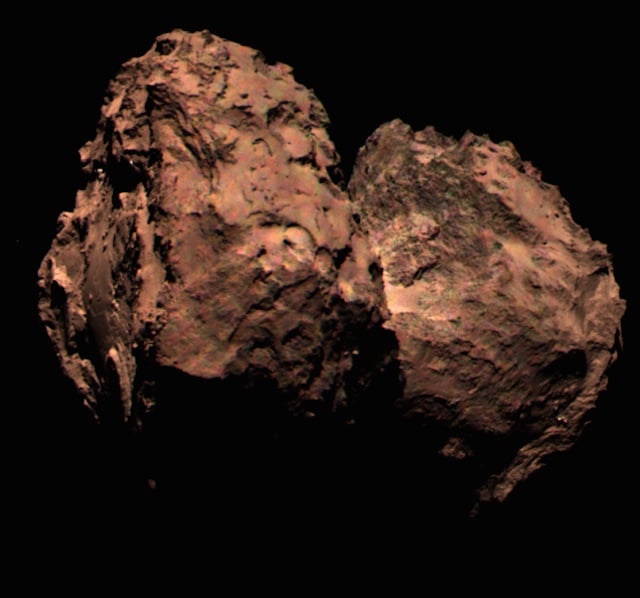 Given Comet 67P is, after all, a rock, and given that gray rocks are not uncommon, you would be forgiven for thinking that the photos of the comet that we’ve seen thus far were in color. That, however, is not the case. What you’re seeing above is actually the first true color image of Comet 67P taken by the ESA’s Rosetta spacecraft.

Part of a new research paper, the photo was captured by Rosetta’s OSIRIS Narrow Angle Camera in a similar way as the very first color photograph — meaning it’s actually a combination of three exposures: one taken with a red filter, one with a green filter, and one with a blue filter. Those three images are then superimposed to create a true color image.

This also explains why the image is a bit blurry. As the GIF below by Reddit user Hexorg shows, the comet and Rosetta both were moving between the R, G and B exposures:

Nothing a little bit of Photoshop won’t fix though. Redditor IG-64 followed up Hexorg’s channel splitting GIF by color correcting and sharpening the final shot to produce this: If you want to see more of the comet, the paper’s author’s reveal that they will be releasing a higher-res image of 67P on December 18th, so keep an eye out for that.

6 Types of Photos Every Photographer Should Know How to Make