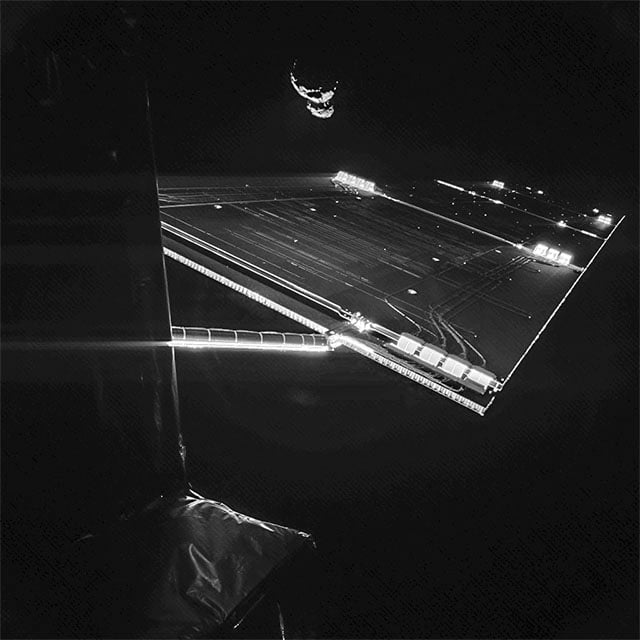 Here’s an amazing “selfie” photograph that’s literally out of this world. It was captured a couple of days ago by the Rosetta mission, which is studying a comet over 250 million miles away from Earth on behalf of the European Space Agency (ESA).

The ESA calls the photograph a “selfie at comet,” and says that the shot was captured using a camera found on Rosetta’s Philae lander (a separate robotic spacecraft that will be landing on the surface of the comet in November 2014).

Scientists captured the image to test the lander’s equipment before it becomes the first lander to sit on the surface of a comet. Once on the comet, the lander’s cameras will be used to create 360-degree panoramas of the comet’s surface.

In the foreground of the photo we see the side of Rosetta and one of the spacecrafts 46-ft-long (14m) “solar wings.” The comet, named 67P/Churyumov–Gerasimenko, shows up in the background of the selfie at a distance of just 31 miles (50km).

Two different exposures were stacked in order to create the photo, since the scene had a very high contrast of light and dark.

The Rosetta mission has so far been quite successful at giving us a closer photographic look at what the comet is like. Here’s an image we previously had of the comet using powerful telescopes based here on Earth: …and here’s the amazingly up-close view we now have thanks to Rosetta’s onboard cameras: The image was captured after Rosetta traveled 4 billion miles to reach the comet. Now that’s a grueling photo assignment…