Just over a week ago we featured Matt Granger’s review of ZEISS’ recently-announced Otus 85mm f/1.4, and today he’s back with a quick review and comparison test of Nikon’s newest full-frame camera: the D750.

Located between the D610 and D810 in Nikon’s DLSR lineup, Granger reviews the D750 in comparison to its more and less affordable brethren to help put its capabilities in context.

And perhaps the most intriguing piece of the review is the comparison images that put the trio’s high ISO capabilities side-by-side-by-side (click on the image to see higher res): 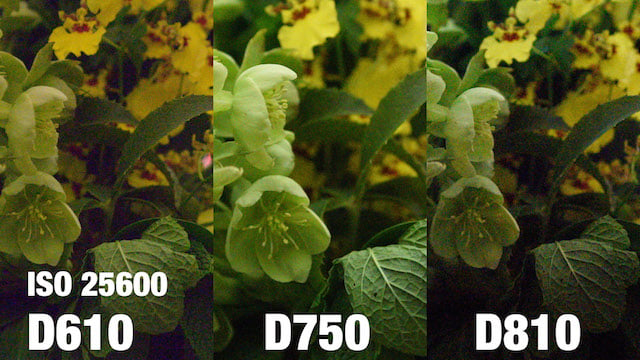 As Granger’s comparison shows, the D750’s sensor is a big improvement, pushing out far less noise at high ISOs than the D610 and D810 both.

Pair that with its purported ability to lock focus on subjects in extremely low light, its vari-angle LCD and the fact that video capabilities match the D810 and you have a good case for ditching the extra pixels, saving some money, and getting the D750 instead.

To check out Granger’s full review, including all of the full-resolution comparison images from ISO 1600 on up, click here. And if you’d like to subscribe to his YouTube Channel, you can do so here.

Image credits: Photograph by Matt Granger and used with permission