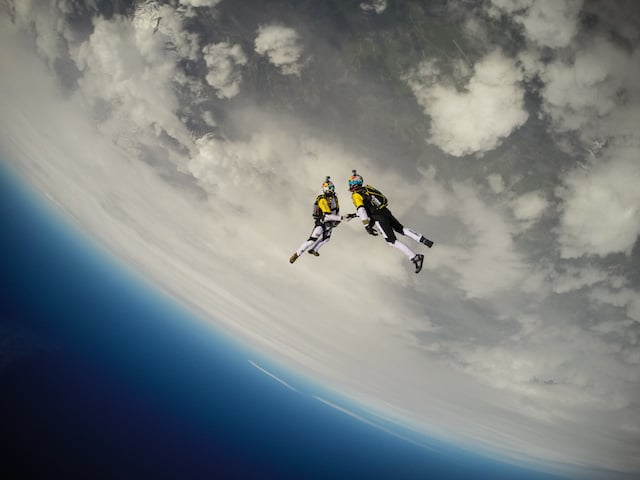 How in the world do you capture a photograph like the one above? Or any of the ones below for that matter? How do you deal with temperatures that run in the negative 50s Celsius, at an altitude where any real camera would likely mean breaking your skydiving videographer’s neck, and still deliver great shots of an incredible feat of skydiving?

Well, it took a year and a half of preparation and the challenges were seemingly never-ending, but photographer Dom Daher figured it out, and he was kind enough to share his photos and some of what he learned with us.

These photos came from a Red Bull jump over Mt. Blanc dubbed “The Ultimate Skydiving Combo,” and it might surprise you to learn that the mid-air shots from the main jump are stills taken by a GoPro in time-lapse mode. This, Daher told us, was not ideal…

“I was not happy about it,” he explained over email. “I typically work with the best gear (3D, 1DX, Z645) because while it’s not the brush which make the painter, Picasso didn’t paint with his finger either.” But this was the only option that was light enough for videographer Noah Banson’s neck. They were jumping from 33,000 ft as opposed to a more reasonable 12,000… the air is thinner, they’re falling faster, and the opening of the canopy stronger.

Daher’s ultimate solution — after testing and ruling out a RED, 5D Mark III and GH4 — was to strap two GoPros on Banson’s helmet, one in horizontal and one in vertical orientation, and hope for the best.

As [Noah] was filming as well it was impossible to ask him to frame in a way I like, so I oriented the GoPro to have my subjects in a third of the frame, without forgetting that he is jumping mostly upside down…

I also put GoPros on the jumpers facing each other and facing at their own face to have the goggles and the O2 mask in the frame and the rest of the scene in the reflection. All together it was 5 GoPros. I set up all the cameras in time-lapse mode, taking a picture every half second.

This meant that he ended up with some 20,000 pictures between the 5 low-altitude test jumps and the 6th ‘DDay’ jump, not including the photos he took inside the plane and before hand on the ground. 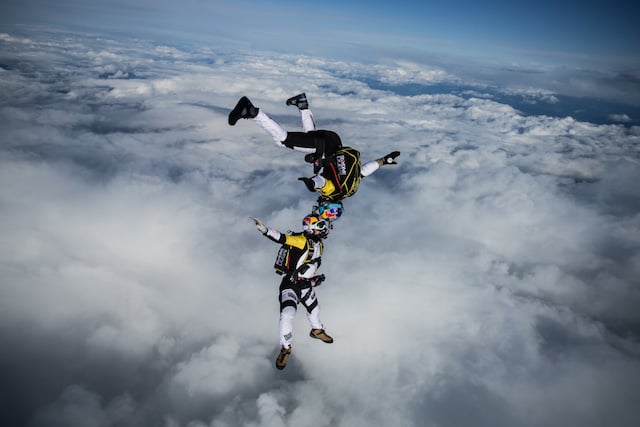 And as if the issues above weren’t enough, the window for the jump was tiny and photographically miserable. The jump HAD to happen on one of two weekends between 3:00pm and 3:10pm… in the summer… ~10,000m above a mountain.

That’s the moment of the day where the wind is the strongest and, due to the warmth, when the clouds are growing the most. Before or after would have been a way better. Photography and light wise you can’t expect something worst… strong light and low contrast.

To his credit, Daher pulled it off, capturing some truly stunning images in the process. Here’s a selection of behind-the-scenes images by Daher, as well as some of the better shots pulled from the GoPros he set up: 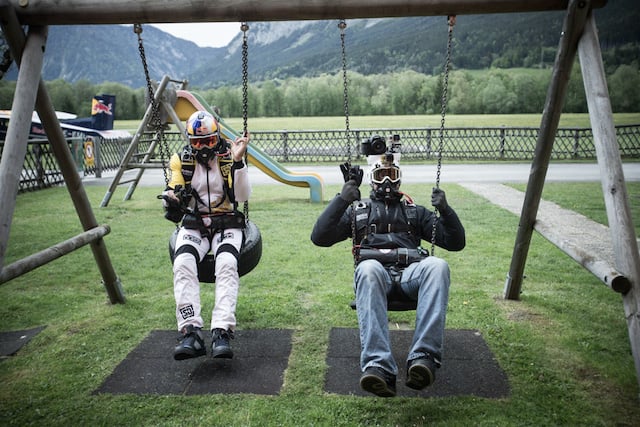 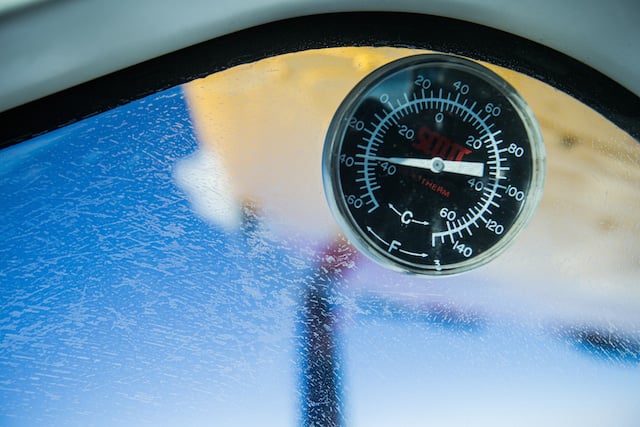 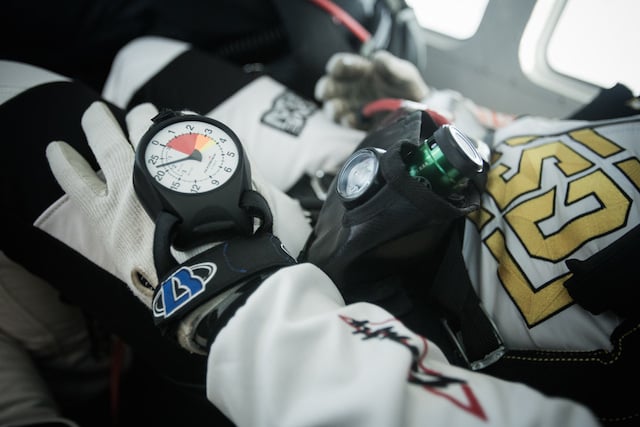 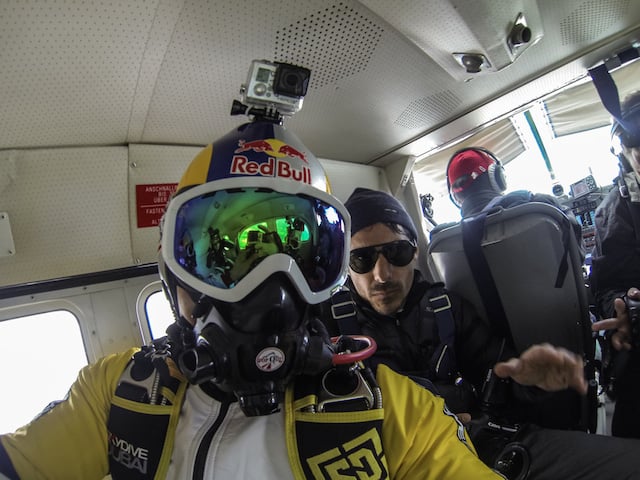 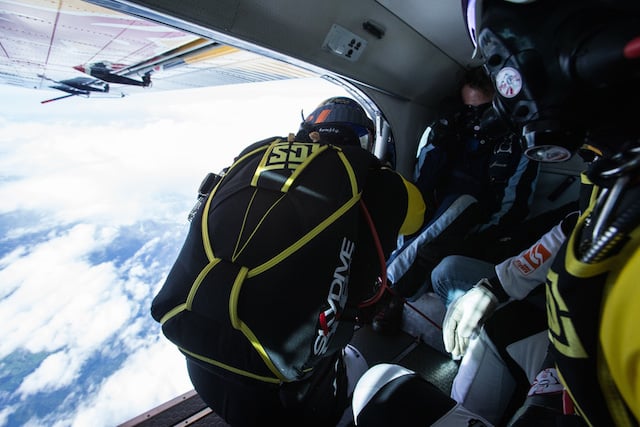 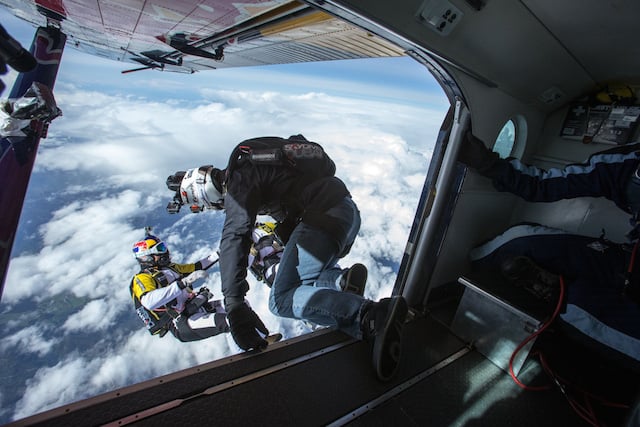 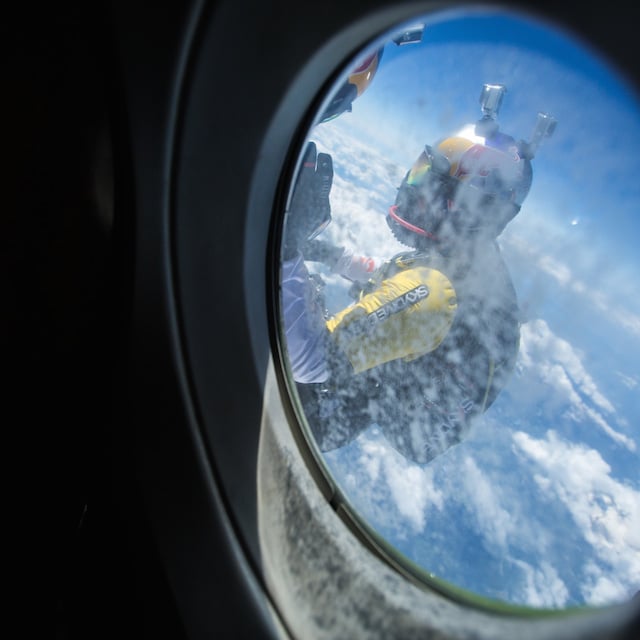 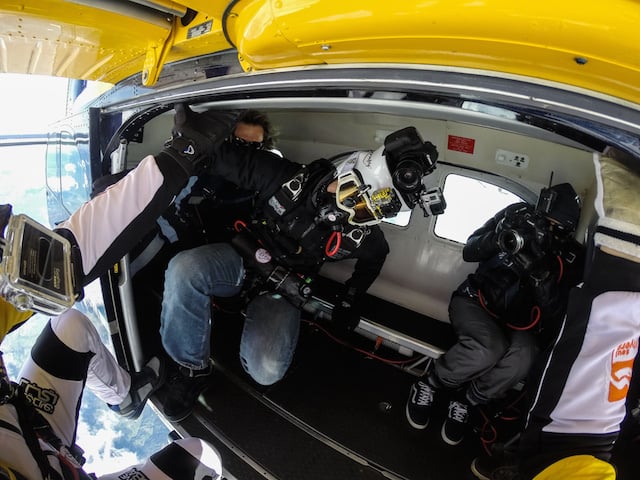 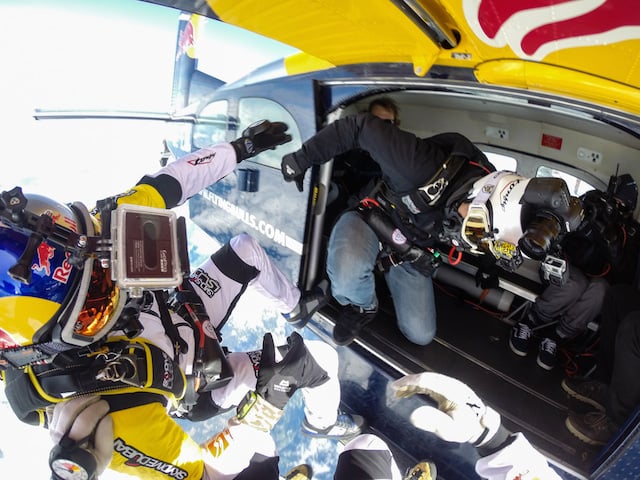 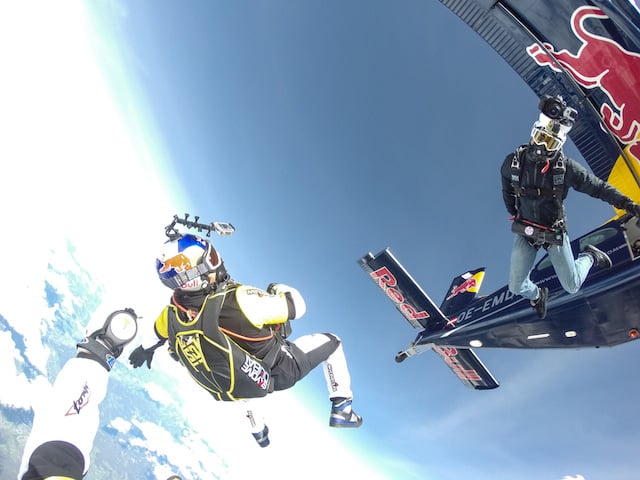 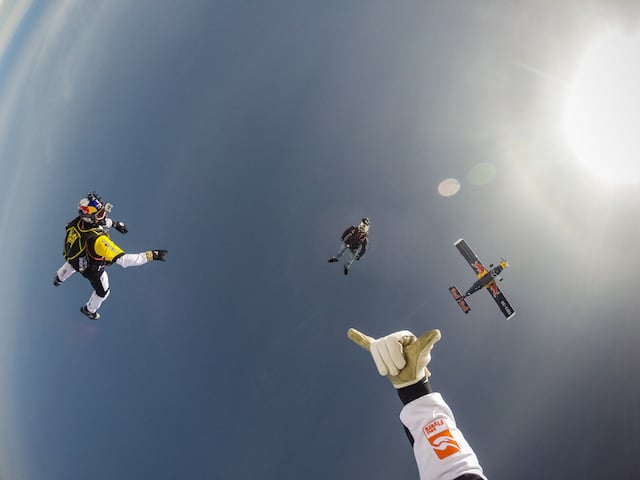 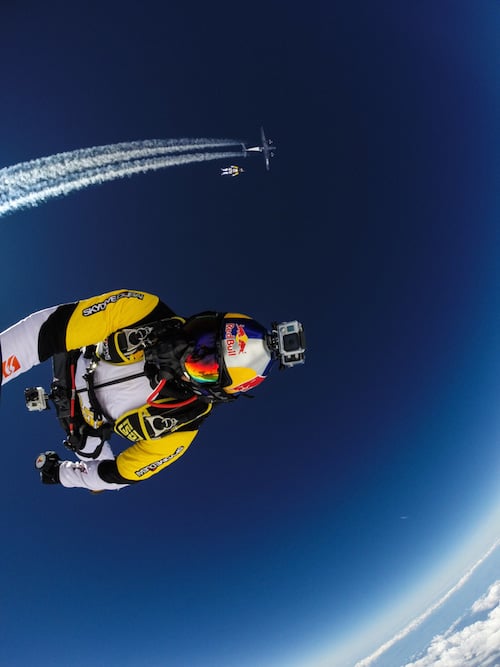 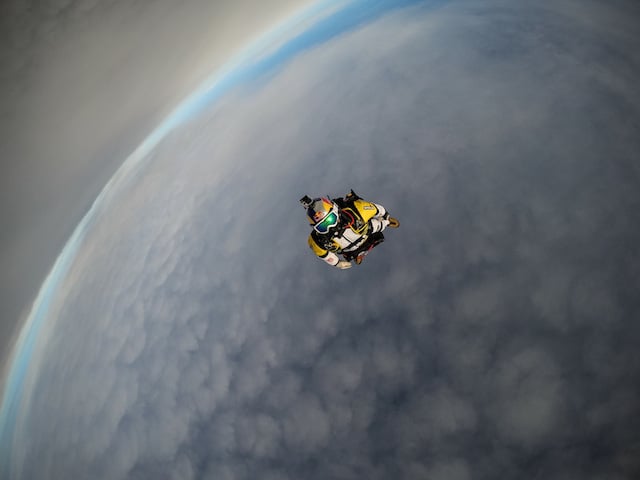 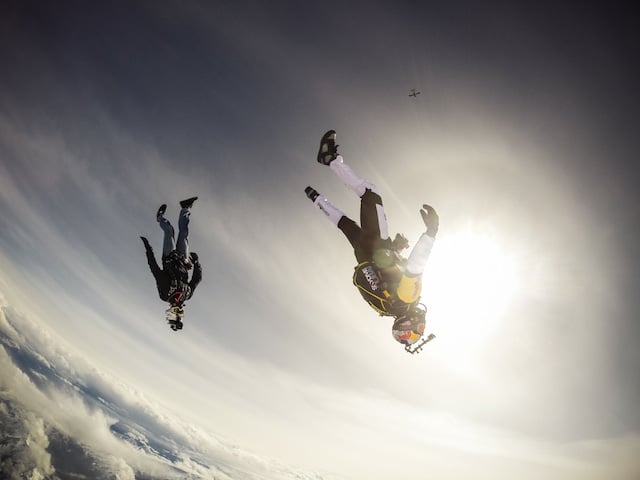 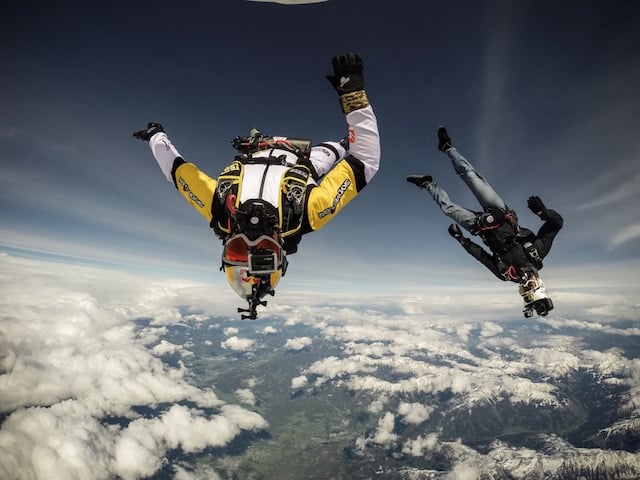 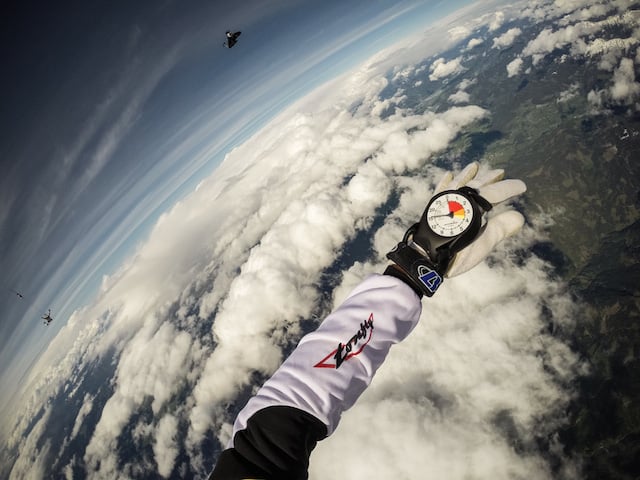 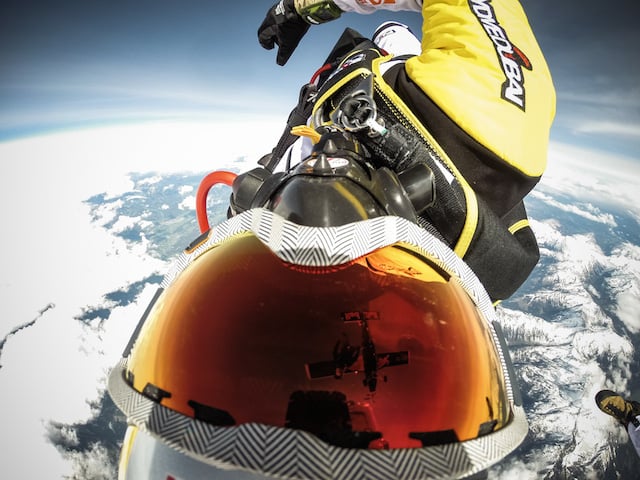 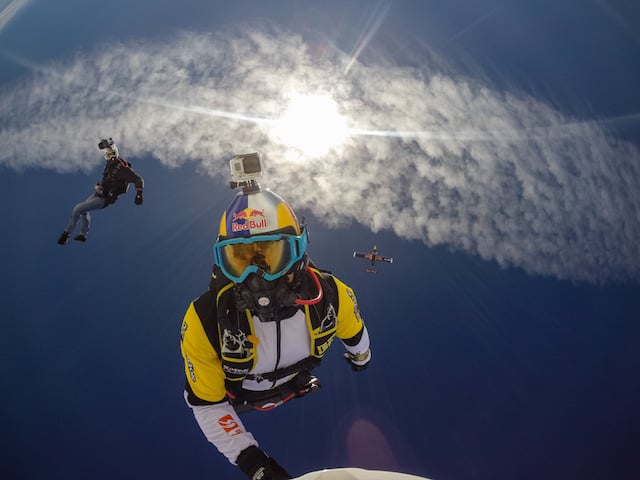 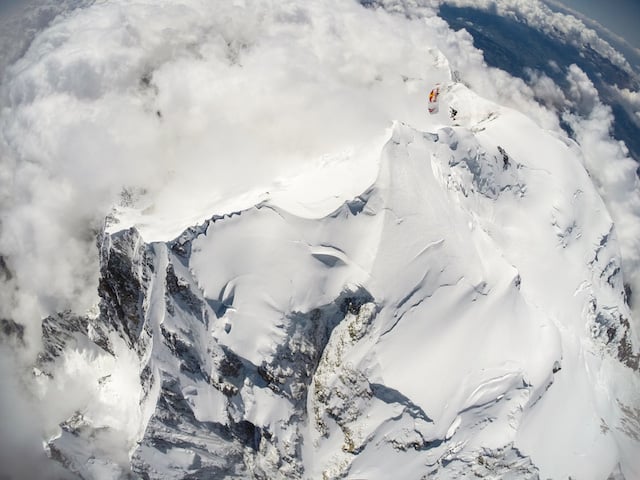 And then, of course, the group shot. But not even that one would cooperate. “Of course,” Daher tells us, “it started raining like hell and it make it one of the hardest portrait I’ve ever done.” Go figure. 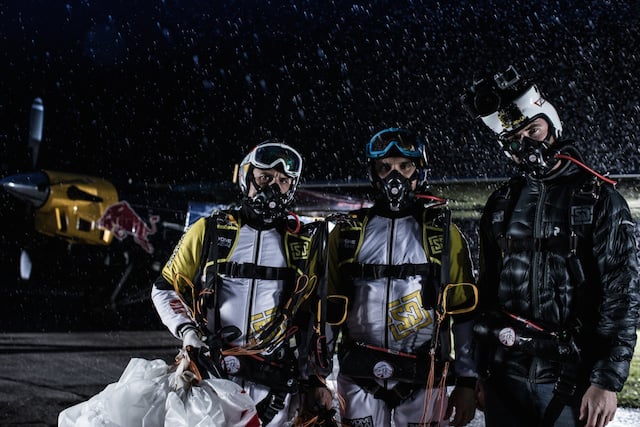 Finally, here’s the video Red Bull put together from the jump:

To see more behind the scenes photos and pictures from the jump, or if you’d like to check out some of Daher’s other work, pay the Ultimate Skydiving Combo page a visit, check out Daher’s website and blog, or give him a follow on Twitter.

Image credits: Photographs by Dominique Daher and used with permission