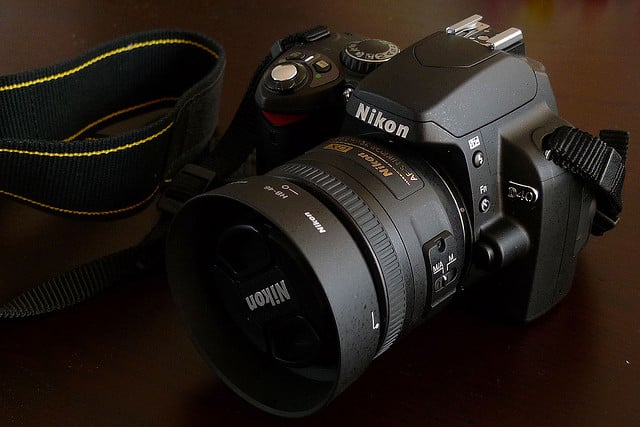 Want to make some great photos but don’t have or don’t want to spend a lot of money? A few days ago I posted photo of a Hummingbird on my Facebook page I took with a new Nikon D810 and a 85mm 1.8. I received a comment asking me “how much money do you spend on your equipment to get a shot like this?” Others comment from time to time that they’d love to get into photography but don’t have the money.

So, I thought, how close can I come to some of the shots I get with my Nikon D600 and the D810 with a really cheap used DSLR? The personal challenge began.

Ebay has about 4500 Nikon D40’s and about 7000 Nikon 18–55’s listed. There are so many listed that the prices are really low. If you search a bit and you bid at the right time, you can get some really nice cheap equipment. I also started thinking about a good “do most everything” lens. A lens that could take some really nice portraits, macros, has some length on it, with really nice bokeh, fast (f/2.8), and cheap.

I opted for the Tamron 90mm macro. I’m sure there are other choices that some would consider better, but I went with this to fit my needs. Because the Tamron is a full frame lens, it has an equivalent focal length on the Nikon D40 of 135mm. Shopping was completed with a used Yongnou Strobe and a few other items.

In contrast, my setup for the Nikon D810 is about $7000+ with lenses, strobes, and just what I normally shoot with. I specifically picked up all of the above items so I could compare some of my favorite types of photography: Macro, Portraits and Long Exposures. I also wanted to limited myself to two lenses for the D40. I shot all photos on Auto White Balance. I tried to use similar focal lengths where I could. Finally, I broke down the cost for each shot and included the shot details.

Keep in mind this is not a direct side-by-side comparison of a Nikon D810 and a Nikon D40. I’m just interested in making really a few great photos with used, old equipment VS a new modern brand new DSLR. Lets get into it. (Note: To see the comparisons in high-res, click on each photo).

I adjusted color on the D40 to bring the blue out in the night sky. When I setup long exposures with the D810, the Samyang has a hard stop to infinity. So its easy to focus to infinity. The Nikon 18–55 does not. I had to focus on the Moon or something else far away and was amazed at that the Nikon D40 with the 18–55 did this so easily in the dark. After the D40 was focused to infinity, I set the auto focus switch on the side of the lens to off. Both shot on M mode or manual.

I added just a bit of noise reduction on the D40 photo in Photoshop. Otherwise the photos are pretty much straight out of the camera. Both shot on M mode or manual.

These photos look virtually identical to me. I shot both on Aperture Priority at f/10 to increase the depth of field. I adjusted the saturation on the D40 photo a bit because I shot it on the vivid color setting and wanted it to match the color of the D810 a bit more. I also cropped both photos quite a bit to fill the frame with the flower. Of course the D810 did produce a lot more detail when zoomed in very close. However, the D40 photo clarity and detail is pretty impressive.

I used an Alien Bee B800 (maybe 1/16th power) with the 8″ reflector on a light stand and Pixel King wireless triggers on the D810. I used the Yongnuo YN–560 flash (maybe 1/4th or 1/2 power) with the white shoot through umbrella and the Cowboy Studio wireless triggers on the D40. On the D40 photo I reduced the saturation and adjusted light. On the D810 photo I adjusted contrast and light. I cropped both photos to fill the frame with the model. Both shot on M mode or manual. I shot the D810 photo at 200mm and the D40 at 90mm – 135mm equivalent.

I brought both photos into Photoshop and adjusted light, contrast and warmth. 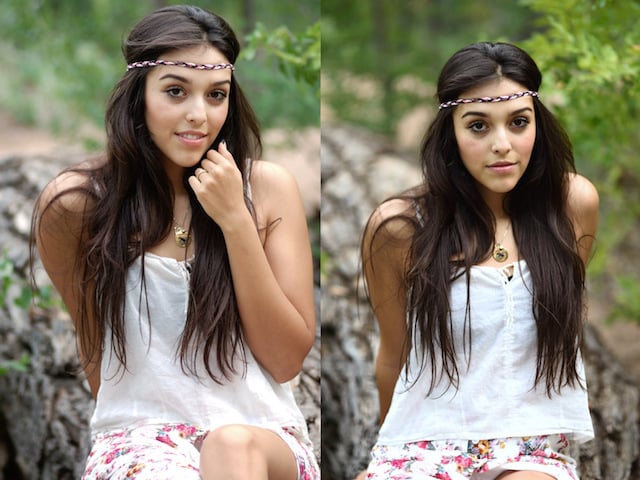 I brought both photos into Photoshop and adjusted light, contrast and warmth.

I brought both photos into Photoshop, adjusted contrast, reduced noise and adjusted color. But not much – very little. Both are shot with the same focal length with respect to the sensor size. I pre-focused to infinity and turned off auto focus. I shot both at f/22 to slow the shutter which gives me a better chance at capturing the lightning. Both cams were on a tripod and I just kept hitting the shutter button. I took about 75 photos before both cams captured the same bolt.

The only editing I did was some noise reduction on the D40 shot using Photoshop. I shot the D40 photo with a bit more daylight then with the D810 photo.

That’s it! What do you think? Is this a commentary on “the camera doesn’t matter?” No, not really. The take away is you can make some amazing photos in most any situation without spending a lot of money – if you stay at ISO400 or below. The D40 becomes really noisy at ISO800 and above. So its not really good for handheld low light photography. Finally, after all this shooting, editing, and looking and photos from both cams I realized its not about the money or equipment, its about getting out. It takes a lot of time to hike, drive setup, etc to take photos. I think that’s where the challenge is. Just getting out and/or finding the time. Hope you guys enjoyed.

About the author: Brian Spencer is a hobbyist/amateur photographer living in the southwestern United States. He doesn’t consider himself a pro, but he enjoys traveling and capturing all the beauty that is people, landscape, animals and anything that is visually stimulating. You can find more of his work on his blog, or by following him on Facebook, Flickr, or 500px.