You know what they say: see a need, fill a need. Or, in the case of Sony’s upcoming perfume bottle-shaped selfie camera, “see a fad, create a product.” We assume that’s written somewhere in the internal memo that first gave life to the camera you see above, a seemingly very real and definitely very strange camera that trusted sources tell Sony Alpha Rumors will be one of the first to feature Sony’s revolutionary curved sensor.

This is where the details get hazy. Earlier this week, SAR made mention of a ‘strange’ new compact camera from Sony that would be called the KW1. This, by all accounts, ought to be it; however, it’s still being mentioned as a separate entity. 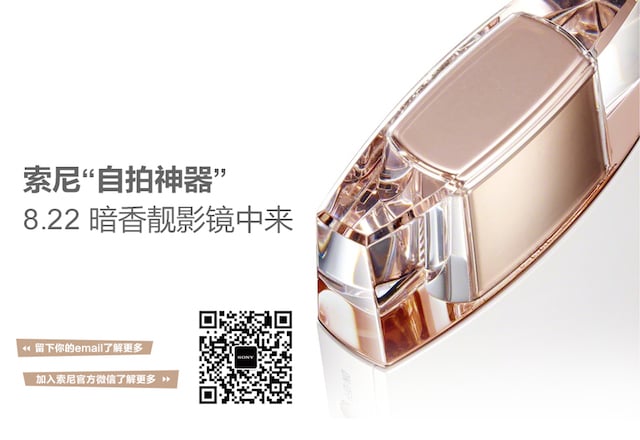 What we know for sure is that this perfume camera — be it the KW1 or not — seems to be a very real thing, teased by Sony itself alongside an announcement date of Friday, August 22nd.

It will supposedly feature a 19.2MP 1/2.3-inch (curved) sensor, two f/2 conversion lenses, OIS, a built-in ND filter, 3-inch 1.23M-dot LCD, and built-in WiFi and NFC. Here are a couple more pictures floating around the Chinese forums that show the camera in action:

Chances are good this camera is a niche product that will never reach US or even European soil. But beyond the gimmicky design, the report that it will feature Sony’s first curved sensor is the reason why it is making waves among serious photo nerds.

It means Sony really is ready to mass produce. And the next curved sensor might be the rumored full-frame version that is supposed to appear in an upcoming version of Sony’s fixed-lens RX1. As always, stay tuned and we’ll be sure to keep you up to date.

(via Engadget and Sony Alpha Rumors)

What Photographers are NOT Considering When Using High ISO