Bullet time isn’t anything new, but where most of the recent examples show how you can use relatively inexpensive phones or GoPros to create the effect, this BTS video shows how Canon helped put together a crazy bullet time photo shoots that went radically in the other direction.

The BTS video above was released in November of last year and shows the kind of work it took to orchestrate a shoot of this magnitude on the banks of the Aare river in Bern. 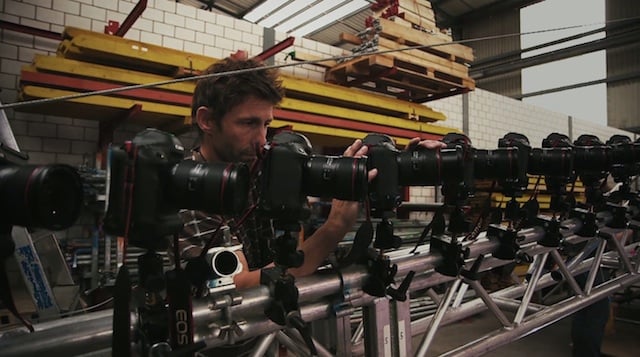 All the cameras had to be unpacked (it took six people all morning just to do that) set up on the 65-foot long rig, aligned properly, have all settings properly adjusted, linked together, and then actually used with the remote trigger to capture the final shots.

You can read more about the process and see the photos here. And once you do, let us know what you think of the final product in the comments down below. Was it worth using nearly $500K in gear, or could they have gotten essentially the same results with more affordable options?

(via The Digital Picture and PopPhoto)

Video: Capture Slo-Mo Footage on the Cheap with the Casio EX-F1