Just the other day we shared an awesome ‘hack’ of sorts to get up to nine times as much battery life out of your camera using an external battery. And today we have another hack, albeit one that’s a bit more involved and uses extra batteries you might actually have laying around the house.

Rather than summarizing the above video in my own words though, I’ll leave it to Caleb of DSLR Video Shooter to explain what’s going on:

I recently purchased this NP-F970 Battery Adapter that is compatible with Canon DSLRs. I was a little worried about the quality from the pictures online but I thought I’d take the plunge and share my findings with you guys. After receiving the unit, I hooked it up with 2 Sony NP-F970 batteries and let if run all day with the camera recording AND powering my monitor… 8 Hours later, I called it a day and decided I like this thing. I still haven’t fully tested the unit to see how long it would power the camera and accessories but it’ll give you a full day at least.

In all, the equipment you’ll need should cost you less than $150. 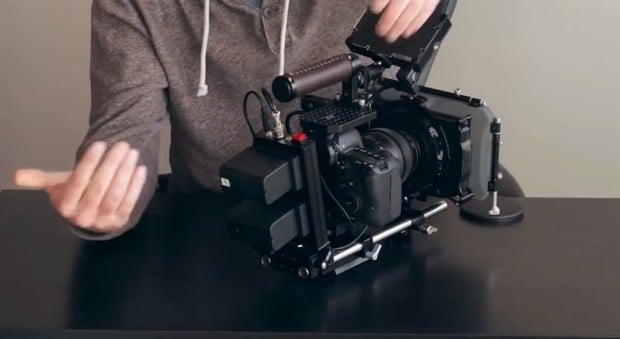 Considering that not only is the camera being powered, but it’s also an external monitor, this hack is extremely impressive. As with the last hack, this could most certainly be used for still imagery in addition to filmmaking — particularly in the cases of timelapses or otherwise remote shooting options that involve long spans of time.

Give the six minute video a watch and whether using it for stills or video, this little hack is sure to help you make the most of your gear.

Fujifilm Launches Its Own Camera Lens Rental Service in Japan