If you’re going to illegally climb tall buildings and other structures, and then do backflips while you’re up there, expect to attract some attention of the police variety. But here comes the pro tip: when you do get caught, telling them you were taking ‘panoramic photos’ won’t get you out of trouble if they saw the backflips.

In the video above, self-styled “professional adventurer” James Kingston and his friend Mustang Wanted take us to the top of the Moscow bridge in Kiev where they proceed to make you queasy by dangling off the edge and doing backflips (not at the same time). Then they come down right into the waiting arms of the police. 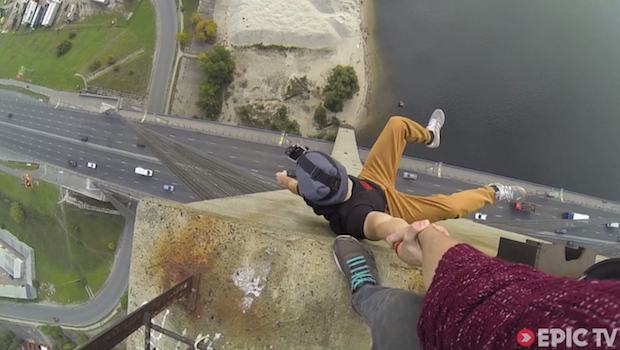 Their excuse when they ran into the cops was that they are photographers taking panoramic photos, but even if that was going to get them out of it, the whole argument falls apart when the cop asks “why was he doing somersaults up there,” and one of them replies “because he’s an English Spiderman.”

Funny, this might be the first video we’ve ever seen that captures, not only a rooftopper/freerunner’s ascent and descent from a high place, but also their arrest for doing something illegal.