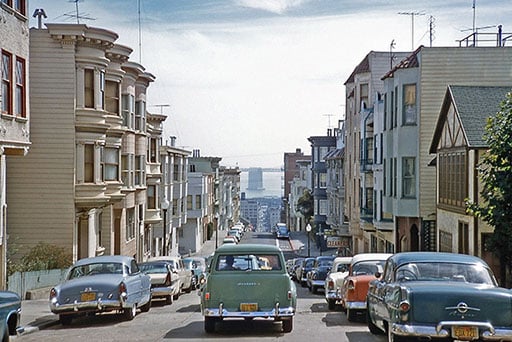 Here’s a pretty fascinating little story of two men with cameras being in the same place at around the same time, over half a century ago. One of the men was Alfred Hitchcock.

The story began over at the vintage photography blog Shorpy, where a member named Ron Yungul submitted the above photograph. It was captured by his late father on the hills of San Francisco in 1957.

Yungul writes that his father captured the image in August of that year with a Contax camera and Kodachrome film. The Bay Bridge can clearly be seen in the background.

After the photo was published, a Shorpy commenter named dustybroome noticed that the photo looked similar to a shot in the 1958 Hitchcock iconic film Vertigo, which was also based in SF. He writes,

Looks like Alfred liked this view of the bridge. He used the same intersection in the “Vertigo,” where Jimmy Stewart was following Kim Novak about 54 minutes into the film. He must have seen the film or been a location scout. Pretty amazing coincidence.

and here’s a still of the film he snapped showing what he meant: 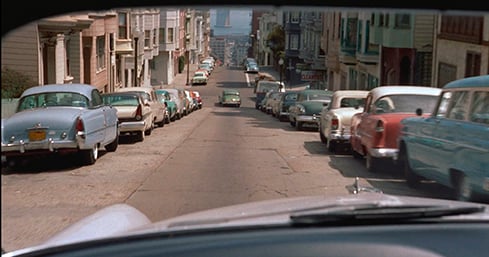 Here’s a larger movie still captured a moment earlier in the film: 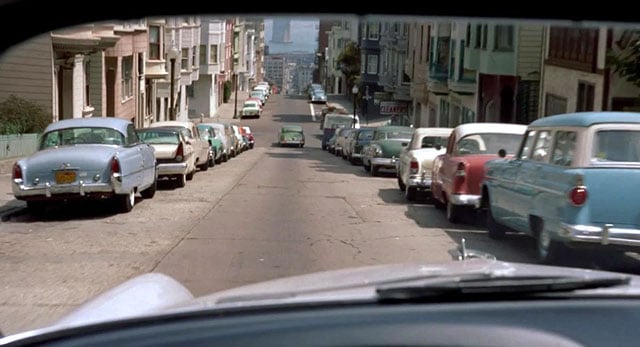 But wait! Compare the two shots a little more closely, and you’ll see that they are nearly identical. The cars, the shadows, and everything else in the scene are pretty much in the same positions.

In other words, Yungul’s father must have captured his photograph within minutes of Hitchcock passing by and shooting his.

Head on over to Shorpy and check out the post’s comments to see how the conversation unfolded as this coincidence came to light.