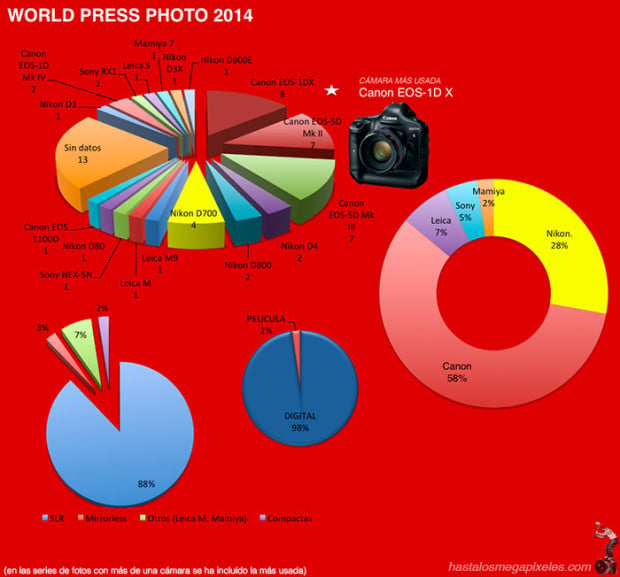 Each year, the breakdown of gear usage statistics by some of the largest news agencies and associations makes itself public; and this year is no exception, thanks to this infographic provided by hastalosmegapixeles.

Looking through the infographic, we get a great look at what gear the press photography pros prefer when they’re out in the field shooting World Press Photo award-winners.

Most will agree that while gear is certainly one element to creating an image, the mind behind the camera plays the more important role. Still, human element aside, lets indulge our natural curiosity and find out what gear is most prevalent on the professional stage. 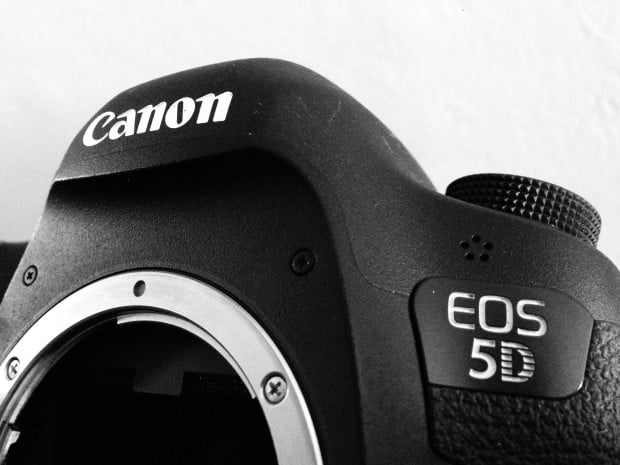 Leading the pack is the Canon 1DX, which takes the cake as the most used camera body, while the six-year-old 5DMII and its successor, the 5DMIII, tie for second place. Nikon manages to grab positions 4 through 6, with the D4, D700, and D800 taking those respective positions. The remaining systems are a conglomeration of Canon, Nikon, Sony, Leica, and Mamiya.

Overall, Canon is the easy frontrunner here, managing to grab up 58% of the market share and leaving only 28% for Nikon, 7% for Leica, 5% for Sony and 2% for Mamiya.

Also notable is that despite mirrorless cameras gaining market share among the masses, mirrorless systems make up only 3% of the cameras used, with SLRs making their dominance known at a whopping 88%. The remaining 9% is divided up between compact cameras (at 2%) and “others” (coming in at 7%), which represents various rangefinders and more. 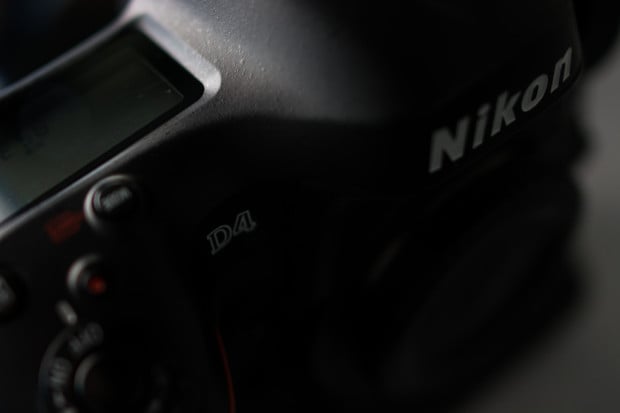 Interestingly, even with the insane turnaround times expected from photographers in the field, there are still a select few who use film, with 2% of the photographers making use of the analogue medium. While not an overly substantial number, it’s refreshing to see film being used, especially at some of the larger events, as we’ve shared before.

Beyond the above information, which is what we’d likely expect, there are a few anomalies worth pointing out. The first is the use of the Mamiya 7, which is a rather impressive medium format rangefinder. The second is the use of comparatively older and/or lower-end camera systems, such as Canon’s Rebels and the Nikon D80. It’s possible these systems are being used for remote situations, where a pro body is too large and cumbersome; or that since the price is lower, photographers are more apt to take them into dangerous situations — but that’s just speculation on our part.

A big thanks to hastalosmegapixeles for gathering the information and creating the infographic, as visual representations of numbers are always appreciated by us photographers. Speaking of which, be sure to let us know your thoughts on the numbers in the comments below.

(via hastalosmegapixeles via The Phoblographer)

Image credits: Infographic by hastalomegapixeles and Nikon D4 by htakashi