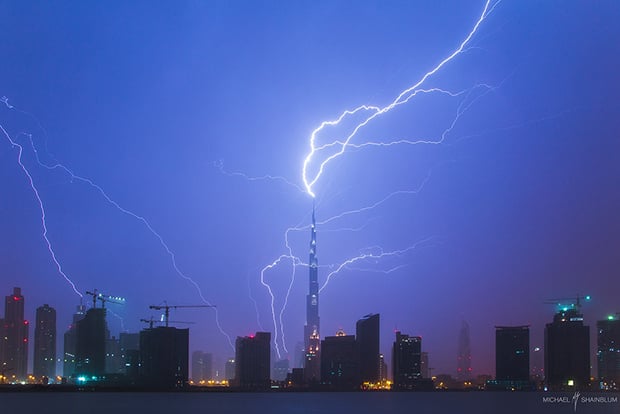 Michael Shainblum captured this perfectly timed (call it luck if you want, but luck favors the prepared, so we’re going with perfectly timed) shot of lightning striking the Burj Khalifa during a storm on Wednesday of last week.

Shainblum was in Dubai with friend and colleague Brian Hawkins (who, incidentally, captured this great time-lapse of the storm) shooting time-lapse footage in the rain with two cameras when the lightning strike happened. The downpour had soaked one of his cameras through, but he was able to pull this shot out of the other. 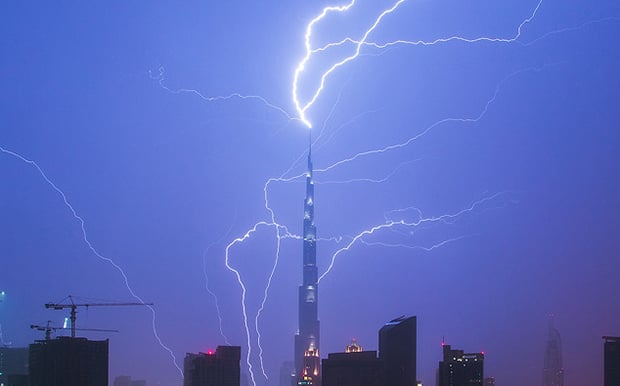 According to Slate‘s Phil Plait, what you’re seeing in the image are mainly ‘upward streamers’ and not ‘lightning bolts’ as it were:

Lightning moves downward from a cloud through a series of “step leaders,” short strokes of ionized gas. When a leader nears the surface, the ground reacts by sending up a short streamer. If the two connect, BANG! Leaders and streamers are much weaker than the actual lightning stroke, so I suspect that’s what we’re seeing, especially since so many of the zig-zagged streamers are connected to the ground but not the cloud. Amazing.

Image credits: Photograph by Michael Shainblum and used with permission

Will It Beard: Fun Photo Series of Random Household Items Stuck in a Man’s Beard