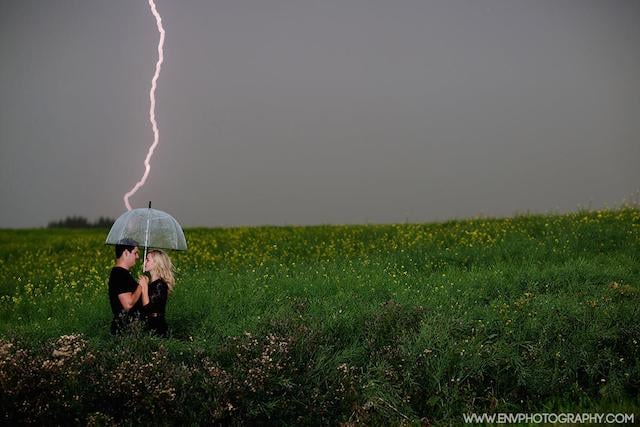 First things first: the photo above isn’t a composite. In fact, as Elizabeth van der Bij of ENV Photography jokingly explained in the comments on her Facebook page, her Photoshop skills “suck”, so she couldn’t have faked it even if she had wanted to.

No, the Alberta-based photographer and the couple, Kassandra & Craig, simply stuck it out and kept taking pictures as the storm approached until, as luck would have it, the Universe delivered in a big way.

So really, this is a mix of both luck and patience. To hear her tell it, the lightning was pretty far away when this photo was taken, but it was moving towards them “super fast” so time was running out before they’d have to go. But even with the goal of getting a great lightning shot in mind, van der Bij never expected something quite so spectacular.

“There’s about 30 others when the lightning didn’t strike just like it,” she writes. “We were hoping to get lightning in the background, but didn’t think it would end up looking like that!”

To see more of Beth’s photography, or if you’re in Alberta and you’re in need of a photographer who clearly has luck on her side, head over to the ENV Photography website or give her a follow on Facebook.